Vikings Built Boat in Icelandic Volcano to Keep It From Erupting

Sacrificing a female virgin (or any old human) to appease an angry volcano god sounds more like a movie plot than an actual practice … because that’s what it is. Despite flicks like Bird of Paradise, starring Dolores del Rio (who, after a pre-Hollywood code nude swim, sacrifices herself to a volcano) and Joe Versus the Volcano (Tom Hanks and Meg Ryan jump into a volcano but … see the movie), there are no confirmed accounts of any cultures that practiced this form of sacrifice. However, many believed in volcano gods. That includes the Vikings who settled in Iceland 1,100 years ago – just before a major volcanic eruption. That scared the Vikings into building a ship in a cave near the lava field to appease the volcano, and new research has confirmed the dates and the purpose of the ship, along with the bones in the cave. Bones? 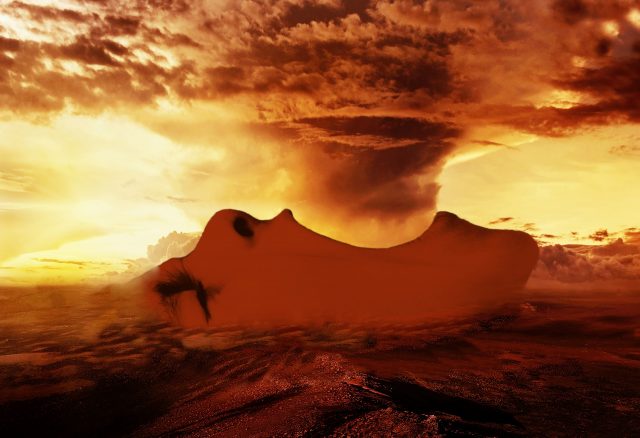 As described in a new study published in the Journal of Archaeological Science and reviewed in Live Science, Surtshellir is a 1600 meter (1 mile) long lava tube cave in the Hallmundarhraun lava field formed from an eruption that began around 930 and lasted several years. About 300 meters (985 feet) In and 10 meters (32 feet) deep is a very strange Viking archeological site. Strange because it was made by humans out of rocks in the shape of a Viking ship. Even stranger because, in addition to the burned bones of sacrificed animals, it contained beads from Iraq and orpiment, a mineral from eastern Turkey. Kevin Smith, deputy director and chief curator of the Haffenreffer Museum of Anthropology at Brown University and leader of the new expedition into the cave, was shocked. What were these objects from the Middle East doing in an early Icelandic settlement?

“… it was associated with actions directed towards an elemental being – Surtr – for whom the site was named and who, according to medieval Icelandic accounts of Viking Age mythology, was present at the world's creation and would destroy it after the battle of Ragnarök.”

Surtshellir is named for Surtr, a mythological Norse giant whose mission is to kill all the gods and end the world in flames. Seeing the volcano shortly after they arrived, the Vikings immediately thought Surtr was in the volcano and they needed to come up with a way to stop him. According to Norse mythology, Surtr’s enemy was Freyr, the god of harvests, wealth, fertility and peace. The only way they could help Freyr was by feeding him so they sacrificed animals in the lava tube he would enter through to find and defeat Surtr. The stuff from the Middle East was just extras in case the beef, pork, sheep and elk weren’t enough. The volcano god sacrifices continued until about 1200 when Iceland converted to Christianity – one of the last objects placed in the stone boat was a "set of scale weights with one in the form of a Christian cross."

Proving that old beliefs are hard to break, even under the oppressive hand of religion, the study found one from Surtshellir that continues to this day:

“One Icelandic tradition considers the cave to be "the place where Satan would emerge on Judgment Day."”

Has anyone considered a giant plug?

The Weird History of Cryonics, or Freezing People to Bring Them Back to Life in the Future