Wild rabbits have been busy conducting archaeological work on an island off the coast of Wales. According to the Wildlife Trust of South and West Wales that manages Skokholm Island (also called “Dream Island”), the rabbits dug up a 9,000-year-old tool from the Stone Age as well as a 3,750-year-old piece of pottery that is believed to have been part of a broken urn from the Bronze Age.

While similar objects have previously been discovered on the United Kingdom’s mainland, this is the first time that they were found on Skokholm Island which would suggest that ancient humans did inhabit (or at least visited) the island at one time.

There has been some evidence found that pointed to humans inhabiting the island thousands of years ago although very little information is known about them. Then in 1324, the island began being used as a rabbit farm for the next 200 years. 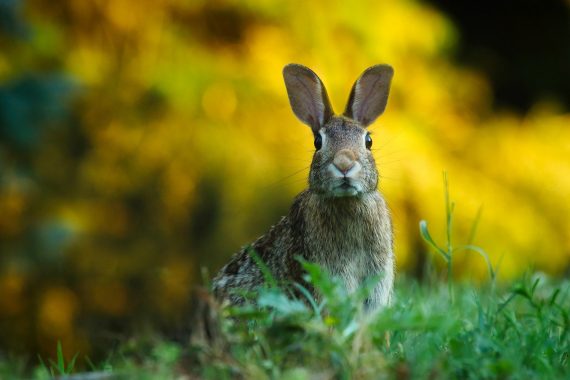 In a March 16th blog post, wardens Richard Brown and Giselle Eagle described how they found a smooth, oval-shaped “pebble”. After sending pictures of the object to Toby Driver, who is an archaeologist with the Royal Commission, Wales, he decided to contact a prehistoric stone tool expert named Andrew David and he knew exactly what they had found.

In an email to the wardens, David described in detail what they had discovered (thanks to the rabbits of course), “The photos were clearly of a late Mesolithic (Middle Stone Age) ‘bevelled pebble’, a tool thought to have been used in tasks like the preparation of seal hides for making skin-clad watercraft, or for processing foods such as shellfish, among hunter-gatherer communities some 6,000-9,000 years ago.”

He went on to write, “Although these types of tools are well known on coastal sites on mainland Pembrokeshire and Cornwall, as well as into Scotland and northern France, this is the first example from Skokholm, and the first firm evidence for late Mesolithic occupation on the island.”

Just days after finding the tool, the wardens returned to the location and found the rabbits had dug up another interesting artifact that ended up being a piece of pottery that broke off of a decorated thick-walled pot presumably used as a vase urn during the Bronze Age. While the deceased were frequently cremated and put in urns in western Wales during that time period, the fact that the pottery piece was found on the island is the first evidence of such an event happening there.

The wardens are very excited with the discovery (again, thanks to the rabbits) as they stated, “It is rather mind blowing that for thousands of years, people have returned to this same area, some of them perhaps working at seal skins, perhaps building skin boats, others burying their dead.”

Driver noted, “It seems we may have an early Bronze burial mound built over a middle Stone Age hunter-gatherer site, disturbed by rabbits,” adding, “It's a sheltered spot, where the island's cottage now stands, and has clearly been settled for millennia.” The Royal Commission, Wales, is planning on conducting archaeological work on the island over the summer.

Pictures of the artifacts can be seen here.