“The residents of the Monteagudo neighborhood in Santa Cruz, Bolivia, are convinced that a few nights ago an alien with an appearance similar to the mythical "chupacabra" visited the area.”

“The being has very large eyes, but they claim that it lacks vision, and that it has hands with three fingers. Prior to its appearance, the neighbors observed a UFO shaped d in the sky . halo of light that landed on the spot.” (Google translation)

Telemundo and other media sites are reporting on a recent UFO sighting in Bolivia with numerous witnesses who took photos and videos of the craft, which some said emitted a thunderous noise and spewed or ‘threw’ fire. They also claimed to have observed an alien from the ship whose characteristics convinced them it was a Chupacabra, the legendary bloodsucking cryptid. Is Could this finally solve the mysteries of the Chupacabra, UFOs and aliens all at once? 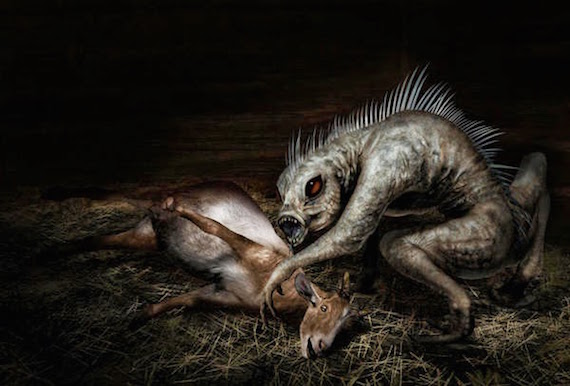 “According to the residents, after the outbreak the alleged alien was seen wandering the streets and they say that he had a resemblance to the legendary 'Chupacabra', frightening children and young people. According to the same neighbors, minutes after his supposed disappearance, the light in the sky went out, leaving traces in the form of circles in the grass.”

Those up on their Chupacabra lore know that the ‘real’ goat-sucker was first reported in Puerto Rico in 1995 after goats and other small livestock were found dead in the towns of Morovis and Orocovis with strange marks on their necks and allegedly drained of blood. Some looking for a plausible cause or explanation connected this to a widespread report in 1984 of a UFO crashing in Puerto Rico’s El Yunque rainforest – a circular UFO that allegedly contained chupacabras which NASA, the U.S. Air Force, and the CIA allegedly picked up along with the crashed UFO. Other connected it to an incident in 1957 when a UFO reportedly crashed in Canovanas, and the dead and alive Chupacabras found at the site were taken to the Roosevelt Roads Naval Station in Ceiba.

“Aliaga, who is dedicated to paranormal issues, asked scientists for help to study what happened, but a psychologist suggests that it is a collective stress and that the inhabitants should receive attention in the face of what happened.”

Javier Aliaga, identified as a ufologist, may have heard about the origin story of the Chupacabra, but whatever he said to local authorities was not enough to convince them to call in the Bolivian Air Force or their equivalent of the CIA or NASA. Instead, it seems a psychologist attributed the stories to mass hysteria – despite the videos and photos of UFOs and the drawings of the creatures (see them here) made by witnesses, who described the ‘alien’ as approximately 30 centimeters (12 inches) tall, with an oval head, large eyes and three fingers on its hands.

Has Puerto Rico’s alien Chupacabra returned? There’s far from enough evidence to confirm this or identify the flying objects in the videos and photos. More investigation is obviously needed. In the meantime, the witnesses on the news report look and sound like they saw something they won’t soon forget and would probably like some answers. Good luck with that.

The Strange Tale of Violet Jessop, the Unsinkable Woman