A Bizarre Encounter with the Mysterious Kappa River Imp of Japan

The rivers and lakes of Japan have long been the haunts of a wide variety of strange creatures of all shapes and sizes. Although many of these have been relegated to the realm of pure folklore and myth, there are others that have transcended beyond mere legend and become thought of as something more cryptozoological in nature. One of the most well known of these is a mysterious, bipedal water dwelling creature known as the Kappa, which has skyrocketed past its origins as local folklore to become legend, a pop cultural icon, and a genuine cryptid all at once. The Kappa is one of many types of water imps long featured in Japanese folklore said to inhabit the lakes and rivers of this island nation. The appearance of the Kappa varies from tradition to tradition and area to area, however they are typically described as being the size of a child of 6 to 10 years of age, and resembling a cross between a turtle, monkey, and lizard. Kappa are often depicted as having a shell on their backs, similar to a turtle’s, having large, webbed hands and feet, and having a beak like mouth which depending on the tradition may or may not contain rows of sharp, shark-like teeth. Some reports have made mention of patchy, scraggly hair covering the body as well.

One of the most prominent and odd features that is shared throughout all Kappa folklore is the presence of a bowl on the top of the head, which is said to contain a liquid that gives the Kappa its supernatural strength. When confronted by an angry Kappa, the best way to defeat it is to have it bow, upon which the liquid will spill and weaken it, allowing the typically formidable creature to be defeated. Kappas are most often described as being malevolent entities, with a penchant for mischief and violence. They are said to molest women as well as harass travelers and challenge passerby to sumo matches. In the more sinister and darker tales, Kappa are represented as murderous monsters which attack humans, cattle, and horses, pulling them to their deaths below the water and sucking the blood or life force from their bodies to leave a lifeless husk. It is said that one should not venture to the water’s edge alone lest you be the victim of a Kappa attack. A rather gruesome detail of these attacks is that it is often mentioned that the creatures have a penchant for sucking a victim’s entrails out through the anus. 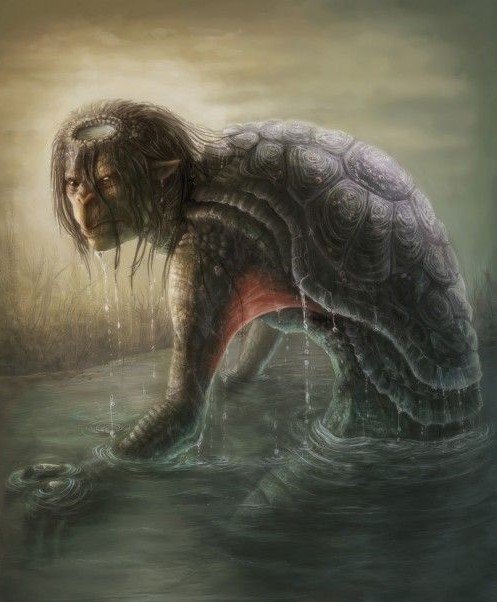 Despite this ferocious and rather unappealing image, Kappa are said to have a benevolent side as well. For instance, they are said to display a great talent for medicine and particularly bone setting, and it is said if a Kappa is captured it will offer its services to its captor in return for release. They may also take mercy on travelers that have been injured or are ill and nurse them back to help. Kappa purportedly abhors metal and loud noises, and love cucumber to the point of obsession. This craving for cucumber is supposedly so strong that Kappa will do anything to get it, and in the past many residents of supposedly Kappa infested areas would carry cucumber with them in the hopes of bribing the beasts into leaving them alone or even procuring their medical talents. Yet for as completely folkloric as this all sounds, there have been plenty of very real reports of people seeing these things, and one of the most detailed and amazing of these I’ve seen was relayed directly to me.

The witness does not want to give his real name, let’s call him “Taro,” nor does he wish to divulge the exact town where this took place, but it is a very rural hamlet located along a prominent river, where he lived in a modest house right near the water. He says it started when his 10-year-old son came home from exploring down by the river one evening at around dusk. The boy seemed to be in an agitated state, and when asked what had happened, he excitedly told his father that he had seen a strange figure down by the water, but that it had been naked with green skin and a face like a frog and large “sad eyes.” This figure had been standing on a rock by the riverside, and had then dove into the water to disappear. It was an odd thing for the boy to say, as he was not prone to making up tall tales, and the witness went out to where the boy claimed to have seen it. There could be found no trace of anyone there, but in the dying daylight he could see that the top of the rock was wet, as if something from the water had indeed been standing there. The boy insisted that it was all real, but at the time the father assumed he must have made a mistake. However, whatever it was did not seem to be gone after all, as he would learn in the coming days. 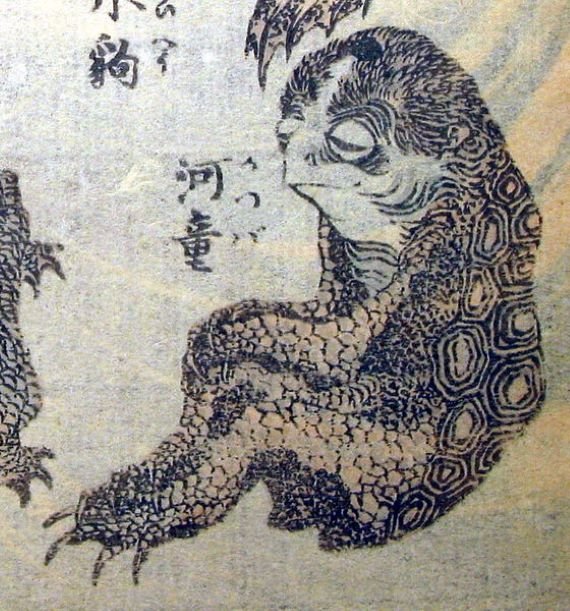 That following weekend, Taro went to the riverside in order to do some fishing, as he did almost every weekend. It was a warm, clear day, that turned out to be good for fishing, as he quickly managed to catch a few to put into the bucket he had with him. There was a pool he wanted to go try out not far away, so he carefully made his way along the rocks, leaving his bucket behind in order to better be able to maintain his balance on the treacherous rocky shoreline. He managed to reach the pool and cast his line in. This was an extremely rural area, with no one else but him out there, so he relaxed and took in the sounds of the countryside, the insects, birds and buzzing cicadas forming a tapestry of sound, but one sound jolted him in how out of place it was. He would explain it as a sort of loud, sharp croak, following by what sounded like a deep clearing of the throat, and it sounded like it was coming from back where he had left his stuff. Taro would tell me:

At first I could see nothing, and then I heard that croak again, louder this time and not like anything I’d heard before. I knew something had to be there, maybe someone else at the river, so I began making my way back out of curiosity. That’s when I saw it. It slowly crept out of the water and I was shocked by what I saw. It was short, child-seized, with glistening greenish skin, not scaly, but perhaps more like rubber. It had a round body with a pot belly and long, sinewy arms that ended with webbed, oversized hands. I couldn’t see the legs yet. Its face was as my son had said, like a frog, only with an extended muzzle similar to a dog’s. It had no ears that I could see, and two holes in its muzzle that appeared to be nostrils. The mouth was exceptionally wide, the eyes very large and round. The creature was looking right at me. It croaked again, in what I now think was a warning to me. I stopped in my tracks. The thing then crept slowly out of the water on two long, tapering legs, but one of the legs seemed to be injured, as it appeared to limp along. It went right up to my bucket of fish and stared at it with those big eyes, then stared at me again to croak again before reaching into the bucket to take one of my fish, which it shoved into its mouth before taking another. After that it croaked one last time and slipped into the water to disappear. I soon realized that I knew exactly what it was I had seen. It was a Kappa.

He would examine the area where it had been to find odd tracks with webbed feet unlike anything known to exist there. After this the Kappa would disappear off into the ether, never to be seen again, leaving plenty of mysteries in its wake. It is curious in that this one seemed to have been injured, and perhaps even showing some sort of communicative thanks for the free fish, odd details to say the least. It is remarkable, and not only the most detailed Kappa sighting I've ever seen, but also somewhat sad and tragic. One wonders if there was anything to this all, and if so just what happened to this creature after that. It certainly seems to point at perhaps a real cryptid lying at the source of the legends, but what could such a beast possibly be? The answers may be vague, but the Kappa lives on, and this legendary creature continues to make itself known from time to time.