Bizarre Cases of Bigfoot and UFOs

The Bigfoot phenomenon is already inherently strange enough as it is. Here we have cases of an apparent enormous hairy bipedal ape-man roaming the wilderness that has managed to remain hidden and elusive for a very long time. The traditional view is that this is a flesh and blood animal of some sort, and that its ingenuity and remote habitat has helped it to remain evasive to efforts to find it. Yet, the phenomenon seems to go deeper than that, as cases have spread into the realm of things that don't seem to really fit in with this assumption, including invisible or vanishing Bigfoot, and even stranger still those that have been sighted in conjunction with UFO activity. Such accounts really serve to make the whole phenomenon even more bizarre than it already is, and reports of Bigfoot and UFOs remain among the strangest of the strange.

One very odd account that was supposedly actually investigated by the CIA’s Project Blue Book UFO mission allegedly occurred in 1966 at Presque Isle State Park, along Presque Isle Bay on Lake Erie, in Pennsylvania. On the evening of July 31, 1966, some visiting tourists were driving at a beach there when their car got stuck in the sand and one of them went to go get a tow truck. A passing police car stopped to help them, and came back a little later to check on them, and that was when the four tourists and two police officers all witnessed a strange light over a patch of nearby forest, and the policemen and one of the group, a man named Douglas Tibbets, went to check it out as the others waited behind. Things would get very strange from there.

The investigating group had only walked a few hundred yards when they could hear the car honking wildly behind them. When Tibbets and the two officers got there, the others were very agitated and scared. They would claim that they had seen what they described as a “dull black shape, bigger than a man, big head and shoulders, arm-like appendages, no hands, no face visible, as though it had its back turned.” The creature had appeared in front of the car to loom over them before moving off into the night in the direction of where the mysterious light had been seen. After this, a craft with blinking orange and red lights had allegedly come down to land on the beach while tracking the figure with a beam of light. Police would go back to investigate the following morning to find some anomalous triangular indentations in the sand, somewhat corroborating what the women said they had seen. 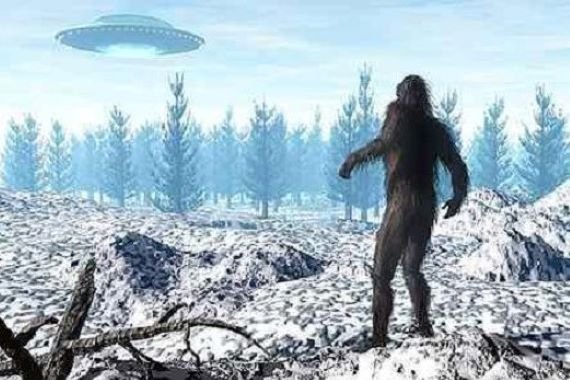 What was going on here? For some reason, the year 1973 would produce numerous reports of what appear to be Bigfoot and UFOs together. From the files of researcher and author Albert S Rosales comes several that occurred in early September of that year. One of these happened near Penn Township, Pennsylvania, when three women driving along through a wooded area passed by a massive rectangular object that appeared to be metallic and was resting upon the ground. It was such an odd sight that they stopped the car to see what it was, and at that instance a ramp descended from the craft. As the women looked on in awe, three seven-foot tall hairy ape-like creatures reportedly came barreling out of the craft down the ramp to go running off into the woods. That same month, on September 27, 1973, two girls playing outside in Beaver County, Pennsylvania were startled to see an 8-foot-tall, hairy humanoid with glowing eyes run past them into the woods. According to the witnesses, it was holding some sort of glowing sphere in its hands. One of the girls’ fathers went to investigate and came back visibly frightened, although he refused to say what he had seen. Interestingly, it would turn out that other locals had seen a silvery object shooting a beam down into the woods at approximately the same time as this sighting.

The following month, one well-known such report occurred on the night of October 21, 1973, when a Mrs. Reafa Heitfield and her 13-year-old son were asleep in their trailer in Cincinnati, Ohio. When Heitfield woke in the middle of the night to get a glass of water, she claims that she saw a series of inexplicable lights out in the parking area, one of them being a cone-shaped construction of light. When she peered outside to see what the lights were, she reportedly saw a huge, ape-like beast with grayish hair covering its body, which then entered the light before it and the UFO shot off into the night. In that same year there was the report from a group of farmers in Fayette County, Pennsylvania, who claimed to have seen a huge UFO about 100 feet in diameter, next to which were standing two hairy, ape-like creatures with arms that dangled past their knees and with glowing green eyes. One of the farmers purportedly fired at them with his rifle, after which one of them raised its arm and the UFO shot off into the sky. The two hulking brutes remained, appraised the men for a moment, and then ran off into the forest. 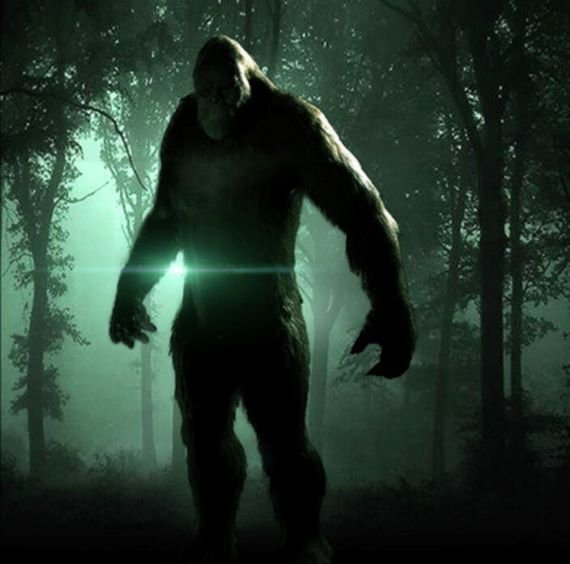 Just as harrowing was a report that came just a few days later, this time also in Fayette County, Pennsylvania. On this occasion, some farmers witnessed a dome-shaped UFO estimated as being around 100 feet in diameter over the road as they drove along. As they approached, they claimed to have seen two “gargantuan creatures covered with thick, matted hair, luminescent green eyes and long arms that dangled below their knees.” The UFO then shot off into the night as the hulking beats lumbered off into the nearby woods. The following year, in December of 1974, there was the very well-known case of dairy farmer William Bosak, who was driving home in Frederic, Wisconsin when he nearly crashed right into a huge spherical UFO sitting on the road. The bottom of the craft was enveloped in a thick mist, and sitting within a glass dome at the craft’s top was a hairy ape-like creature with reddish-brown fur and pointed ears, seemingly at work manning the controls. The craft and its bizarre pilot then blasted off into the night to disappear. I have written a more detailed account of this case here.

Another very weird report comes from 1989, this one also from the files of Albert S Rosales, and it allegedly happened at Tillamook, Oregon. On the evening of September 27, a woman was woken by her daughter telling her there was something strange outside. The woman went to go investigate and was probably not prepared for just how strange it would really turn out to be. When she went out there, she saw a disc hovering over the ground, shaped like an inverted toy top and with a nearly transparent surface. The very weird report continues:

As the woman approached to within 30 feet, a doorway opened, revealing a human-like being of average height, with blond hair, fair skin, and blue eyes, dressed in a silver coverall. At a window next to the door was a “Bigfoot” creature, seemingly seated and visible from the chest up. For the next few minutes, the woman stared at the two, gaining the impression that the “human” was attempting (unsuccessfully) to communicate. Then the vehicle and beings vanished instantly (i.e. without accelerating beyond viewing range). The woman is a psychic and claims to have had periodic encounters with UFOs and “Bigfoot” creatures throughout her life. 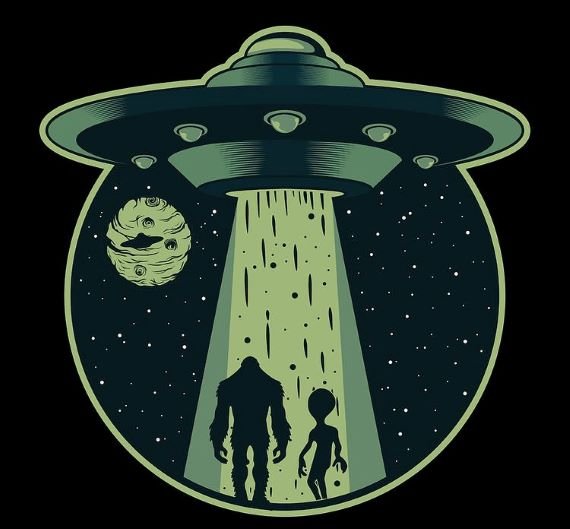 Another baffling account from Albert S Rosales seems to concern hairy hominids that can actually levitate. The incident allegedly happened in January of 1997, out in the remote wilderness of the Chelyabinsk region, in the Urals of Russia. Here lodged within the dense trees was a military radar outpost, and in the early morning hours one of the soldiers stationed there was out collecting firewood on a cold but clear day. There was supposedly lots of snow on the ground that morning, but a clear trail led to the pre-prepared pile of firewood on site. As the soldier began to gather the wood, he then noticed something very peculiar in the form of two hulking hairy humanoids covered in dirty reddish hair standing there within the fence perimeter, one of them gigantic 7.5 feet tall, and the other much shorter, at just under 6 feet tall, and the witness would later speculate that they had likely approached the installation drawn to the smell of breakfast cooking in the nearby kitchen. The odd report continues:

The soldier thought that the taller entity was a female and the second shorter one, probably a child. Both entities had penetrated inside the perimeter of the unit possibly attracted by the smell of the kitchen area. The witness was carrying an axe and for some strange reason was not afraid only curious, and walked towards the creatures in an attempt to obtain a better look. Amazingly he wasn’t able to approach the pair, since both constantly seemed to move ahead of him, he couldn’t make up any ground between them so he increased his pace, but at the same time the entities increased theirs moving quickly away from him. Finally, moving faster and faster the entities jumped up into the air and momentarily the witness thought that the perimeter fence would hinder their escape, but to his amazement he saw how both of the hairy humanoids simply zoomed into the air and levitated over the fence. The humanoids then flew away and vanished above the tall pine trees in the forest which surrounded the military installation. The witness then stopped his pursuit, returned back to the fence and saw two tracks of footprints which were left on the snow. The layer of snow was thick and strong, evidently the tall hairy humanoid was very heavy. However, the footprints seemed to become dimmer and less deep as they neared the fence, indicating that the humanoids apparently began ascending into the air.

Such completely bizarre and surreal cases, as well as talk of Bigfoot in relation to UFOs in general, have generally rubbed those in cryptozoology the wrong way. Talking about such things will get you laughed out of most Bigfoot conventions at best, and it is a touchy subject to bring up with Bigfoot researchers. There is the entrenched idea that these must be undiscovered apes, and therefore flesh and blood animals of this earth. Yet these reports exist, and cannot be all just swept under the carpet in order to embrace one particular theory. Perhaps they could both exist in harmony, and maybe these cases represent something other than another real flesh and blood creature, but even then what are we looking at here? Are these aliens, interdimensional interlopers, or merely figments of the imagination? Such cases sit like unsettling, unwelcome guests within cryptozoology, but they are hard to ignore. Whatever the case may be, whether they are real or not, they are very weird cases that serve to stir up the pot and bring the realms of cryptozoology and ufology crashing together, for better or worse.