Creepy Caves and the Creatures That Lurk Within Them: The U.K. Cases

The fact that so many so-called "Cryptid" creatures (such as Bigfoot, the Loch Ness Monster, Orang-Pendek and so on) have yet to be found with 100 percent certainty may be because they spend most of their time in deep caves, caverns and tunnels. Granted, it's just a theory, but if nothing else it's an intriguing theory. I'm splitting this article into two parts. The first tackles such situations and stories in the U.K. and the others from the United States . Today, let's take a look at some of the U.K. cases and incidents that suggest at least some strange creatures live deep below the surface of our world. It transpires that for a number of years, sightings have been made of a creature sounding suspiciously like Bigfoot from within what is left of none other than Sherwood Forest, England. A Royal Forest located in Nottinghamshire, it was - a curious and swirling mix of history and mythology tells us - the home of the famous and heroic Robin of Loxley, far better known as Robin Hood. Chris Mullins, who has investigated many reports of Bigfoot in Britain, said of the Sherwood Forest controversy that: "While having some reservations myself, I believe it’s feasible. Wild men could still exist in our time. Notts [Nottinghamshire] and Derbyshire are known for their underground caves and catacombs, explored and unexplored, and the woods could conceal a lot."

Moving on, let us now turn our attentions to the haunting wilderness of North Wales. Oll Lewis, a key and integral player within the Center for Fortean Zoology, has investigated a fascinating old legend pertaining to what can only be termed a definitive Welsh wild man. Oll reveals that villagers in Nant Gwynant – which is a truly picturesque valley situated in Snowdonia, Gwynedd, North Wales - have for many a century told, in hushed tones, a turbulent and nightmarish story of definitive British Bigfoot proportions, and of how a dark and mysterious cave in the old valley – the Cave of Owen Lawgoch - came to be known, decidedly infamously so, as the abode of "the hairy man." Now, onto Scotland and the Loch Ness Monsters. Nessie expert Roland Watson talks of " tales of divers being confronted by great cavernous underwater caves and ashen faced divers racing to the surface after being terrified by giant eels." 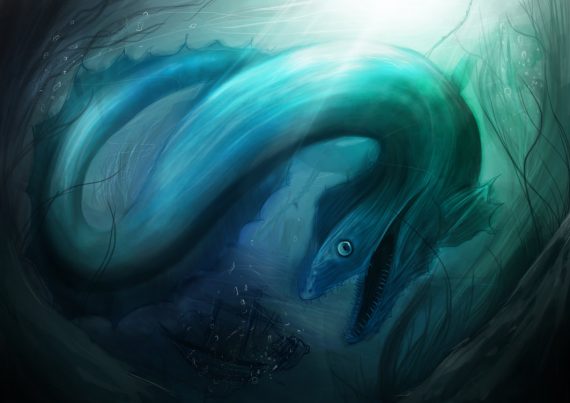 Preserved in an eight-page chapbook in the Pearse-Chope collection at Bideford, England is a sensational and controversial story of one John Gregg and his assorted family of murderers and thieves. The text is estimated to date from the latter part of the eighteenth century and it recounts the story of how the Gregg family took up residence in a cave near Clovelly on the north coast of Devon in the 1700s, and from where they were to live for an astonishing twenty-five years. So the legend goes, during this period they passed their time by robbing more than a thousand unfortunates, and merrily devoured the corpses of all those they robbed. Such was the horror the story generated that even the king himself – along with four hundred men – allegedly resolved to bring to an end their prehistoric-like and abominable existence. The cave was supposedly discovered and reportedly contained, according to the chapbook, "such a multitude of arms, legs, thighs, hands and feet, of men, women and children hung up in rows, like dry’d beef and a great many lying in pickle." Gregg’s distinctly less than charming family was found to consist of a wife, eight sons, six daughters, eighteen grandsons and fourteen granddaughters all begotten by incest - and many said to have been as mad as hatters - and all of who were taken to Exeter and on the following day executed at Plymouth without trial. Now, let's take a look at another, strange story.

The London Underground’s British Museum Station closed its doors on September 25, 1933. For many years prior to its closure, however, a local myth circulated to the effect that the ghost of an ancient Egyptian haunted the station. Dressed in a loincloth and headdress, the figure would emerge late at night into the labyrinth of old tunnels. In fact, the story gained such a hold that a London newspaper even offered a significant monetary reward to anyone who was willing to spend the night there. Somewhat surprisingly, not a single, solitary soul took the newspaper up on its generous offer. The story took a far stranger turn after the station was shut down, however. The comedy-thriller movie, Bulldog Jack, which was released in 1935, included in its story a secret tunnel that ran from the station to the Egyptian Room at the British Museum. The station in the film is a wholly fictional one dubbed Bloomsbury; however, the scenario presented in the film was specifically based upon the enduring legend of the ghost of British Museum Station.

Oddly enough, on the exact same night that the movie was released in British cinemas, two women disappeared from the platform at Holborn – which just happened to be the next station along from the British Museum. Strange marks were later found on the walls of the closed station, and more sightings of the ghost were reported, along with weird moaning noises coming from behind the walls of the tunnels. Not surprisingly, tales began to quickly circulate to the effect that the police had uncovered some dark and terrible secret - about a paranormal killer on the tracks - that had to be kept hidden from the populace at all costs. Keep a look out for my catalog of caves and creatures in the United States.