Dead Aliens on a Welsh Mountain? A Weird Tale That Never Goes Away

What really happened on the night of January 23, 1974 on the Berwyn Mountains, North Wales? That's a question I often get asked. It very much depends upon your own opinions and conclusions. That something happened is not in any doubt. The theories range from the fantastic to not much at all. Strange lights were seen on the mountains. There was a small earth tremor. There were rumors of military personnel running around. Then, there is the theory that pretty much nothing at all happened - aside from, that is, the presence of a bunch of poachers looking for rabbits with powerful lamps. And, there's the most controversial theory of all: that a UFO from another world slammed into the Berwyns. That's the angle people want to hear about - which is hardly surprising. For years, the story remained fairly obscure. Certainly, there was a lot of coverage - even by the mainstream media - in the days after "it" happened. And a handful of articles were written about the enigma in the 1970s and the 1980s. It was, however, in 1996 when the case was resurrected  - and in an incredible fashion. In 1996, a military whistleblower came forward, claiming that aliens had crashed on the Berwyn Mountains back in January 1974. And he knew all about it.

Allegedly, the pummeled bodies of the dead crew were said to have been secretly rushed to a well-guarded facility called Porton Down (in the southwest of England), for hasty examination and even hastier preservation. As is so typically often the case in such situations, the source chose not to provide his name to the UFO research community of the day. He preferred to lurk in the darkness, shrouded in mystery and intrigue. He shared his story only with Tony Dodd, who was a North Yorkshire police sergeant and a UFO investigator. Dodd chose to give his talkative soldier the alias of "James Prescott," who was said by Dodd to have been long-retired from the British Army. "I cannot named my unit or barracks, as they are still operational," Prescott told Dodd. In a very baffling way - and although the incident on the Berwyn Mountains occurred on January 23, 1974 - Prescott and his colleagues were ordered to be on "stand-by at short notice" on January 18. That was five days before the Berwyns were briefly highlighted in the nation’s newspapers. Prescott got right into the heart of the story: "We then received orders to proceed with speed towards North Wales. We were halted in Chester in readiness for a military exercise we believed was about to take place. On January 20, the communication to us was 'hot.' At approximately 20:13 hours we received orders to proceed to Llangollen in North Wales and to wait at that point."

According to Prescott there was a huge amount of "ground and aircraft activity" over and around those huge mountains. Remember, this was still January 20, according to Prescott – three days before the ground shook those little old villages at the foot of the mountains. Prescott said that on that same night he and his colleagues were given further orders: "We, that is myself and four others, were ordered to go to Llandderfel and were under strict orders not to stop for any civilians," claimed Prescott. On arriving at Llandderfel - a small, Welsh village - they could see soldiers racing around. Senior officers were barking orders here, there and everywhere. Aircraft were zooming across the star-filled sky. And all of this was against a background of overwhelming darkness. Prescott and his colleagues were ordered to haul a pair of large, wooden boxes onto the back of their truck, which they did in rapid-fire time. According to Prescott: "We set off with our cargo and during the journey we stopped to get a drink. We were immediately approached by a man in civilian clothes, who produced an I.D. card and ordered us to keep moving, and not to stop until we reached our destination." 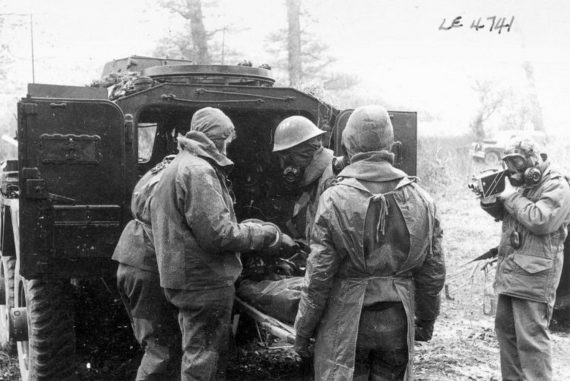 Matters got really weird, as Prescott explained to Dodd: "We were at this time warned not to open the boxes, but to proceed to Porton Down and deliver the boxes. Once inside, the boxes were opened by staff at the facility in our presence. We were shocked to see two creatures which had been placed inside decontamination suits. When the suits were fully opened it was obvious the creatures were clearly not of this world and, when examined, were found to be dead. What I saw in the boxes that day made me change my whole concept of life. The bodies were about five to six feet tall, humanoid in shape, but so thin they looked almost skeletal with a covering skin. Although I did not see a craft at the scene of the recovery, I was informed that a large craft had crashed and was recovered by other military units. Sometime later we joined up with the other elements of our unit, who informed us that they had also transported bodies of 'alien beings' to Porton Down, but said that their cargo was still alive." Prescott finished his sensational story to Dodd by stating that this was "the only time I was ever involved in anything of this nature. This event took place many years ago and I am now retired from the Armed Forces."

This is, of course, a sensational yarn. A weird one, too. The bizarre angle of the military being put on alert several days before the event had even occurred was very strange and, admittedly, difficult to understand. In fact, a careful look at all of Prescott's words shows that Prescott wasn't even on-site when the main events of January 23 took place. Prescott's involvement occurred between January 18 and January 20. Finally: Dodd said Prescott had proof he was in the military at the right time: January 1974. What that proof was, I have no idea. Dodd was very careful about how he chose his words. On top of that, Dodd's dead now. Also, no-one else in the UFO arena ever got to meet Prescott, talk with him on the phone, or have any kind of communication with him. Yes, it's an intriguing story. But, that's really all it can be viewed as. Unless, someone comes forward to add more to the story.