Haunted Queen Mary in Danger of Sinking — Ghosts and All

Over the past year-and-a-half, cruise ships have been haunted by the coronavirus and they may never recover from it. What to do with a cruise ship that’s not cruising? The owners of the luxurious and very haunted Queen Mary – larger and faster than the Titanic (it held the speed record for crossing the Atlantic from 1938 to 1952) – have this problem, but for a different reason. The Queen Mary began picking up ghosts in World War II when it was repainted and repurposed into the ironic “Grey Ghost” troop transport ship. It returned to cruise glory after the war and sailed until 1967, when it was decommissioned. Taken to Long Beach, California, and turned into a museum and haunted hotel as the ghosts decided to stay for free. After almost 55 years, the Queen Mary is in dire need of repairs and runs the very real risk of sinking. Will the ghosts go down with the ship?

“In court documents last week, Long Beach released details from a report by a city-hired naval architecture and marine engineering firm called Elliott Bay Design Group, which inspected the ship on April 28. The inspection found that the ship is in worse condition than previously thought and will need an additional $23 million in urgent safety repairs to keep it viable in the next two years.” 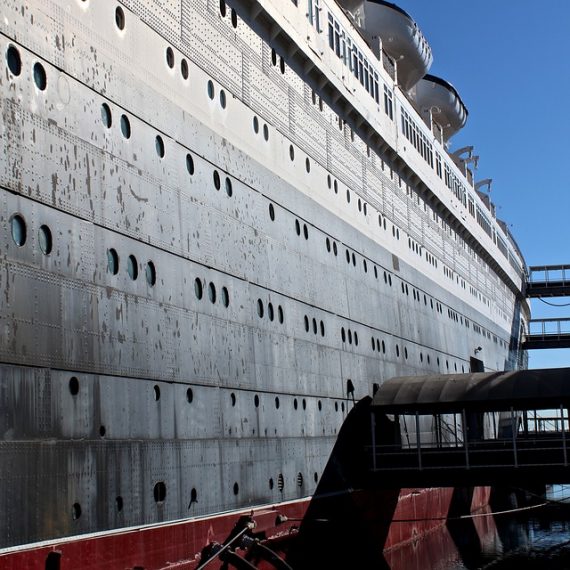 The Long Beach Post reports the hotel has been closed since May 2020 because of the pandemic, but the end of the coronavirus restrictions won’t reopen it. The owner had filed for Chapter 11 bankruptcy because it could not pay for $41 million in repairs needed in addition to the new ones. Structural problems include: leaking pipes and sewage holding tanks; structural and watertight integrity issues in the hull; no working bilge system. Any breach in the hull without a working bilge system could flood and snick the boat/hotel.

And its ghosts. One famous spirit resident occupies Stateroom B340, where faucets turn on by themselves, sheets fly off the beds and carpeting gets ripped – possibly by the ghost of a purser (a ship’s money-handler) who was said to have been murdered in the room. B340 was opened for bookings in 2018. Guests in other rooms could go wandering through the ship and encounter the ghosts of a 17-year old sailor named John Henry who died in a fire during the war, a fireman crushed by an emergency door – the infamous “Door 13” – in 1966, or the many ghosts of women in swimsuits in the first and second class pool areas who continue to splish and splash in old-fashioned swimsuits.

There are many more ghosts on the Queen Mary (read their stories here) which makes one wonder why it couldn’t book enough rooms to stay in business and pay the bills? Perhaps it’s because an old rusting ship floating in what makes it rust more is far more expensive to maintain that a normal brick building. If it does sink, will all of those ghosts go down with it? Where else would they go?

Sadly, this is a case where money and ghosts don’t mix. Throw in local politics – the city of Long Beach owns the Queen Mary and leased it to the failed operators, which is why it’s in court trying to sell the lease which no one wants because the ship is sinking … in case you haven’t been paying attention – and you’ve got a disaster that won’t get a good movie starring Leonardo DiCaprio.

Perhaps the ship and the ghosts could be saved with a screamer movie starring Jamie Lee Curtis. The ghosts might prefer that one.

The Mysterious Drone Swarms of Colorado and Nebraska