It’s a good thing tardigrades aren’t human-sized (or bigger) because there doesn’t seem to be anything that can stop them. Volcanoes? Nope. Toxic chemical vents on the bottom of the ocean? They love it. Outside of the International Space Station? They can’t wait to go back. Now comes word of new tests which found that tardigrades can survive being fired from guns into sand piles. Sand piles? Wait until you find out what this was simulating. Why do scientists hate these little water bears so much?

You may recall the incident in 2019 when Israel’s Beresheet probe carrying a container of tardigrades accidentally crashed onto the lunar surface at speeds reaching 140 m/s, or 310 miles per hour. Alejandra Traspas, a Ph.D. student at Queen Mary University of London, wondered if they survived the impact, and that motivated her and Mark Burchell to come up with the idea of firing tardigrades out of a gun into a simulated lunar surface (pile of sand) at similar speeds and higher. If they did, this could further help promote the idea of panspermia and microbes hitching rides on meteorites to spread life on Earth. The results were published this week in the journal Astrobiology.

Traspas and Burchell used 20 tardigrades of the species Hypsibius dujardini for the experiment. They were first fattened up on moss and mineral water, then placed in a frozen state of hibernation. Two or three at a time were inserted into thin cylinders filled with water, which were then placed inside of a larger cylinder (the ammunition shell) that was loaded into a two-stage light gas gun. The gun was placed inside of a vacuum chamber and fired at a target made of sand at speeds ranging from 1,244 to 2,237 miles per hour (556 to 1,000 m/s). The shells were then retrieved, and the researchers attempted to revive the brave water bears. And? 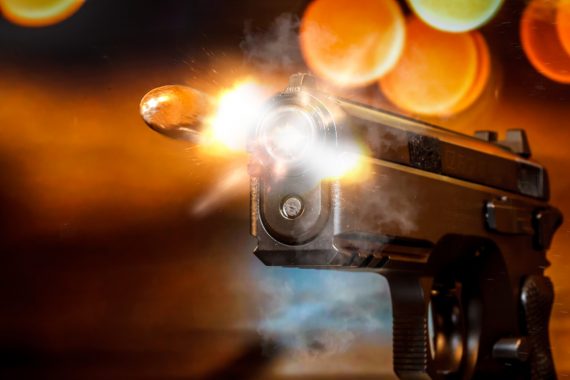 In simple terms, the tardigrades survived being shot from a gun at up to around 900 meters per second (just over 2,000 mph) and impact shock pressures up to 1.14 gigapascals (GPa). After that? Think bugs on a windshield. (Sad photos here.) And, as far as the panspermia theory is concerned:

“Given that the results here suggest that peak shock pressures above 1.14 GPa will kill tardigrades, then it is likely that arrival of a tardigrade on Earth, for example by way of a meteorite impact, is not likely to be a viable means of a successful transfer even for such hardy organisms.”

“Not viable” – a nice phrase for ‘dead’. However, that’s if the tardigrade is riding on the outside of the asteroid, like Slim Pickens riding a bomb in “Dr. Strangelove.” It’s possible that microbes could be cushioned inside an asteroid or traveling at a slow speed than meteorite impacts on Earth – they hit speeds of around 2,460 miles per hour (1,100 m/s). Remember, we’re talking tardigrades here – the most indestructible creature on Earth.

Which brings us back to the Moon and the tardigrades that were on the Beresheet probe. Did they survive? Are they hibernating and waiting for someone to thaw them out? Or did they thaw and establish their own lunar from which they’ll someday launch their revenge attacks on Earth – traveling at speeds of under 2,000 mph, of course.