In June of 2020, an amateur astronomer named Clyde Foster from Centurion, South Africa, made a very significant discovery with his 14-inch telescope when he noticed a strange “spot” located to the southeast of Jupiter’s “Great Red Spot”.

Just two days after Foster’s discovery, NASA’s Juno spacecraft performed detailed observations of the new and mysterious feature. According to Juno’s observations, scientists confirmed that it was a plume of cloud material that erupted over the top layer of Jupiter’s atmosphere. These “outbreaks” sometimes occur in the planet’s latitude band which is called the South Temperate Belt. A few weeks after the plume subsided, it appeared as a dark spot which has been named “Clyde’s Spot”.

Almost a year after the initial discovery of Clyde’s Spot, Juno made its 33rd low pass over Jupiter’s clouds on April 15, 2021, and observed how the mysterious spot has evolved over the past year. 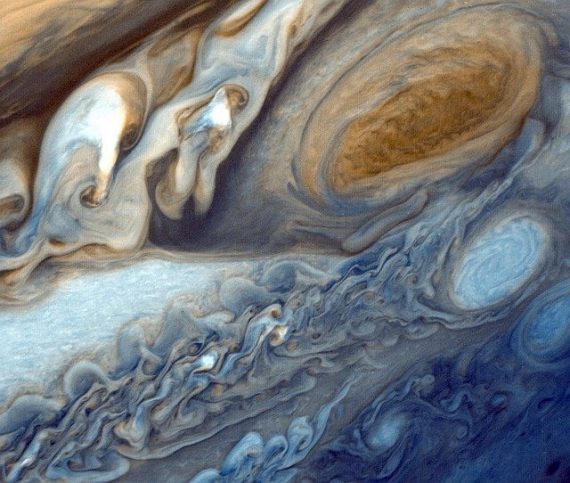 While a lot of Jupiter’s atmospheric features dissipate in a short amount of time, Clyde’s Spot is much different as it has moved away from the Great Red Spot and evolved into a complex feature named a folded filamentary region that is twice as large in latitude and three times as big in longitude as the initial spot. Furthermore, this feature has the capability of lasting for quite a long time.

And it looks completely different. The photo that was taken last June showed the spot as a very compact and oval-shaped feature. The most recent picture from April of this year shows it as more like a bunch of swirls. The two pictures of Clyde’s Spot taken almost a year apart can be seen here.

The Juno spacecraft was launched in 2011 and has been collecting data on Jupiter since 2016. It will continue to study the Gas Giant’s amazing and mysterious atmosphere for a while longer as its mission was extended until the year 2025.

Scott Bolton, who is the principal investigator of the Southwest Research Institute in San Antonio, stated how significant this extension is, “Since its first orbit in 2016, Juno has delivered one revelation after another about the inner workings of this massive gas giant.” “With the extended mission, we will answer fundamental questions that arose during Juno’s prime mission while reaching beyond the planet to explore Jupiter’s ring system and Galilean satellites.”

By orbiting Jupiter for another several years, Juno should be able to analyze and gather much more data about the mysterious Clyde’s Spot. I know that I’m looking forward to learning more information regarding this strange but incredible feature.

Haunted Queen Mary in Danger of Sinking — Ghosts and All