As I mentioned in my previous article on the death of Marilyn Monroe in August 1962, there is a lot of controversy surrounding the interest that elements of the U.S. government had in Marilyn. And, with that in mind, I thought I would demonstrate the extent to which those same elements kept watch on Marilyn. Of course, the files that have been released into the public domain do not provide us a smoking-gun of the "Marilyn was killed because of what she knew of aliens" type. What the records do show, however, is that several agencies were keeping watch on the Hollywood legend. As is stated at the FBI’s website, The Vault: “FBI file references to Monroe were previously released under the Freedom of Information Act in the 1980s, but were reprocessed in 2012 and posted here on January 4, 2013. This reprocessed version includes more information." I began looking into the matter of those 1980s-era FBI files on Marilyn in the 1990s. In terms of their content, they were fascinating. They still are. More on the matter of the FBI and Marilyn in the mid-fifties can be found at the Infinite Marilyn Monroe blog: "Marilyn came under intense FBI scrutiny in 1955, when she began to be frequently seen in the company of Arthur Miller, then under investigation by the House Un-American Activities Committee. After that date her movements were meticulously documented, from the people she saw in New York to her continuing interest in all things Russian." 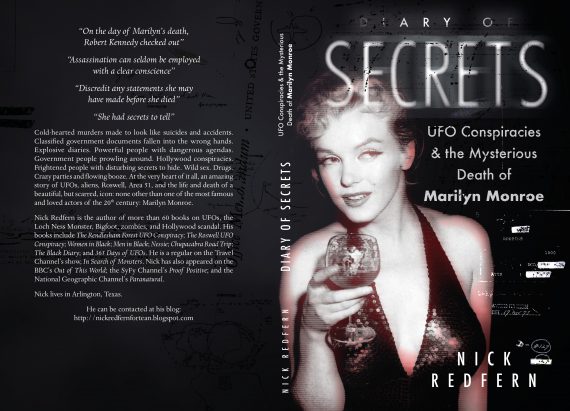 In early March 1962, the FBI added more to its file on Marilyn. This time, the spying was focused on a holiday Marilyn took to Mexico. Hardly a matter of concern, right? The FBI disagreed. The FBI said: “Marilyn Monroe, the movie actress, was recently in Mexico on vacation and while in Mexico associated closely with certain members of the American Communist Group in Mexico (ACGM). Source characterized the ACGM as a loose association of a predominantly social nature of present and/or past members of the Communist Party, USA, and their friends and associates who share a common sympathy for Communism and the Soviet Union.” That was barely the start of it. The FBI was listening and watching intently. Word got back to the FBI that Marilyn and one of the ACGM members were becoming very friendly, if you get what I mean. The document talks of a “mutual infatuation,” and of something that “arose” between the pair. Hoover seethed.

Midway through the summer of 1962, the FBI was exhibiting more and more concern about Marilyn’s growing interest in communism. The Bureau was also becoming worried she was also – allegedly - spending increasing time with JFK. This is made very clear when we scrutinize an FBI document of July 18, 1962. A relevant extract says: "Monroe said she had luncheon at the Peter Lawfords [sic] with President Kennedy just a few days previously. She was very pleased, as she asked the President a lot of socially significant questions concerning the morality of atomic testing and the future of the youth of America. Eunice Murray was in constant attendance upon Monroe. Murray is noncommittal politically but does not care how politically involved with leftist movements other persons with whom she associates may be and encourages Monroe toward ‘political consciousness.’ She says Monroe still reflect the views of Arthur Miller." The FBI went further, describing Marilyn as a "very positively and concisely leftist." It got even more controversial. FBI records say that in the months leading up to her death, Marilyn was being "actively used by the Communist Party."

Only mere days before Marilyn’s life was extinguished, the FBI was still watching, listening and scrutinizing. An August FBI document shows something that, yet again, made a connection between Robert Kennedy and Marilyn: "The Attorney General was contacted and advised of the information we have received alleging he was having an affair with a girl in El Paso. He said he had never been to El Paso, Texas, and there was no basis in fact whatsoever for the allegation. He said he appreciated our informing him of it; that being in public life the gossip mongers just had to talk. He said he was aware there had been several allegations concerning his possibly being involved with Marilyn Monroe. He said he had at least met Marilyn Monroe, since she was a good friend of his sister, Pat Lawford, but these allegations just had a way of growing beyond any semblance of the truth."

Incredibly, Marilyn was still being discussed in FBI headquarters in the 1970s, more than a decade after her death. Norman Mailer Information Concerning was the title of a relevant FBI document. The date: July 23, 1973. Mailer, a journalist and novelist, was very well-known to the FBI. Over the years, the Bureau quietly compiled a 166-pages-long file on the man. It ran from 1962 to 1974. The reason for the spying on Mailer: he was a "leftist." That’s exactly what the FBI called Marilyn. The Observer newspaper reported: "FBI agents closely tracked the grand and mundane aspects of the acclaimed novelist’s life, according to previously confidential government files. Agents questioned his friends, scoured his passport file, thumbed through his best-selling books and circulated his photo among informants. They kept records on his appearances at writers’ conferences, talk shows and peace rallies. They noted the volume of envelopes in his mailbox and jotted down who received his Christmas cards. They posed as his friend, chatted with his father and more than once knocked on his door disguised as deliverymen."

The primary reason why the FBI was concerned by Mailer’s activities in 1973 was quite simple: that was the year in which Mailer’s biography of Marilyn (titled Marilyn and nothing else) was to be published. It promised to be a page-turner of the very controversial type. That’s what it was. Prior to publication, the Bureau flipped when it was found out that Mailer was going to go after both the FBI and the CIA. Mailer talked of "right-wing" personnel in both agencies; personnel who had a giant-sized "motivation" to have Marilyn killed. The reason? "National security," Mailer said. His book was a big problem to the FBI. And the legend surrounding Marilyn continued.