Do you believe in ghosts? Do you believe in legend of Robin Hood? Then it sounds like Roche Abbey near Sherwood Forest in South Yorkshire, England, is a place where you can scratch both itches. Paranormal investigators finally getting to investigate the paranormal after the pandemic lockdown recently reported seeing what appeared to be the ghost of a hooded monk – possibly one of the White Monks or Cistercians who built the Abbey of Roche and may have been singing in the choir when Robin and the Merry Men allegedly attended services there. It’s not the first time a robed and hooded ghost has been seen at Roche Abbey. Is Robin Hood next?

“We’ve been up there taking photos, and the most interesting one was near the first gate house there. We found one of the pictures showed a monk from the chest up, with an orb – a sort of ball of energy. The picture shows the outline of his head in a hood.”

Dean Buckley of the Conisbrough Paranormal Research Association told the Doncaster Free Press about his recent experience at Roche Abbey and shared the ghost picture (see it here, both original and magnified) which looks like the head of a lit match in front of a shadowy outline that could be a hooded figure. If it is, it’s not the first time a hooded apparition has been photographed at Roche Abbey. In 2018, paranormal investigator Kyle Thompson also found one while reviewing photos of an otherwise unsuccessful visit there.

Is Roche Abbey, now in ruins, haunted? It was founded in 1147 and completed in 1172. Cistercian monks came from Newminster Abbey in Northumberland to live and work there. IN its heyday, the Roche Abbey community numbered around 175, with 60 choir monks and the rest lay brothers. The story of Robin Hood worshipping there is based on both legend and proximity to Sherwood Forest, but early records that might have confirmed it were either lost or destroyed. Monks were buried in the nave, but English Heritage reports that the earliest Roche Abbey ghost stories may have been made up by … other monks! 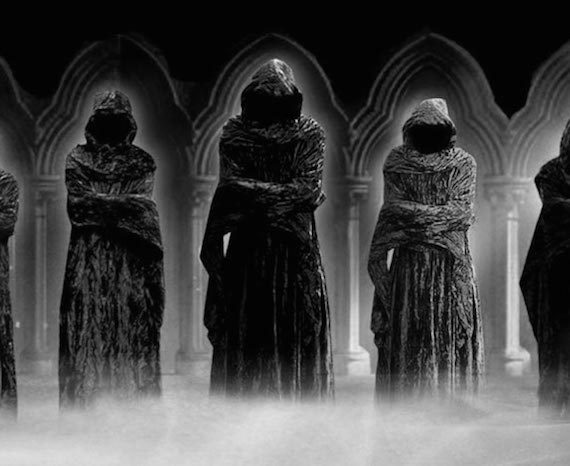 “From the time of the Venerable Bede (d. 735) onwards, monks were prolific recorders of ghost stories. This was in part because they enjoyed the pleasing terror and wonder provided by spooky tales as much as we do today. For instance, Matthew Paris, monk of St Albans Abbey, recounted in his chronicle a tournament of ghostly knights near Roche Abbey (South Yorkshire) in 1236.”

Sadly, Roche Abbey was just one of many brought down under the Dissolution of the Monasteries ordered by Henry VIII in 1538. The contents were confiscated, the buildings destroyed, and the materials pillaged. The ruins were buried until the 1920s when they were excavated, eventually coming under the protection of English Heritage.

"We’re still going through the photographs at the moment – we took up to 1,000. We think it is a monk who would have lived there in the 12th century, when it was still an abbey.”

Dean Buckley told Doncaster Free Press he’s hoping to find more monk ghost photos. After all that has happened there, can anyone blame the monks for sticking around to haunt their beloved abbey?

The Strange Mystery of the Lost Thunderbird Photo