You may be familiar with the name ‘Valery Uvarov’ from his work in pyramid technology and the construction of large-scale experimental pyramids for the purpose of positively influencing human health and the human immune system, and stimulating spiritual growth. You may know him for his work in palaeoscience, palaeotechnology and searching for historical traces of extraterrestrial activities in our past. However, Valery Uvarov is best known as the head of the Department of UFO Research, Palaeosciences and Palaeotechnology of the National Security Academy of Russia – his home base for generating papers, books and theories on ancient civilizations, palaeoscience and ufology. It’s that last subject which has Uvarov back in the news this week.

“Scientists have been studying a mysterious video showing a UFO for several days. She throws an object into the territory of the moon.”

“The increased attention to this video is caused by the fact that a spacecraft drops some rather large object onto the surface of a celestial body. The UFO hovers over an area called the Sea of Cold. Experts have examined on the surface of a good recognizable crater Aristarchus. Its diameter is approximately 40 km. The dimensions of the unidentified aircraft are the same respectively.”

“The only mystery that scientists still cannot figure out is what did deliver the UFO to the territory of the Moon, since the video clearly shows that some kind of cargo is dropped onto the surface of the Earth's satellite. Perhaps this mystery can be solved in the future, when astronauts can explore the area.” 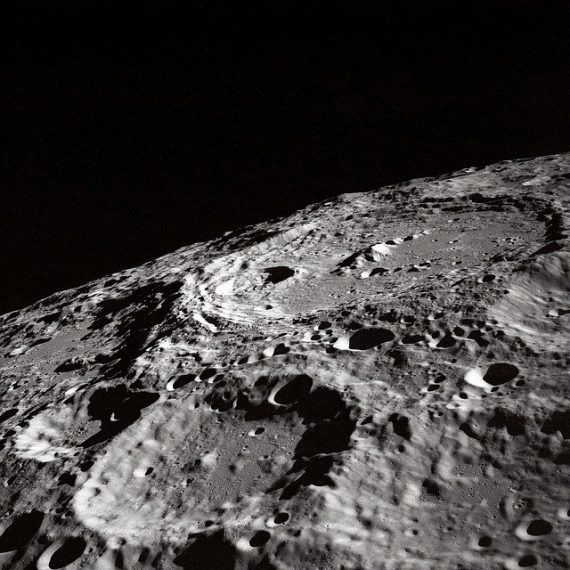 Or if you’re in Russia, you ask Valery Uvarov for an explanation of a recent UFO recorded on the Moon (see the video here) dropping something to the surface. Esoreiter.ru, which reported on the sighting, did just that a few days later and Uvarov had some interesting observations.

“The moon is a unique base from which one can observe and control the processes taking place on the Earth and in the solar system. This object can be called a station from which tracking is carried out.”

Uvarov believes the Moon is an extraterrestrial base – not an unusual belief. However, his theories on the origin of the Moon itself may call his credibility into question with some people.

“The moon appeared relatively recently. This happened about 13 thousand years ago. It is considered a natural satellite of the Earth, but in all the ancient texts that have survived, we are talking about the fact that it arose after a great catastrophe in the solar system. Its appearance was accompanied by a powerful flood on our planet.”

OK, believers in a great flood might buy that, although his timing may be off. What happened 13,000 years ago to create the Moon?

“The moon is the largest surviving fragment of the planet Tiamat that once existed in the solar system. She was big enough. In order to imagine its real mass, in no case should one take into account only the asteroid belt [between the orbits of Mars and Jupiter]. It is necessary to sum them all, add the weight of the Moon and the debris that revolve in three librational points of Jupiter's orbit.” (Google translation)

OK, that sounds somewhat plausible – except for the 13,000-years-ago part. Unfortunately, the article in Esoreiter.ru is short and contains only those excerpts, not the full text or any context. It also doesn’t say anything about who the ETs are flying UFOs from their base on the Moon. For that, we turn to a 2017 interview with Sputnik.news.

“However, there is another planet in the solar system populated by those who once lived on Mars and Phaeton (Nibiru). Those who survived the disaster have gone to a planet behind the Sun, which is mentioned in ancient Egyptian and Sumerian texts. If some large planetoid hits the Earth, the planet that is in the same orbit but behind the Sun, it will most likely begin to lose its orbit.”

The “disaster” appears to be the same one 13,000 years ago that he claims formed the Moon. These ETs are “humanoid” in form and communicate via telepathy – an ability humans had until the “disaster.” All other “developed extraterrestrial civilizations” have it – allowing them to exchange instant information. Uvarov ties the “disaster” to an asteroid that hit Earth which changed Earth's orbit, pushing the year from 360 days to 365 days. According to his theory, this would have dire consequences for the alien planet behind the Sun if it happened again. Fortunately, there’s a solution in Siberia.

“Our planetary neighbors have built a defense complex against meteorites and asteroids to defend, not so much us, but the planet and themselves. Almost every day the Earth is attacked by meteorites, some of which carry dangerous bacteria that could have dire consequences for the planet as well as for its neighbors. So it is easier to destroy the meteorite above the Earth. By the way, this plant destroyed the Tunguska meteorite on June 30, 1908 and also dropped the meteorite on Chelyabinsk on February 15, 2013.”

By “dropped,” Uvarov seems to mean shot down. You may ask, “If these aliens care so much about our safety, how come so many asteroids sneak through their Siberian defense system?” Good question! The system is autonomous and therein lies the problem.

“This is why it has malfunctions and sometimes it shoots empty, as they say. The operation of the plant is particularly supported by our neighbors on the planet as long as it is possible. Local people from this faraway area in Siberia tell of people with super modern equipment. For the first time these people were seen after a year of the Tunguska explosion and an expedition from the National Internal Affairs Committee was sent there. It was discovered that those strange people, who avoided contact with the local population, had no relationship with our scientists or military.”

Did you follow all of that? Uvalov claims he can observe the system and it’s working so well now that “sometimes the plant shoots for hours without stopping. This is a testament to how high the meteorite danger is.”

What were we talking about? Oh yeah – the UFO on the Moon. Perhaps the ETs are building an asteroid deflector in anticipation of humans establishing a colony on the Moon. That’s not Uvarov’ theory but it’s as plausible as any of his others.

Maybe he should stick to pyramids.

A Mysterious Cursed and Haunted Penthouse Building in New York