The Bizarre Case of the Carmel Mystery Crawler

There are at times reports from the world of the weird that really serve to baffle and confuse. There are sometimes those reports that leave us wondering just what could possibly going on, not really fitting into anything we know and unclassifiable, making us wonder just what it is we could possibly be looking at. Cases like this pop up throughout the landscape of the paranormal and cryptozoology, and one of these must certainly be the cases of mysterious armless pale creatures that walk about on two legs and leave us scratching our heads as to just what could possibly going on.

On December 12, 2014, a bizarre series of events would play out along a dark, lonely stretch of rural road in the area of Carmel, in Highland County, Ohio, in the United States. On this evening, a 60-year-old former marine and his wife were driving along lost to their own thoughts when they began cresting a hill and had something from out of a surreal nightmare materialize from out of the gloom. According to the unnamed male witness, the bizarre entity he saw looked armless, with a thin torso and two muscular legs that propelled it along, the whole of it covered with grey skin. The sighting was so fleeting that by the time the husband shouted out to his wife the thing had already disappeared into the wilderness, so she did not actually witness it. She would report the sighting to the Ohio division of Mutual UFO Network (MUFON) and say of it:

After turning on Carmel Road, which leads to our road, we went around the curve by the Carmel church and then up a small incline and approximately 10 feet over the incline and in front of our truck, the ‘alien’ ran across the road and into the woods. My husband saw it. He is a skeptic – almost 60 years old – and a proud Marine. He wouldn’t have admitted to seeing it if he hadn’t been in shock. I had him draw it for me when we got to the house. He says it was asphalt gray (our asphalt is gray) and about 7-feet tall, no arms that he could see, but muscular in the legs area; no jawline, and its legs were bent backward and it leaned forward as it ran. 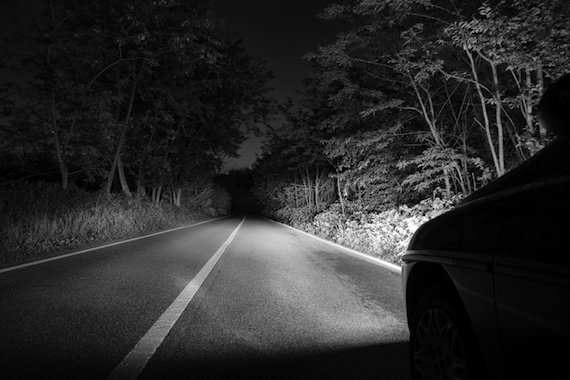 Adding to the oddness of this report, they would also claim that there was a “perfect circle that stays fresh green, no matter what weather” in the front yard of their nearby home, although it is not clear what connection this might have to their weird encounter. As soon as the report got out into the wild it generated a lot of discussion, with theories on what it could be ranging from far-out ideas like aliens or interdimensional interlopers, to a deer walking on its hind legs or a misidentified large bird called a heron, or even an escaped ostrich. One wildlife biologist who looked at the case explained of what he believed it to be, saying:

While the description of the thing does sound like a hideous creature from the game Silent Hill, I propose a very normal explanation.  Assuming that the witness actually saw something, and that the description matches what the witness saw, my educated guess is that the witness saw a very real animal acting in a way that, while not peculiar, isn’t something most people commonly observe. It was a white-tailed deer walking on its rear legs. Deer will rear up and even walk on two legs for a few reasons, mostly relating to male competition for reaching food. They don’t normally walk that far, but there’s no reason to assume a male couldn’t at least appear to have walked upright as far as the witness claims.

Whatever the Carmel Monster was, amazingly, there have been other reports of similar entities that bear at least a passing resemblance to whatever this thing was, in that they are reported as merely a pair of legs with an armless torso, and which have been come to known as “nightcrawlers,” “walking pants” or “walking sticks.” One is the sighting of a commenter named Frank DalOra, on the site Beyond the Paranormal, who says of his own encounter:

I saw one for these almost ten years ago in Bronxville New York. At exactly 2:30 in the morning I was hanging in front if my house with two friends and seemed liked someone called 911 because a brigade of trucks and cars came flying down my dead-end street and in the blink of an eye the brigade had all somehow already turned around and driving the opposite way. As if the time in between never happened. Then this thing running backwards was sprinting across the street and ran under a light as we saw this translucent grayish skinny thing with no arms and legs bent backwards. And it vanished. But the whole time it was somehow communicating with me telepathically telling me that it wasn’t going to hurt me and making me feel safe. I have one other story as well.

Probably one of the most well-known cases of these odd entities is that of what have come to be called the Fresno Nightcrawlers. The first account of these truly bizarre and unidentifiable creatures surfaced in the 1990s, when a video came forward showing something very strange indeed lurking about in the area of Fresno, California. There was a family who were concerned about trespassers on their property, as their dogs had begun to bark out into the darkness nearly every night, and this prompted them to install a security camera outside by their garage, facing the front lawn. That next morning after they set up the camera they were in for quite a shock, as there in the video was a pair of pale beings a few feet in height, with no discernible arms and two long, spindly, almost stilt-like legs that appear to bend backwards. Interestingly, there seems to be some sort of fabric flapping around the legs, drawing many comparisons to a pair of disembodied walking pants. In the footage the creatures smoothly and fluidly move across the front lawn and out of view, and that’s that.

The quality of the footage is sadly low, making it nearly impossible to discern any real details, but the general shape and their odd way of moving were creepy enough to have the family contact the police. Before long the media got a hold of the footage and the “Fresno Nightcrawlers” became a hot topic. Although thought by many to be a hoax, others say that this footage has captured something truly otherworldly, and the footage was subjected to a detailed analysis on the SyFy Channel show Fact or Faked, which showed that the footage seemed to be genuine, and they were unable to reproduce the same results by intentionally faking the video.

Following on the heels of this video was another, this time taken over in California’s Yosemite National Park in March of 2011. In this case surveillance cameras had been set up by park officials for the purpose of identifying some intruders who had been vandalizing an area of the park, and again they seemed to have caught on tape something anything but human. Again there is a pair of spindly white entities loping across the frame on a hillside, one seemingly much smaller that the other, and both with what appears to be some sort of webbing connected from the knees to the upper body. Although they appear to be very similar, it is unknown if the Fresno creatures and the ones from Yosemite are related or not, and there have been theories ranging from that this was all a hoax, to that they are Native spirits from lore, ghosts, or even aliens. No one really knows. We are left to wonder what could possibly going on here. Is this aliens, interdimensional phenomena, or something much stranger? It remains weird and unknown.