In 1855, renovation work was being carried out on Bishop Audley's Chantry, a cathedral in England, when something very strange was found languishing away in the darkness beneath the floor. It was a sheet of vellum, or calf skin, measuring about five feet long and four and a half feet wide, and although faded and damaged, when it was examined and restored it was found to be a medieval world map of some sort, one of the largest ever seen. But this was no ordinary map, as upon its sprawling face were many strange features and wonders that have inspired much discussion to this day and has made what has come to be known as the Hereford Mappa Mundi one of the weirdest and most mysterious maps ever found, as well as one of the most significant historical maps in the world. 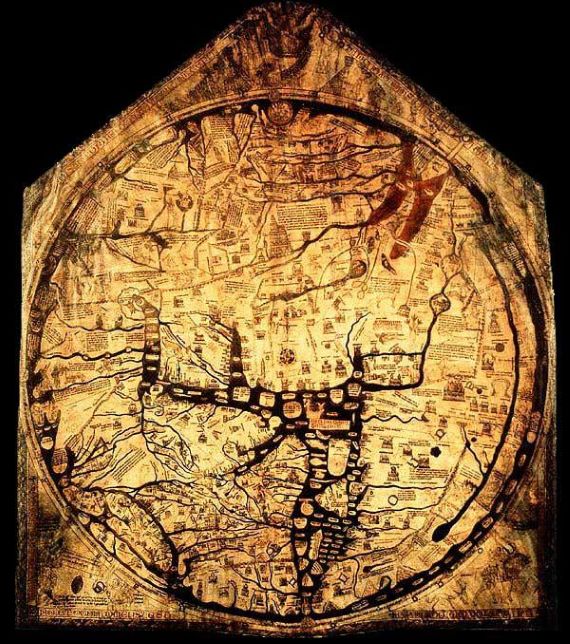 The Mappa Mundi, which is simply Latin for “Map of the World,” is thought to have been made in around 1285, although the exact date, as well as the authorship is questioned and debated. It is known that the whole map was likely created by more than a single author, and what a map it is. Meticulously and intricately inked with black, red, gold, blue, and green, the colorful map is filled with over 500 elaborate illustrations of all manner of things including scenes from mythology and human history, strange tribes in distant lands, towns, landmarks, geographical features, biblical events and places including the location of the Garden of Eden, exotic plants and animals, and a menagerie of bizarre monsters and creatures such as dragons and other less identifiable beasts, all of it rendered in intricate detail. The world is depicted as circular, with the city of Jerusalem in the center, and the map is very odd in that in some respects it is very accurate, yet in others it is incredibly wrong and fantastical. For instance, Europe and Africa are transposed and East is depicted as being at the top of the map, South is on the right, West is at the bottom with North on the left, and there are many geographical features in the wrong spot or depicted erroneously, as well as other anomalies, with much of it oddly not corresponding to the geographical knowledge of the 13th century. Whether this was artistic license taken by the artist of the map or not is unknown, but it is not the end of the map’s many oddities.

One of the most oddly striking features of the map is that it shows the locations of all manner of mythical and Biblical lost lands and artifacts. Among the many such locations on the map are Paradise, which is shown to be where Japan is, the Garden of Eden, Noah’s Ark, the Cretan Labyrinth, the Golden Fleece, the Columns of Hercules, the Tower of Babel, the mythical island of St Brendan's Isle, and the land of Gog and Magog, among many others. The bestiary on display across the map is also impressive and strange. Here one can find known animals mixed in with all manner of fantastical and weird monsters, with crocodiles, camels or elephants depicted right alongside dragons, griffins, unicorns, cave-dwelling Troglodytes, and tribes of headless men called the Blemmye, among others. The seas of the map are populated by fish and whales, as well as sea serpents and mysterious leviathans, and the whole of the map is a sumptuous feast of weirdness. 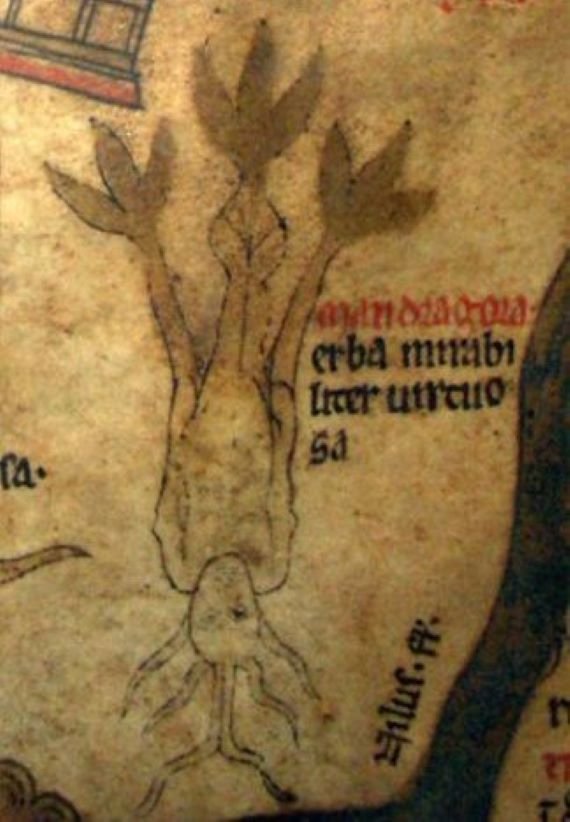 It is quite obvious that the Hereford Mappa Mundi was never intended to be an accurate map to be used for navigation, but was rather a work of art. The exact person who made the map is still debated. Although the map itself is attributed to a “Richard of Haldingham and Lafford,” but this is debated, as the map seems to have been created by more than one person, probably passed on to several different people who worked on it, likely copying portions from other maps available at the time. Whoever it was who made it, they managed to craft the largest known medieval map still in existence, as well as one of the more mysterious and significant, with Christopher de Hamel, a leading authority on medieval manuscripts, saying of it:

The Mappa Mundi is without parallel the most important and most celebrated medieval map in any form, the most remarkable illustrated English manuscript of any kind, and certainly the greatest extant thirteenth-century pictorial manuscript.

Today the Hereford Mappa Mundi is kept in a glass case at the Hereford Cathedral, which is also home to the Chained Library, which holds 229 medieval manuscripts and is considered to be another great mediaeval treasure in and of itself. It remains a curious historical oddity and mystery, which has served to hold its place upon the landscape of weird oddities from history.

An Adult Sauropod, an Unknown Juvenile, and a Barely-Known Ichthyosaur Fossils Found