In 1928 a curious discovery was made at Nevada's Berlin-Ichthyosaur State Park, located just about 350 miles northwest of Las Vegas. The area was once a seafloor during the Triassic period, 250 million to 200 million years ago, and a treasure trove of fossils of a type of school bus-sized aquatic reptile called the ichthyosaurus, but on this occasion there were found the circular vertebral discs, or backbones of perhaps nine ichthyosaurs, each from an animal measuring between 45 and 50 feet long and around 220 million years old, which seemed to have been arranged in linear and circular patterns for reasons no one could comprehend. Many theories were proposed over the years as to how these creatures had died, ranging from that they had beached themselves in shallow water to that they had encountered a lethal algae bloom, but none of these could explain why the remains had ended up in these seemingly intelligently constructed patterns, and for years scientists just sort of shrugged their shoulders at the anomaly. Then, in 2011 Mark McMenamin, a paleontologist at Mount Holyoke College in South Hadley, Massachusetts, came up with a bizarre theory for the mysterious bone patterns that contained less algae blooms and beachings, and 100% more sentient Cthulhu-like underwater beasts.

When looking at the patterns of bones, McMenamin found that none of the theories posited really explained these seemingly orderly arrays of geometric shapes, and he did not believe that they would have ended up that way through natural processes such as currents or mud compaction, as a study of the mud and silt at the bottom showed no signs of currents strong enough to do that and no significant compaction. The layout of the bones seemed to be so balanced and precise that he saw virtually zero chance that they had just happened to fall into these patterns through natural means, saying “You always go from a more ordered to a less ordered state, not the other way around.” What he came to suspect was that these ichthyosaurs were killed by a very large octopus or squid he calls a “Kraken,” after which their bones had been intentionally placed there in these patterns by the beast for reasons that can only be guessed at. He has said of this in an interview with NPR:

The site appears to have been deposited in relatively deep water. And so what I believe happened is that there was a large cephalopod of some sort, possibly belonging to the vampire squid lineage, that would grab onto these ichthyosaurs as they were diving into deeper water for their prey, would immobilize them in some way, kill them and then carry them down to the sea floor and deposit them on a midden. There seems to be evidence that they did that (arranged the bones), the bones have been meddled with, shall we say, and some of them seem to be organized into almost geometric patterns. Now, you have to keep in mind that there are insufficient currents at this depth to arrange the bones, so current action couldn't do it. There's enough mud in the environment still to show that there were no strong currents. And in any case, the specimen U array is in a hydrodynamically unstable position. If there were currents, it wouldn't end up looking like that.

So assuming this were true and a giant cephalopod killed these giant reptiles to then place their bones into these patterns, then why would it do this? McMenamin has some ideas, one being that perhaps it was some sort of rote instinct that compelled the creature to do this, but he doesn’t really seem to think so. His most outlandish claim is that this titanic cephalopod was using its incredible intelligence and cognitive abilities to actually willfully arrange the bones as a sort of self-portrait, placing the bones in double-line patterns to purposely resemble the pattern of sucker discs on the predator's own tentacles. The idea that a giant Kraken was going around killing ichthyosaurs and arranging their bones into a sort of self-portrait understandably raised quite a lot of eyebrows among his peers, but he claims he has strong evidence pointing towards his hypothesis.

The first major piece of evidence to back him up was the discovery of a second example of such oddly arranged ichthyosaur bones. The bones in question came to his attention when he was shown a picture of an ichthyosaur fossil formerly on display at the University of Nevada, Las Vegas Museum of Natural History. The bones had been laid out in the museum exactly the way they had been found in the field, and McMenamin noticed that around the ichthyosaur were scattered vertebrae that had been separated from the main skeleton to form the same sort of pattern that could be seen in the original ichthyosaur remains. There was also found to be damage on the ribcage consistent with the attack of a very large predator. He would say of this revelation, “When I saw that photograph, basically my eyeballs popped out.”

It was groundbreaking enough that it convinced him to make an expedition to Berlin-Ichthyosaur State Park to look for any additional evidence they could find, and amazingly they did stumble across something rather unusual. As they combed through the area looking for further fossil evidence, they came across a strange, pointed object that they could not identify at the time, but which McMenamin would later speculate to have been the beak of an absurdly giant squid based on a comparison with a beak from a Humboldt squid, only this beak would have belonged to a truly massive specimen. If this is true, then it proves that there were giant cephalopods in the same area where the strange bones had been found, and he would excitedly say of the discovery, “This was extremely good luck. This was finding the needle in the haystack, really.”

The problem is, the mysterious fossil can’t be proven to have been the beak of a giant squid, and other elements of McMenamin’s theory have been picked apart by skeptics. It has been pointed out that there is not enough known about the currents of the era to rule that explanation out, and that the vertebral columns of the ichthyosaurs could have simply fallen like rows of dominos as their flesh and ligaments were consumed by scavengers and they fell victim to decomposition, making them merely appear to have been laid out in a line. After this, currents might have further warped their arrangement to make it seem as if they had been intelligently placed. Ryosuke Motani, a paleontologist at the University of California, Davis, has explained of this:

It's fun to think about (McMenamin’s idea), but I think it's very implausible. These bones are disc-shaped, so when they're disarticulated after rotting, they lay flat on the seafloor and can get gathered up and packed together by ocean currents. This particular specimen [that McMenamin focused on] has two rows. But I've seen others that have three rows. ... It's natural that the bones get arranged like that.

One very vocal critic of McMenamin’s hypothesis is Eric Scott, curator of paleontology at the San Bernardino County Museum, who has read the paper on it and said of it:

Other than the paper itself, other than the presentation itself, there isn't any hard evidence supporting the existence of one of these krakens. What has happened, seemingly, is that the authors see what they interpret to be a pattern in the ichthyosaur remains, and they are proposing an explanation that in their view might explain what they're seeing. And they're basing it on comparison with things like modern octopuses, which are known to create what are known as midden piles, but there's a bit of an extrapolation. Number one, octopuses don't create midden piles with giant fish like ichthyosaurs, so you'd have to be talking about a large animal. And number two, octopi don't create midden piles that show patterns.

And so these authors have taken it further and argue not only was this a giant cephalopod, but it had rudimentary intelligence, as well, and that's an absolutely extraordinary claim. And generally in science, if you have an extraordinary claim of that nature, you have to have extraordinary evidence to back it up. You can look at things and see what appears to be design. I can see shapes in clouds or rock formations that make me think of birds or turtles or spaceships or what have you. That doesn't mean that they're anything but clouds or anything but rock formations. And so the appearance of design isn't enough to argue that it has to be design. You actually have to then take it the next step and rule out other alternatives. And from the evidence that's been presented, that's now what happened here. 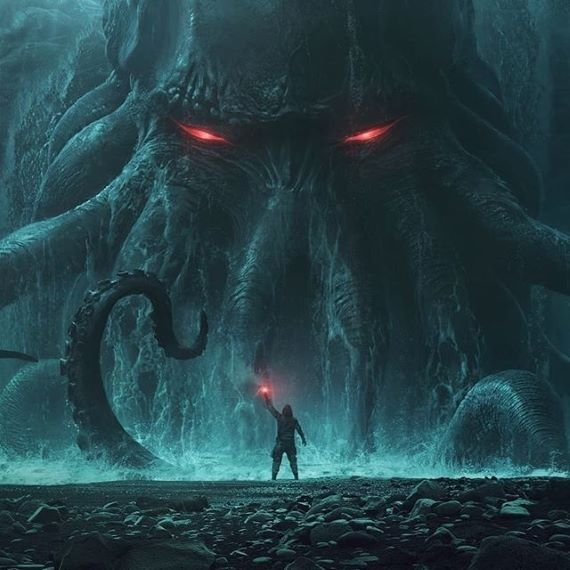 McMenamin does not agree with these skeptical assessments, pointing out that very large cephalopods do exist and that they are known to kill very large prey, as well as to display spooky levels of intelligence. He also points out that the array of bones that were found cannot be simply falling spinal columns falling apart, because the patterns are composed of not only vertebrae, but other bones as well, all pieced together out of order and fit together like a jigsaw puzzle. He insists that his ideas are not so farfetched, and that they are supported by evidence, saying:

So what was going on here? Was this just a random array of bones formed by currents and rational causes? Or is it the doing of some super intelligent, possibly sentient gigantic cephalopod? The case is very bizarre in many ways, and no one seems to be able to agree on any one idea as to what it all means. Is this proof of some murderous and artistic squid-like creature? Has Cthulhu been up to some antics back in the day? Or is this just reading too much into random patterns of bones? No one really knows, and it may remain a mystery for some time to come.

Billion-Year-Old Fossil is a “Missing Link” in Animal Evolution