“Feel-good monster story” sounds like an oxymoron and for good reason – there just aren’t many instances of monsters performing good deeds or cryptids saving lives … especially ones whose appearance generated headlines like “Monster Terrifies 6 Kids, a Mom and a Dog,” spawned books and movies and ended up as part of the Project Blue Book investigation. If you haven’t figured out the monster from all of those not-so-subtle hints, today’s caring creature story concerns the Flatwoods Monster, and its good deed involves saving a company in West Virginia from shutting down for good due to the pandemic.

“People are maybe getting into what makes the state unique and our folklore. Other than that, it’s still somewhat of a mystery.”

Designer and illustrator Liz Pavlovic could be referring to the Flatwoods Monster, but she’s actually describing her surprise at how well the handblown glass Flatwoods Monster figurine she designed for the Blenko Glass Company is selling. (See it here.) At 16.5 inches tall, it’s quite a bit smaller than the estimated 10-foot-tall being seen in its only appearance on Sept. 12, 1952, in Flatwoods, West Virginia, to mom Kathleen May, her sons, their friends and a local man after a UFO sighting. They claimed it was a "man-like figure with a round, red face surrounded by a pointed, hood-like shape" with pulsating, glowing eyes, claw-like hands and a nauseating odor. There were no other witnesses and skeptics said the UFO was a meteor, the monster was a big owl with a bigger shadow, and the eyes were aircraft warning beacons. That didn’t stop believers from believing and the incident inspired an annual festival, books, video games and documentaries. 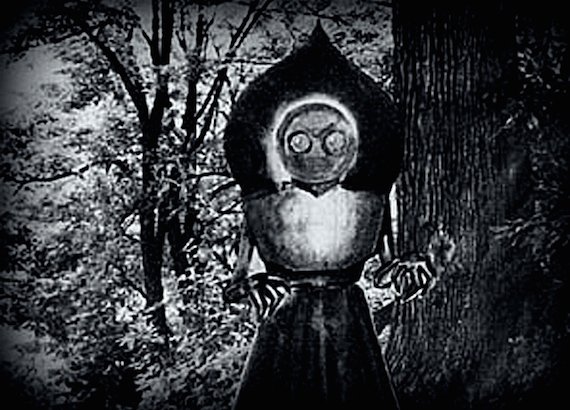 And a glass statue.

“The two-piece, 16.5-inch tall figurine, in the company’s signature clover green and ruby red colors, was the first in a planned series of decorative cryptid sculptures. The roughly 800 monsters in the limited-run series were priced at $129 — more expensive than most of Blenko’s products, including its water bottles ($53), small bowls ($33) and suncatchers ($16-18). Yet the monsters turned out to be hugely popular among millennials, helping to propel the company to its most profitable year in two decades.”

According to The Washington Post, Blenko was founded in 1893 as a flat glass maker and produced stained glass for New York City’s St. Patrick’s Cathedral and the Space Window at Washington National Cathedral in Washington. It has managed to outlast its local competition but the pandemic caused serious problems for the company whose target market is women age 30-50. Blenko had to shut down its furnaces and furloughed all 48 employees. Fortunately, it had recently begun selling its products online and that’s where the Flatwoods Monster saved the company.

Bryson Cutler, the company’s marketing and accounting lead, said the Flatwoods MOnster figurine was not Blenko’s usual “grandmother’s glass” and instead hit a “home run” with a younger customer base. That not only kept money coming in until they could get a loan and the pandemic subsided enough to reopen, but it convinced Blenko management to create an new monster line of glass figurines, including West Virginia’s other famous monster – Mothman. Coincidentally, Blenko made the red glass eyes for the famous Mothman statue in Point Pleasant.

For more into on Blenko and its products, visit their website. For more on the creations of Liz Pavlovic, visit her website. To thank the Flatwoods Monster for preforming such a good deed, visit Flatwoods, the festival and the museum. If you see it, your shocked face could be on a Blenko figurine.