The Mysterious Case of a Vanishing Cultist Family

At first glance, the man once known as Simon Kadwell might have seemed to have a relatively normal life. He lived in a modest home in the small town of Nannup, Australia, along with his girlfriend Chantelle McDougall, their 6-year-old daughter Leela, and their friend Tony Popic, who lived in a caravan parked outside the house. On first appearances, the family seemed happy, and Kadwell was described as friendly and charming, but there were strange things going on behind their façade of normalcy. This would lead down a dark road of weird cultists and a mysterious vanishing of a whole family that would never be solved.

The family’s weirdness would start to show not long after they moved onto the property in 2004, when they gradually proved to be rather odd. Kadwell would sleep all day and stay up all night, and Popic was known for giving people the creeps. Over the years, neighbors say that Kadwell’s behavior got more and more bizarre. He would often talk about aliens and UFOs, and began to rant about “electromagnetic waves” that he believed were being beamed at his property by nefarious parties, which he thought was part of a conspiracy to kill him and his family. He would claim that people were out to get him, and one neighbor explains of this:

Simon was paranoid about electromagnetic fields. He was always ranting and raving about them, up to the point where he was breaking out in hives and his face looked as if it was about to burst, it was so red. This went on for four months. He began burying a heap of magnets around the place because he believed they diverted these rays away from him. I went up there once and he was yelling at Tony (Popic), who was digging away in the backyard, trying to find the magnets. The second last time I saw him he was covered in hives. He said they were killing him and his daughter, and he had gone to the doctor to get some sort of medication. He and Tony were off the planet. 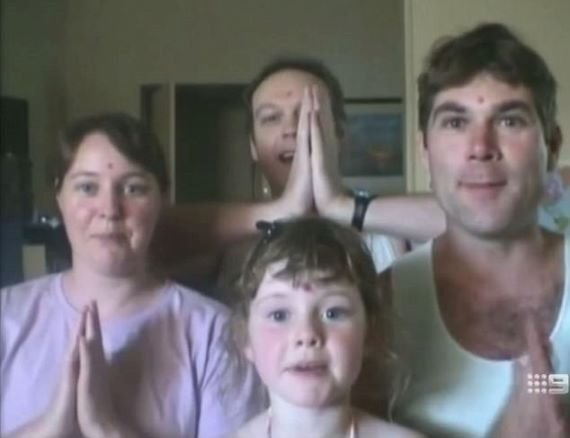 McDougall seemed to be comparatively normal, but they were gathering a reputation as very eccentric weirdos, and then things would get even stranger when on July 13, 2007 all four of them drove off, and apparently kept on driving off the face of the earth. When they did not return for several days and friends and family reported them as missing, police would find that they had left all their wallets and credit cards behind, dirty dishes were in the sink, any everything was in perfect condition as if they would come home at any moment. The only possible clue as to where they had gone was a note that merely said “Gone to Brazil.” Police were quickly able to find that both Kadwell and McDougall had been seen selling their cars the day of the disappearance and that they had sold their dogs as well. They also found witnesses who claimed that Kadwell had told them he was taking the family to Brazil to join a remote and reclusive spiritual community in a small town there. As all of this was happening, the family’s bank accounts remained untouched and there was no sign of them anywhere.

As police dug even further, they would also begin to uncover some rather weird and sinister things that would prove that something was very off about the vanished Kadwell and his companions. It would turn out that Kadwell was in fact actually the leader of a doomsday cult called the Truth Fellowship, which believed that the world would come to an end after the past 75,000-year cycle and that souls who followed their teachings would ascend to a higher consciousness. Kadwell had written a whole book on this called Servers of the Divine Plan, which his followers treated as scripture and followed to the letter, and they mostly gathered online in a forum they called “The Gateway.” McDougall’s family and friends would also claim that she had been brainwashed by Kadwell, and was completely subservient to him. In addition to this, it was found that Simon Kadwell wasn’t even his real name, and that he had stolen that identity from a colleague in his native England. His real name was Gary Feltham, and he had travelled widely through the US and India promoting himself as a mystic and shaman before finding his way to Australia and starting his cult.

It was first thought that they had simply fled the country to go to Brazil as they had said, but immigration authorities had no record of the group leaving the country. This, plus Kadwell’s shady past and position as a cult leader soon led police to suspect that he might have done something terrible to them. This was bolstered when one of the online cult members mentioned that Kadwell had spoken of carrying out a suicide pact, but there was no real evidence for any of this. Police would later learn that a woman Kadwell had dated in 1993, an Australian woman named Deborah, had also gone missing after taking an excursion to India with him, but there was no concrete evidence to link the two or point to any foul play. Another idea was that they might have gone off the grid, and were living in hiding somewhere in Australia under aliases. After all, Kadwell had assumed a fake identity before, so it would have been relatively easy to do it again. However, at the time there were no solid leads to point to any one of these various theories.

The case would go cold, with only sporadic reports of alleged sightings of the group all over the place that led nowhere, until in 2013 there was a promising lead. Investigators would discover that a man using Popic’s identification had visited Perth and stayed at Northbridge hostel Underground Backpackers on July 15, 2007, after having travelled by train from Bunbury to Perth earlier that afternoon. The same man would then take several bus and train routes to Northcliffe, a forest town 350km south of Perth, and Kalgoorlie, about 600km east of Perth, before disappearing again. It would appear that he had been alone on this particular trip, leading police to think he had perhaps done something with the others and was on the run, but no further information could be found and the lead dried up. And this has been pretty much where the case stands today, this group of four cultists just vanished into thin air, with no clue as to where they went. One of the investigators on the case, a Det-Sen-Sgt Greg Balfour, has said of it:

It’s truly a mystery. It’s such a bizarre story and we have as little an idea of their whereabouts today as we did in 2007 when they disappeared. There’s no evidence to suggest they are dead, just as there’s no evidence to suggest they are alive. We know that Tony was very protective of Chantelle and Leela but we also know they were obedient, submissive to Kadwell. He had a very persuasive way of talking and I think if he had suggested something they would have gone along with it. Remember, he successfully isolated Chantelle and Leela from their families so it’s perfectly possible they are alive, living off the grid somewhere in Australia or overseas. There are other ways to leave the country, they could have left by boat, or on a yacht. There are so many possibilities, so many uncertainties. Even the facts raise more questions than answers.

What happened to these people? Where did they go on that fateful day? Did this have anything to do with the cult, or was it something else? Did they go off to live a new life somewhere else, perhaps start some weird commune somewhere? Were they murdered, either by "Kadwell," Popic, or someone else? The case is still open but remains totally unresolved, this group of people just evaporating. All we know for sure is that they have never reappeared, nor has there been any further clues or leads, and it remains one of Australia's weirder unsolved vanishings.