Some mysterious people in history have managed to create quite a lot of mysteries in their wake, often of a very supernatural kind. One of these was the woman born as Isabella Tomasi, who joined the Benedictine convent of Palma di Montechiaro, on the Sicilian island of St. Paul, Italy in 1645 at the age of just 15, taking on her new name of Sister Maria Crocifissa della Concezione. Not much is known about her life before this, but there are records showing that she came into the convent a troubled child who feared that she was cursed with an impure heart and wished to enter the convent to become a better person through the Benedictine lifestyle of love, peace and work. At first it seemed to work, and Sister Maria was a model nun who seemed to have come to peace with her inner demons, but things would begin to change as she seemed to come under attack by very literal ones. Here we begin a very weird case of demonic possession and a letter supposedly written by the Devil himself.

It apparently began with sudden outbursts during mass, in which Sister Maria would blurt out obscenities to shock all present, yet later not remember having done so, and she would also sometimes faint at the altar for no apparent reason. This graduated to sudden episodes in which she would convulse and snarl at those around her, as well as instances in which she was repelled or thrown into a rage by the sight of religious imagery. Sister Maria began to believe that demons or even the Devil himself were trying to corrupt her, lead her into the dark, and use her as a conduit, which she would rant about to anyone who would listen. Other nuns began to avoid her and she would spend more and more time locked away in her room for her own safety and that of those around her. On Aug. 11, 1676, Sister Maria had spent the evening in her own room away from the other nuns as usual, when there was heard intense screaming from her room. This was not completely uncommon for the troubled nun, but this time seemed different, more desperate, and when the others ran to see what had happened they were in for a bizarre sight. 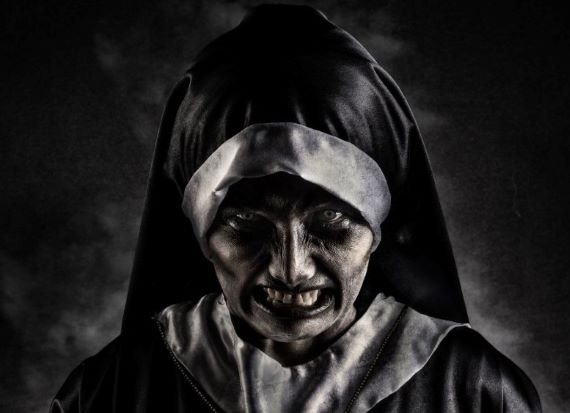 In the room, they found Sister Maria sprawled out on the floor with ink all over her and the room. In one of her hands was clutched a letter, which when opened showed a scrawl of cryptic and incomprehensible glyphs, symbols and jumbled, archaic letters that none of the nuns could understand. When the nuns asked her what the letter meant, Sister Maria replied that she herself did not know what it said, but that the Devil had appeared in her room to force her to write it. She told them that he had written the letter through her, but that she could not remember actually writing it and that she did not know what meaning it held, pleading and begging the other nuns to take it and destroy it. The nuns truly believed that the mysterious letter was the handiwork of Satan, written through this poor woman under a spell of possession. The letter was taken away, but they did not destroy it, instead putting it on display in order to catch the attention of anyone who could decipher it.

Shortly after the incident, Abbess Maria Serafica wrote an account of Sister Maria’s plight, deeming her to be under attack by “innumerable evil spirits” and the letter beyond the comprehension of mere mortals. Indeed, church scholars and experts in ancient languages were unable to decode what the letter said. It just seemed to be complete gibberish, a mishmash of pieces of several ancient languages and less identifiable letters and glyphs that formed a morass of nonsense. It would remain this way for centuries, and Sister Maria’s letter from the Devil would become a sinister and puzzling unsolved mystery that taunted those who would study it. It would not be until 2017 that a modern scientific team took a serious crack at it, finally managing to decode much of the mysterious letter. A team of scientists from Ludum science museum in Sicily started by getting their hands on an intelligence-grade code-breaking software obtained from the dark web, after which they input several languages they figured Sister Maria might have been familiar with and let the program go to work. They would find that the letter was composed of bits and pieces of several ancient languages including Greek, Latin, Runic and Arabic, all mixed into a code of sorts, and that it was far more complete than they had expected. Ludum Director Daniele Abate has said of the process:

We heard about the software, which we believe is used by intelligence services for code-breaking. We primed the software with ancient Greek, Arabic, the Runic alphabet and Latin to unscramble some of the letters and show that it really is devilish. The letter appeared as if it was written in shorthand. We speculated that Sister Maria created a new vocabulary using ancient alphabets that she may have known. We analyzed how the syllables and graphisms [or thoughts depicted as symbols] repeated in the letter in order to locate vowels, and we ended up with a refined decryption algorithm. We thought we could just come out with a few words making sense. But the nun had a good command of languages, the message was more complete than expected.

So what did the letter say, you ask? While the scientists did manage to translate most of it, there are still portions that are incomprehensible, and much of what was decoded is still mostly rambling and doesn’t make much sense. It mentions that the Holy Trinity are "dead weights," and says “God thinks he can free mortals ... The system works for no one…Perhaps now, Styx is certain,” referencing the River Styx, which was said to separate the land of the living from that of the dead in Greek and Roman mythology. The letter even makes the claim that God was invented by man. It would have all been very blasphemous stuff in Sister Maria’s time, to be sure. So why did she write it in the first place? The team thinks that this was perhaps just a very troubled young woman, perhaps afflicted with schizophrenia, who used her knowledge of different languages and alphabets to construct her own vocabulary and code to write the letter, Abate has said:

I personally believe that the nun had a good command of languages, which allowed her to invent the code. And Sister Maria may have suffered from a condition like schizophrenia, which made her imagine dialogues with the Devil.

This still doesn’t really explain why she did it in the first place, especially since she would have known no one would be able to read it. What was the point? Did she just do it as a hoax, or was expressing her dissatisfaction of the church through this letter that only she could understand? Was it just the ranting of a poor young woman losing her mind? Or was it perhaps really the Devil who wrote it just as she has said? Who knows? In the end there are still mysteries surrounding the letter, with parts of it still undecipherable, and considering that not much is known about Sister Maria or what happened to her after this incident, the answers we seek will likely remain lost to the mists of time.