The Strange Case of the Persian Princess Mummy

In October of 2000, police in Karachi, Pakistan received a lead that a man by the name of Ali Akbar was attempting to sell a mummy on the black antiquities market for 600 million rupees, or about $11 million, and it was no ordinary mummy, but rather what was advertised as a “Persian Princess.” When police raided the home of Akbar, he folded under interrogation and led them to the house of his co-conspirator, Wali Mohammad Reeki, who lived in the rural desert region in the province of Baluchistan. There they found the mummy in question, along with its sarcophagus, and Reeki admitted that he had purchased the mummy from a man named Sharif Shah Bakhi after he had found it in the aftermath of an earthquake near Quetta, on the border of Iran and Afghanistan. The men were arrested, but the mystery of the mummy was just beginning, leading down a rabbit hole of strange artifacts, intrigue, and murder.

The fact that the mummy had supposedly been found in Iran suggested that it was likely Persian in origin, which would be an amazing find, since not only were mummies seen as a completely Egyptian design, but no mummies of Persians had ever been found. The mummy was taken to the National Museum in Karachi to be analyzed, where the mystery would only deepen. The body was found to have been wrapped in an Egyptian style, laid out atop a reed mat with a layer of wax and honey, and had a face mask and a golden crown, indicating royalty, but the most exciting find was a breastplate on the mummy on which was inscribed in ancient Persian, “I am the daughter of the great King Xerxes. Mazereka protect me. I am Rhodugune, I am.” In addition, the gilded wooden sarcophagus was also adorned with inscriptions from ancient Persia, all of which together seemed to point to the incredible fact that this was indeed a mummy of a Persian princess, which if true would be a completely game-changing archeological discovery never seen before. 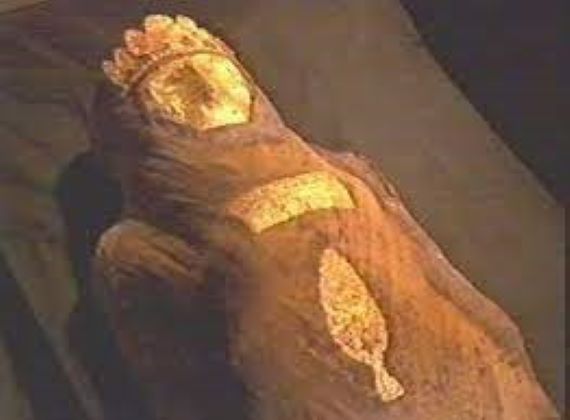 Pakistani archaeologist Ahmad Hasan Dani, of Islamabad's Quaid-e-Azam University, would go on to excitedly state in a press conference that the mummy was indeed a Persian princess, dated to around 600 BC. This ignited a feud between Iran and Pakistan over the rightful ownership of this unprecedented archeological find, with the Iranian Cultural Heritage Organization claiming her as a member of Persian royal family and demanding the return of the mummy, and even the Taliban jumped in to claim it as their own. With heated debate between all sides and protests in the streets, it was all turning into a political incident and potential disaster that was steadily reaching a boiling point. In the meantime, while all of this turmoil was going on, other archeologists were starting to have their doubts that the mummy was really a Persian princess or even a true mummy at all, with independent forensics tests raising some red flags.

First off, according to ancient language specialists, the cuneiform script on the breastplate and sarcophagus was found to have been written by someone who was not all that familiar with the ancient Persian language, rife with grammatical mistakes, and there were also traces of lead pencil marks that had been made to guide the carvings. The name of the Princess was also a Greek translation of the Princess’s name, "Rhodugune," that happened to post-date her supposed death by several centuries. In addition to this, a piece of the sarcophagus that was carbon dated showed it to be only around 250 years old, and on top of this, the mat below the body was found to be only about five years old. There were also oddities found in the body itself, for instance the fragile tendons and ligaments of her middle ear still remained intact, even though thousands of years had supposedly passed, and the mummification process had not followed strict Egyptian methods. For instance, the heart had been removed, which is something the Egyptians would have never done, as it was seen as vital for recreating one’s body when they reached the next world. Numerous CAT scans, accelerator mass spectrometry dating tests, radiocarbon testing, and X-ray scans would all go towards further proving that this had been an intricate hoax. In the end, it was estimated that far from an ancient Persian princess, this was the body of a 16-year-old girl who had likely died in 1996 rather than 600 BC., made up with modern day fakery to merely appear to be an ancient mummy.

Not only that, there was evidence to show she had been murdered for this very purpose. It was found that the “mummy” had died from blunt force trauma that had smashed the woman’s cervical vertebrae in her neck, probably with a heavy blunt instrument, and her back was also broken in half. Her organs had then been removed and her body cavity filled with table salt and baking soda as a drying agent to begin the fake mummification process. All of this was found to have likely been carried out within 24 hours of her death, making it seem like foul play must have certainly been involved. What had started as a black market antiquities case was now turning into a murder investigation. It was thought that a ring of fake antiquities dealers had gone through the gruesome extreme of actually killing this poor girl, or at the very least stealing her body soon after death, in order to make her into a forged mummy for cash. However, although police re-interrogated all those involved in the sale of the mummy, as well as several other suspects, this led nowhere. Making it all the more disturbing still is that in the very next year two more of these faked “Persian Princess” mummies popped up on the black market, quite possibly more, which authorities would link to the same criminal organization.

In the end, not only was no one arrested in relation to the death of this woman, but the victim was never identified. She languished away in the museum for some time before finally receiving a proper burial in 2008 carried out by the Pakistan-based charity, the Edhi Foundation. Although she has finally come to rest, she remains nameless, unclaimed, her life and death a mystery, forever to be known as simply the Persian Princess. What her story was or how many more like her there are out there we may never know for sure, and it is certainly a sad and ominous case.

Looking at Probably the Most Controversial Angle of Ufology: Deaths in the Subject