The Strange History of the Native American Ghost Dance

Towards the end of the 19th century the Native peoples of America were in a pretty rough spot. Before white settlers had arrived in the 17th century they had spread out from coast to coast, representing numerous tribes, each with their own unique legends, customs, and cultures, but as settlers moved west, they experienced tragedy. Frontier settlers and the U.S. government would actively take land from the Natives, relocating them and violating treatises with the tribes the whole way, with Native revolts met with military force and many tribes beaten into submission. Violent confrontations, massacres, subjugation, and assimilation of tribes were rampant, as well as the lethal spread of diseases such as typhoid fever, to which they had no defenses, and towards the end of the 1800s many tribes had been nearly decimated, their cultures disappearing just as surely as their land, values, and past glory, many tribes mere shells of their former selves. This would bring about a spooky tradition that would spread like wildfire to be held up by many Native Americans as a way to harness supernatural forces to bring about a change to their situation and balance the forces of the universe in their favor.

It was in this climate of the vanishing legacy of the Native American tribes that a shaman of the Northern Paiute tribe of Nevada had a potent vision. During a solar eclipse on January 1, 1889, the shaman called Wovoka, also known to the whites as Jack Wilson, claimed to have been visited by God disguised as a Native American. He would claim that in the vision, God had told him that the Natives could still regain their past prosperity and return the land to a bountiful, productive, and peaceful state, as well as resurrect their cherished tribal beliefs and banish evil from the world to reunite the living with spirits of the dead, even to bring the spirits to fight on their behalf against their oppressors. All they had to do was follow the strict adherence to a spiritual circular dance he called the Ghost Dance, which would gather forces from the spirit world to fight on their side, allow them to travel to the spirit world, bring back the buffalo, banish the white man, and usher in a new dawn of prosperity for all of the Native nations. According to Wovoka, if performed right, the Ghost Dance would even allow his people to achieve a life free from disease, old age, and death. 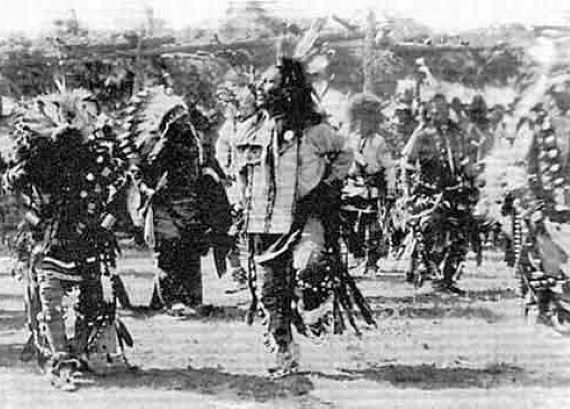 He had several more of these visions, and began preaching what he had been taught in these visions to anyone who would listen. Now Wovoka was not a nobody, and was far from just some ranting nutcase in the eyes of his people. Although he had been reduced to working on a Presbyterians ranch, where he had been influenced by the white settlers’ faith, including the belief in Jesus Christ, he was also a well-known tribal prophet, shaman, and “weather doctor” among his people, and so when he began speaking people tended to listen. Wovoka’s message of regaining control from the white man and taking back their land and heritage through these Ghost Dances resonated with his people, who were tired of being oppressed, attacked, and stolen from. Wovoka taught them the specific dances and songs that were required by God to make these visions come true, involving dancing in a circle for five straight days in shifts, until they could barely move anymore, all while carrying out various rituals and often going into trances, during which many participants claimed to see the spiritual realm, observe the future, talk with ghosts, and even be healed. He also preached the strict observance of a moral code that commanded that they work hard, love each other, and avoid warring with other tribes.

As word of the Ghost Dance spread more and more, Natives from other tribes began to come to see Wovoka and be taught by him, with the practice quickly sweeping throughout much of the Western United States, especially California and Oklahoma, spreading as far as the Missouri River, the Canadian border, the Sierra Nevada, and northern Texas. The teachings and Ghost Dance of Wovoka gained a foothold among many tribes, evolving to take on different details and attributes depending on the people, but all of them sought to end oppression by the whites and take their land back to a state of bountiful plentitude. Many tribes fully embraced this, with the Navajo being the only notable exception, never accepting the Ghost Dance and mostly eschewing it, calling it “worthless words.”

As the popularity of the Ghost Dance spread, some bizarre offshoots of Wovoka’s teaching began to spring up, such as the belief in “ghost shirts,” which were supposedly imbued with spiritual power through the Ghost Dance to become immune to bullets, and some tribes began to warp the original beliefs and values to take the rituals as a sign to violently rise up against the European settlers. To some tribes, in particular the Lakota, the Ghost Dance began to signify a way with which to cause great calamity on white settlers. They believed that through these dances they could find ways to invoke all manner of catastrophes against the settlers, all of which would wash their scourge from the land, and the Lakota holy man and shaman John Fire Lame Deer would say of this:

They told the people they could dance a new world into being. There would be landslides, earthquakes, and big winds. Hills would pile up on each other. The earth would roll up like a carpet with all the white man's ugly things – the stinking new animals, sheep and pigs, the fences, the telegraph poles, the mines and factories. Underneath would be the wonderful old-new world as it had been before the white fat-takers came. The white men will be rolled up, disappear, go back to their own continent. 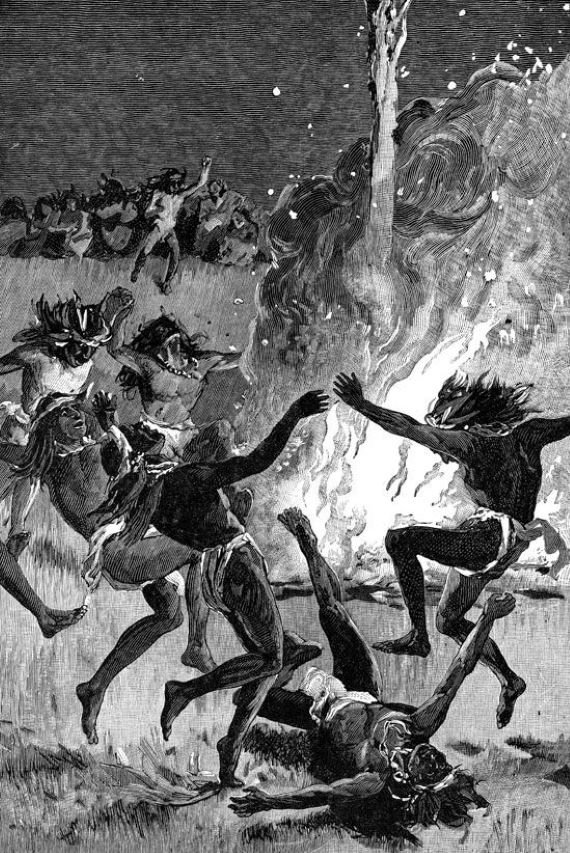 This increasingly sinister and militant take on the Ghost Dance made the ritual even creepier and scarier than it already was for the settlers. It was not lost on the settlers that a new wave of resistance from the Native tribes directly correlated with the belief in the Ghost Dance, and it was noticed that the dance was frequently performed by tribes before battle. This deeply troubled the U.S. military, who went as far as to take steps against the practice of the Ghost Dance, banning it and trying to stomp it out. This came to a head in 1890, when agents with the Bureau of Indian Affairs (BIA), who had been at the Lakota reservation in South Dakota for the purpose of overseeing the progress of breaking up the Great Sioux Reservation, installing white teachers and providing food aid as a part of the government’s efforts to assimilate the tribe, were spooked when the Natives began performing the Ghost Dance. This was seen as being tantamount to a brewing battle, and so reinforcements were called in, and in the meantime the Lakota chief, Sitting Bull, was commanded to make his people stop doing the Ghost Dance. He refused and was arrested, but before he could be apprehended one of his warriors attacked an agent and Sitting Bull was shot and killed in the following melee. This would indirectly lead to one of the worst atrocities committed against the Native people, and also ironically to the end of days for the Ghost Dance.

This incident would be followed by a massive influx of soldiers from the 7th Cavalry Regiment, which would ignite into violence once again just two weeks after the murder of Sitting Bull. The Natives were already upset about the death of Sitting Bull, and were amped up by doing the Ghost Dance as more and more soldiers poured in. The troops went about surrounding the Lakota Pine Ridge Reservation and collecting weapons from the tribal warriors, yet one young, deaf Lakota warrior refused to relinquish his rifle near Wounded Knee Creek. This led to an intense altercation, which very quickly snowballed into an eruption of violence that reverberates through history to this day. The U.S. soldiers panicked and began firing indiscriminately on the Natives, in the end slaughtering around 300 men, women, and children in what would go on the be called the Wounded Knee Massacre. The 7th Cavalry would face no punishment for this one-sided bloodbath, indeed even being awarded Medals of Honor, and it would effectively bring an end to the Indian Wars.

After Wounded Knee, the Natives were more or less defeated, and although there was sporadic resistance, they had more or less resigned themselves to their fate. They would be broken up, assimilated by white society, and their traditions would tragically begin to fade. They would suffer subjugation and an active effort to erase their heritage, the salvation promised by the Ghost Dance now a forgotten dream. The practice of the Ghost Dance began to die out like many other Native traditions and languages, although there were pockets of people who still secretly carried it out. Indeed, to this day some tribes still do the Ghost Dance, and in 1973 there was even a Ghost Dance carried out on the site of the Wounded Knee Massacre. It has never really died out completely, but its overwhelming popularity among many tribes was greatly subdued after the massacre, and today it is seen as mostly a curiosity and historical oddity. It is a unique peek into a crumbling society desperately trying to hold some sense of control over the oppressing forces hanging over them, and the Ghost Dance has become a curious feature upon the world of Native American lore.

Dead Aliens on a Welsh Mountain? A Weird Tale That Never Goes Away