Some historical figures who have fallen through the cracks have some amazing tales to tell. The story here revolves around a place with the rather fanciful name of Dreamland. It was an amusement park opened at Coney Island, Brooklyn, New York City, in 1904, existing side by side with two other large amusement parks called Steeplechase Park and Luna Park. It was started by the real estate tycoon and politician William H. Reynolds and it was in every way designed to overshadow the other nearby amusement parks, doing everything bigger and better with no expense spared, featuring elegant architecture, pristine white towers, and various high-class venues for all manner of attractions and exhibitions, including theater shows, an imitation Venetian canal, a train that ran through a Swiss alpine landscape, a “human zoo” that included a whole village of Filipino tribesmen, another village full of hundreds of dwarfs called the “Lilliputian Village,” the Dreamland tower, which was illuminated by one million lights, and countless rides, games, side shows, booths, and other attractions. In its day it was a major tourist destination. Among the many things to see and do here was one act that was one of the most popular there was, that of the mysterious lion tamer Captain Jack Bonavita, who managed to tame wild beasts and carve out a legacy as a rather odd figure.

Bonavita was born in 1866 as Johann Friedrich Gentner, later cutting his teeth in the circus business as an acrobat with P.T. Barnum, but he would later find an affinity for big cats. He seemed to have an almost preternatural rapport with the beasts, able to calm them, keep them docile, and get them to do his bidding, quickly earning him a reputation as a sort of "lion whisperer." His skills in this area were uncanny, and he devised acts with the fierce animals that had never been seen before. Working out of what was called the Bostock animal arena, he was a dashing, handsome daredevil known for his lively and dramatic stage persona, including military attire and a prominent handlebar mustache, and incredible animal shows. Among his many acts was one called “The Arm-Chair,” in which he would sit in a chair surrounded by a whole pride of lions that acted like housecats around him, as well as another act in which he would lock himself inside of a metal cage with 27 roaming lions.

At the time this was wild stuff that no one had ever attempted before, and no one could quite figure out how he was able to get these ferocious beasts to bend to his will and surrender to his every whim the way he did. By all accounts, the lions would practically bow down to him, although this did not always go to plan. On July 31, 1904, Bonavita was engaged with a show wowing the audience as usual when one of his lions, a strapping young one who was relatively untrained, named Baltimore, got a little too rough and clawed his arm. The story goes that he was rescued by a secret admirer in attendance, none other than Princess of Montglyon Rosalie F. Mercy d’Argenteau of Belgium, who marched up to the cage and distract the lion by poking it with her parasol, even riding in the ambulance with him to the hospital. The wound became heavily infected, and although Bonavita fought having it amputated for 8 months, in the end the arm had to go. Bonavita would not only go on lion taming, but would also marry his savior Mercy d’Argenteau, although it would only last 2 years. 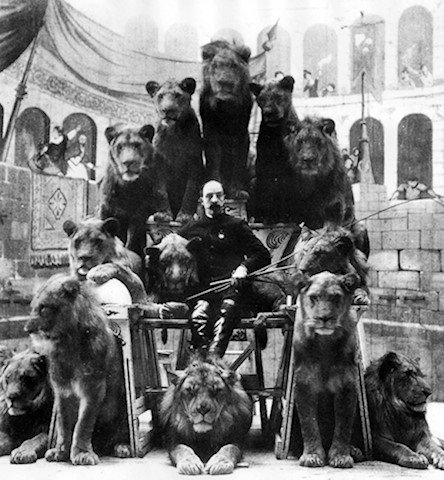 Bonavita continued to do his shows with one arm, which made him possibly even more famous, as a one-armed man rubbing elbows with dozens of lions wasn't something one saw every day. By 1911 he was a world-renowned star, but his days of lion shows came to an end when a disastrous fire razed the park to the ground on May 27 of that year, killing 60 of Bonavita’s animals in the process, with one of them being a lion named Black Prince, who ran out onto the street and was shot by police. Dreamland would go down in flames, literally, and was never rebuilt. Bonavita would go on to work in Hollywood, establishing an impressive career as an animal trainer, stuntman, actor, and director, while doing a little show work on the side at Bostock’s Circus and training animals at Frank Bostock’s farm in Los Angeles, California. He was still known for his amazing ability to get large and dangerous animals to do what he wanted, but his luck would run out on March 19, 1917, when a polar bear he was attempting to train turned on him and fatally mauled him before being shot dead by police who arrived on the scene. Bonavita would leave behind a legacy as one of the most daring and fearless lion tamers who has ever lived, and it is all a very unusual story about a very mysterious and enigmatic man.