Australia gets a lot of publicity for its huge variety of snakes, huge crocodiles in general and many other strange creatures, so Yowies – the Aussie version of Bigfoot – have a tough time getting any attention. Dean Harrison, head of the Australian Yowie Research organization, has been trying for decades to change that and this time he may have the proof to convince disbelievers – thermal images of two 9-foot-tall creatures that could only be … well, let’s let Harrison get the glory.

“Two large Yowies appeared from behind [a] tree. We estimated that they must have been at least nine feet (2.75m) tall and they made no noise arriving and no noise leaving that area. We wouldn’t have known if anything was there if it wasn’t for the thermal cameras.”

Harrison tells Sunrise on 7 News he was in the Gold Coast’s Springbrook National Park in Queensland on May 4 on a nighttime Yowie-hunting expedition with his assistant Buck Buckingham, who was manning the thermal camera. One of the Yowies appeared to first hug a tree, which Harrison says all Yowies do to hide. They were on one of a number of overnight expeditions Harrison has led recently. This was the first to record encounters – Harrison says they were using equipment that didn’t exist when he began hunting for Yowies.

He says there were no signs of other humans, but the Yowies knew humans were in the area because “we're playing music, we're playing classical music.” Is that really a good idea when you’re hunting for 9-foot-tall beasts – or is he implying that Yowies are pacified by classical music in a Frankenstein-ish sort of way?

“We were ecstatic, this was probably the best footage so far in Australia.”

Those who want to believe in Yowies but need more proof may look at these heat signatures the same way Bigfoot wanna-believers look at blurred photos and footprints – nice but not definitive proof, even if a leading hunter says it is. Harrison displays his Yowie knowledge by deciphering the heat signatures into parts of the Yowies – sloping forehead, deep set eyes, pronounced jaw and thick neck. (See a photo with details here.) That still may not convince many, but Harrison has been down this path before.

“I couldn’t care less if people refuse to acknowledge their existence. I’m not here to convince them, I’m here to provide the facts.” 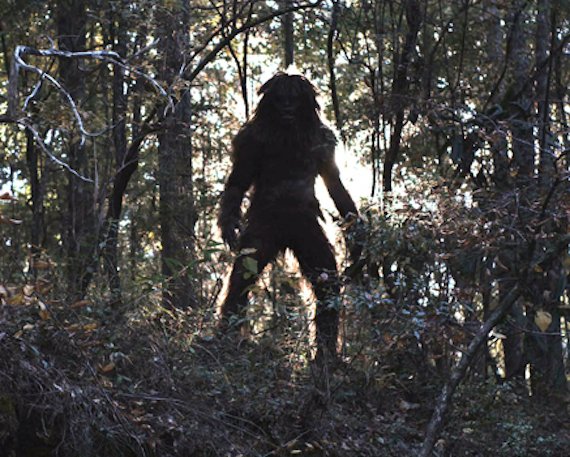 To Harrison and Buckingham, these heat signatures are facts. But, even if that’s not enough to convince skeptics, he points out that they are not his real audience.

“Encounters are often life-changing experiences, and I do this to provide evidence for victims, to vindicate them, that their claims are real.”

This is becoming a common theme in the paranormal world – military pilots who come forward with UFO sightings say they’re doing it for the same reason, as do alien abductees and Bigfoot spotters. Is this the path to someone finally coming forward with definitive proof?