From Folklore to Footprints: Ivan Sanderson and Bigfoot at Bluff Creek

“Science is defined in the dictionaries as the pursuit of the unknown; yet science today is coming more and more to insist that it not be bothered with this, and it has reached a point where anything that is not already known is frowned upon.”

These had been the remarks of Scottish zoologist Ivan T. Sanderson, expressed in his landmark book Abominable Snowmen: Legend Come to Life. One of the earliest serious offerings on the global nature of the possibility that relict hominoids—extant bipedal species similar to early human ancestors known in the fossil record—might have survived until recent times, Sanderson’s work presented both a thrilling possibility, as well as a target for critics.

In an essay titled “Unknown Hominids and New World Legends” published in Western Folklore Vol. 23, No. 2 in the spring of 1964, folklorist Basil F. Kirtley summarized that Sanderson’s exposition on surviving manlike beasts “states the opinion that there are five distinct types of hominid whose existence has not yet been conceded by science. These elusive beings, he urges, evolved parallel to homo sapiens and retreated ages ago, not into the high alpine zones with their lunar ecology, but into the densely forested montane regions of Malaysia, Central Asia, Africa, North America, Central America, and South America, areas where they can subsist precariously and marginally and at the same time elude the bloody depredations of mankind.”

Kirtley, while not a critic per se, nonetheless called the book “sensational” and “polemical”, adding that works like Sanderson’s and those of his colleague, Bernard Heuvelmans, “insist upon conclusions which are (to say the least) bizarre,” though noting how they “bring together from the most diverse sources numerous legends upon a pervasive and protean traditional concept.” That is to say, most scholars would agree that the widespread similarity of accounts of “wild men” all over the world appears to suggest their basis in folklore, rather than in fact.

Of course, just years prior to the publication of Abominable Snowmen, the widely accepted folkloristic interpretation of the wild man motif had seen a few noteworthy challenges. Although purported sightings of these creatures had existed for some time already (many of which would be featured throughout Sanderson’s book), more tantalizing evidence would begin to surface during the 1950s in the form of large footprints discovered at various locales that ranged from the snowy slopes of the Himalayas, to the soft earth of a construction site near Bluff Creek, California. It had been the contention of proponents like Sanderson that myths and legends don’t leave actual, solid impressions in the ground; or as archaeologist Myra Shackley would phrase it decades later, “imagination does not create unclassifiable footprints.”

At the heart of this contentious story had been those tracks discovered in California in the Autumn of 1958. From this discovery, the modern idea of “Bigfoot” was born after American newspapers gave this now-famous name to a presumed forest giant believed to have left the footprints found near Bluff Creek. Of course, the happenings in California that year would serve as the basis for a chapter in Sanderson’s book on what he classified as America’s version of the Abominable Snowman. However, a number of decades later, the story of the footprints at Bluff Creek—once regarded as being among the best evidence for Bigfoot—began to unravel with the passing of Ray Wallace, whose family came forward with the admission that he had been behind the prank all along.

It wouldn’t have been the first time Sanderson had apparently been fooled by a hoax involving fake footprints. One decade prior to the Bluff Creek affair, a set of large, three-toed footprints was discovered meandering along Clearwater Beach and other areas along the coastal waterways of Florida. These discoveries were followed by alleged sightings of what appeared to be a giant penguin which, after being reported in various newspapers, Sanderson took for having been the result of credible sightings of a massive penguin-like creature. It would only be revealed decades later in 1988 that the footprints had been a hoax undertaken by a pair of local pranksters named Al Williams and Tony Signorini. Sanderson, who died in 1973, would seem to have gone to his grave without any knowledge that the infamous giant penguin affair of 1948, or Wallace’s later hijinks at Bluff Creek, were hoaxes. 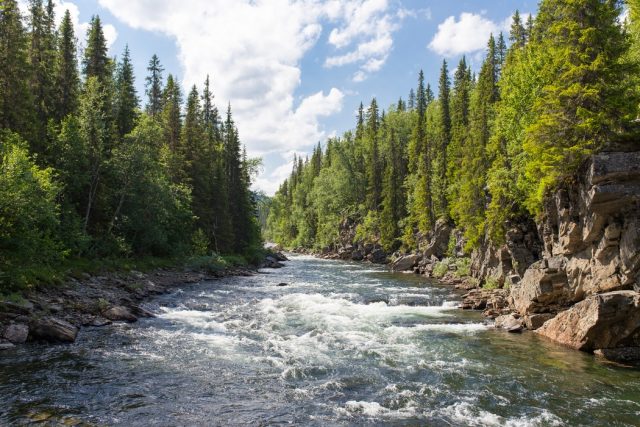 Even prior to the publication of his treatise on Abominable Snowmen around the world, it seems Sanderson had begun to have doubts about Ray Wallace and his story. This, despite Sanderson noting in his book that “Ray Wallace appeared to be a hard-boiled and pragmatic man,” who despite the character Sanderson ascribed to him, for some reason appeared to have “trouble keeping men on the job.”

In a February 1960 letter from Sanderson to anthropologist George Agogino, later recovered by Sasquatch chronicler Loren Coleman, Sanderson shared that he had received a message from a woman that operated a motel in southern Oregon, who said Ray Wallace and his brothers had been guests there during the winter of 1958-59. According to Sanderson’s source, the Wallace brothers used to drink on the porch outside the hotel office window, and the owner said she had overheard them laughing about the stories of Bigfoot, and even “describing in detail how Ray Wallace had made them with their, and others’, assistance by making imitation ‘feet,’ weighing them, and then being hauled up and down the slopes (by the new road) by means of the cables they used for clearing the logs out of the way.”

Sanderson, in other words, appears to have been clued in about Ray Wallace’s involvement in hoaxing the footprints at Bluff Creek even prior to the publication of his book. This raises the necessary question, then, as to why Sanderson would have referred to Wallace as “hard-boiled and pragmatic,” if he had in fact begun to suspect that Wallace was behind the unfolding story of Bigfoot at Bluff Creek.

According to researcher Joshua Blu Buhs, “Sanderson simply erased all of the problems with the evidence in his articles and, later, in his book.” In similar fashion to his unspoken doubts about Wallace, Sanderson had apparently suspected California taxidermist Bob Titmus of faking evidence—a suspicion that was never proven—regarding samples of purported Sasquatch hair later determined to belong to moose. While no moose exist in California, hair samples belonging to one and produced as possible evidence of Sasquatch might have been easily accessible to a taxidermist. Nonetheless, Sanderson wrote of the samples of hair and feces Titmus provided with what seemed to be confidence that they were genuine. “Sanderson,” Blu Buhs writes, “was fooling his readers, transforming a known fraud into a piece of irrefutable evidence.”

Such issues do indeed raise a number of questions about Sanderson, his discernment, and the credibility of some of the accounts he presented in his writings. They also raise obvious questions about his reliability as a reporter, and his reasons for wanting to present certain “facts” as though they remained unassailable, whereupon further review they appear to be questionable at best. Nonetheless, perhaps recognizing the problems with some of Sanderson’s presentations on the subject of Sasquatch and other purported relict hominoids should not be seen as cause for tossing all of them out. Despite the obvious flaws in his reporting, Sanderson still made a respectable number of contributions to this field of study.

Unlike the monstrous quarry he pursued as a reporter of happenings in the speculative world of fringe zoology, Sanderson was only human, after all… and therefore subject to the same flaws and biases as the rest of us when dealing with the less often explored areas of science and the natural world.

In the U.K. Government, It’s Not Just the Ministry of Defense That is Tied to UFOs