As a follow-up to my article on ufologists getting knocks on their front-doors from government agents, I thought I would share with you a few cases that revolve around sinister and bizarre phone-calls and UFOs. I'll begin with one of my own experiences that went down in 2003 - and when I was doing research into the death of Marilyn Monroe. It was around 2:00 a.m. and the phone rang. None of us like those situations. And all for the same reason: that, maybe, the voice on the other end will be calling with bad news. Terrible news. In a befuddled, half-asleep state I ran into the darkness-filled living-room and, without thinking of reaching for the light, fumbled around to grab the phone. As I picked it up, I heard what sounded like screeching static, such was the ear-blasting level of the volume. In a few seconds, though, I was able to figure it out. It was a recording of Marilyn’s never-to-be-forgotten rendition of "Happy Birthday" for JFK at the third Madison Square Garden in New York on May 19, 1962, even though JFK’s actual birthdate of May 29. And the recording was playing over and over on a loop. No call-number was available. A warning? Of what? Having someone play "Happy Birthday" down the line to me - in the dead of night - was certainly one of the nuttiest things that has ever happened to me, but it was hardly something guaranteed to keep me wide awake for the rest of the night. That whole story can be found in my latest book, Diary of Secrets. 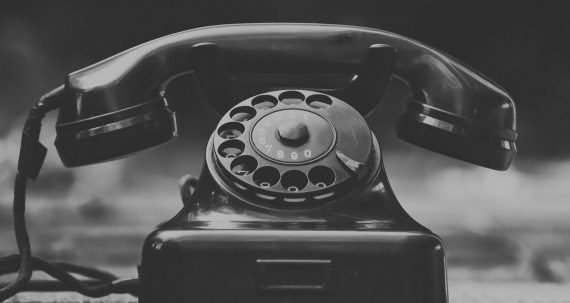 In 1987, Whitley Strieber’s book Communion was published. Five years later, in the latter part of 1992, the Strieber family started to receive disturbing, late-night phone calls. Quickly tired by the calls, Strieber arranged to have Caller ID attached to the family’s phone-line. It was a very wise decision, as it revealed something remarkable. The calls were not coming from someone in Ufology, after all. Rather, they were coming from a particular facility owned by a company called E.G. & G. Understandably angered, and puzzled too, Strieber called them up to see what was going on. He came straight to the point and told the receptionist on the line that not only had he received intimidating calls, but that he had proof – via Caller ID – that the calls were coming from E.G. & G. In other words: take that. What sounded like the voice of a very old man suddenly came onto the phone and assured Strieber that he would “look into it.” No further calls were made to Strieber’s home, which is extremely telling. Strieber didn’t stop there, though. He took on the role of detective and dug deeply into the world of E.G. & G. In the process, he discovered that the company had ties to NASA, to the Department of Energy, and even to the world’s most well-known secret base (which is surely the ultimate oxymoron), Area 51. Was someone at E.G. & G. trying to destabilize Strieber with all of those late-night calls? Maybe so.

In 1989, Ed Conroy, a San Antonio, Texas-based journalist, wrote a book titled Report on Communion. It was an independent study of Whitley Strieber and his incredible experiences, as told in Strieber’s 1987 best-seller Communion. In taking on the project, Conroy didn’t realize what he had got himself into. At least, not at first he didn’t. What began as an impartial investigation into Strieber’s claims, soon mutated into something very different: Conroy found himself under similar intimidation to that which would eventually hit the Strieber family. Weird phone calls were a part of the story. In June 1988, while Conroy was out of town, someone changed the message on his answerphone, in his apartment. And it was changed again. And again. Clearly, someone was screwing with Conroy – perhaps even trying to plunge him into states of paranoia and fear. On top of that, Conroy started to hear strange clicking noises on his phone. Weird, unintelligible voices would call, saturated in electric static and which echoed the tactics of the Men in Black when, in the 1960s John Keel was investigating the infamous wave of "Mothman" sightings in Point Pleasant, West Virginia. Such are the strange situations that can occur when we delve into the UFO puzzle.

The Marshall family of Perth, Australia had a strange encounter after seeing a huge, black, triangular shaped UFO flying completely silently, and at a dangerously low level, as they headed home after a night out on June 3, 1999. Although they did not tell anyone about their experience (at least, not at the time, anyway), late on the following night the phone rang. It was a man with a strange and somewhat European accent who warned them not to talk about the craft they had seen. In this case, the family forgot about the experience until years later when they saw a TV documentary on the Men in Black enigma - which referenced the issue of the MIB making threatening phone calls to UFO witnesses. Today, the family is solidly convinced that what they experienced was full-blown intimidation from a menacing MIB. And talking of the MIB...

Back in 2011, when I was promoting my second book on the MIB, titled The Real Men in Black, one of the things I was keen to discuss in radio interviews was the matter of MIB and telephone interference. We’re talking about strange voices on the line, weird electronic noises, and hang-up calls. Several people contacted me to report they were experiencing the exact same thing – but only after they had read my book. Before reading it? There were no problems. Not a single hitch. This was very much like certain issues that surfaced with regard to David Weatherly and his Black-Eyed Children book, and from the time of its publication in 2012. It was as if when people read my book (and David’s too) it triggered paranormal activity in the home of the reader. Yes, I know how wild that sounds, but it truly is what happened. Of course, I couldn’t fail to note that this also mirrored what happened to a good friend, Buffy Clary, when, on July 18, 2014, she dug deep into Rosemary Ellen Guiley’s book The Vengeful Djinn and was electrocuted. Thankfully, not seriously – but certainly enough to scare her half to death.

Telephone problems were absolutely rife throughout that period. As an example, Whitley Strieber invited me on his Unknown Country show to talk about my MIB book and we experienced endless amounts of very strange interference and odd sounds on the line. The exact same thing happened, at a later date, with Coast to Coast AM – something which took on even stranger proportions when my landline phone suddenly quit. So, I proceeded to use my cell-phone as a back-up. The battery drained astonishingly quickly, despite being fully charged. And, so, I had to hastily dig out of a cupboard an old, spare, cordless landline phone, which finally allowed us to complete the show.

Maybe, one day, I'll write an entire book on the matter of UFOs and weird phone-calls. I certainly have enough material.

Ancient Māori Knowledge of Antarctica Could Date Back to the 7th Century, Study Says