Of all the forms of unusual phenomena that occur in nature, ball lightning remains one of the most perplexing. Generally described as luminous spherical or sometimes shapeless masses of energy, they most often appear during or around the time of thunderstorms, lasting anywhere from just a few seconds, to sometimes moving about for several minutes.

“Ball lightning was seen and described since antiquity, often by groups of people, and recorded in many places,” wrote J. R. McNally in 1960 in his “Preliminary Report on Ball Lightning,” published in the Proceedings of the Second Annual Meeting of the Division of Plasma Physics of the American Physical Society. McNally added that ball lighting “is in general described as a luminous sphere, most often the size of a small child's head.”

There are some cases that have been documented over the years where manifestations of ball lightning appear to have been much, much larger than the comparison McNally gave.

Several historical observations of what appears to describe giant ball lightning have been logged since the middle of the nineteenth century. In November 1864, such an observation was made by residents of Florence, Italy, who said they saw “A white globe of fire many times larger than the full moon” which appeared to hang “almost motionless in the air” with “a large portion of the heavens was lighted up by it.” The strange luminous sphere reportedly had “shades of orange and blue passing over its surface, the latter gaining on the former.” After approximately one minute, the object suddenly vanished or dissipated, “not appearing to move from where it was,” although an observer noted that “only just before its disappearance a smaller ball was seen immediately below it, of a fiery orange colour, the first one appearing at that moment of the same hue.” 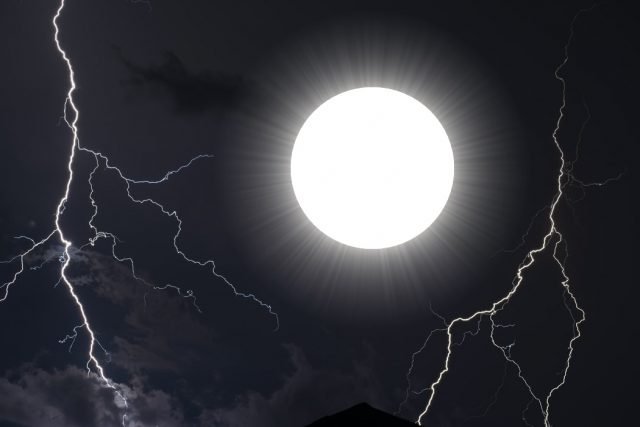 A similar observation made by a family in 1906 near Beccles, England, recounts observations of a massive “circle of light” that opened in the sky during a thunderstorm. Observers estimated that the size of the object was “2 or 3 times the diameter of a setting sun.” Coinciding with the appearance of the object had been a loud noise, described as “an appalling crash” that “came like the bursting of a big shell immediately overhead.” The primary observer recalled the light as being bright white in appearance, although his wife said it had a more yellowish hue. Both the wife and daughter observed the massive orb of light as it appeared to pass above the family home, with the daughter recounting that the light it produced appeared “like a great sun,” and illuminated their garden in a “blaze of light.”

Historic sightings of what may have been gigantic manifestations of ball lightning are not exclusive to more than a century ago. More recent observations were logged beginning in the 1970s, such as an observation of made near Albany, New York, in the summer of 1975. During the incident in question, another manifestation of gigantic ball lightning appeared coinciding with lighting that struck a building during a powerful storm.

According to an account of the incident, “Over a three second interval, four distinct lighting strokes, each following the same path, hit the building, and during this time an unmistakable fireball was seen near the ground an estimated 5 m to the west of the point of impact of the lightning stroke.”

Witnesses described that “The ball was very bright, fuzzy in appearance, equal in brightness to the lightning stroke, and orange-yellow in colour.” An account of the incident added that “Apparently, the ball was quite large, its size estimated to be approximately 5 m in diameter. It appeared at the moment the first stroke reached the factory and vanished when the final stroke disappeared.”

“The ball maintained a constant brightness for the duration of the entire flash,” witnesses said, which they said, “did not flicker on and off in unison with each individual stroke.”

Another instance occurred just years later in June 1977, near Fishguard at Dyfed, West Wales. “A brilliant, yellow green, transparent ball, the size of a bus with a fuzzy outline, floated down a hillside,” read an account of the observation. The massive sphere appeared to rotate, and “seemed to bounce off projections on the ground” for a period of several seconds before it “flickered out” and vanished.

On a summer night in 1983, motorists near Buckinghamshire, England, observed another gigantic ball of light hovering directly over a highway. Travelers who had been driving along the M1 Motorway said they saw a massive sphere of light just over the highway that was partially obscured by a bridge overpass. Based on the size of the overpass, the ball was estimated to have been at least 25 feet in diameter. 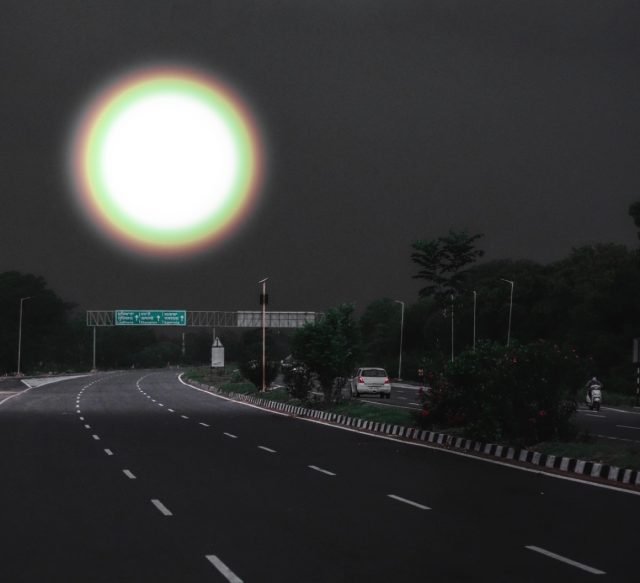 Then in November 1987, residents of Tulsa, Oklahoma, observed a “bluish sphere with red and yellow highlights, not more than nine feet in diameter” shortly after a lightning strike near an oil refinery. After hovering for five seconds, the sphere became irregularly misshapen before exploding with a loud noise. One of the observers, who had been located nearby while seated in a truck, described feeling heat that appeared to emanate from the exploding sphere.

Such giant manifestations, while rare among the available reports of ball lightning, appear to manifest and behave under similar conditions (i.e. thunderstorms and similar weather). Also, like the smaller varieties of manifestations, giant forms generally appear to only last for a few seconds, although some observations appear to remain for slightly longer periods. These larger manifestations of luminous electrical energy point to the diversity of the forms ball lightning can take, and might also offer a few clues as to the required conditions for the formation of this mysterious natural phenomenon.

World’s Smallest Dinosaur Update: It Was Actually a Lizard