An ancient tooth belonging to a massive Megalodon shark has been discovered on a beach in England. The 4.3-inch-long tooth was found on the Naze which is a headland on the coast of Essex.

While it is the second tooth belonging to a Megalodon shark that has been found at the Naze this year (and three were found in 2019), it has still been described as being an “incredibly rare” discovery.

The Naze Nature Discovery Centre posted the picture to their Facebook page (the photo can be seen here) with a description that read in part, “This tooth has been very well preserved and the serrated edge is still visible. The left-hand proportion is missing and it still measures a whopping 11 cm [4.3 inches]!”

The centre described the tooth in further detail, stating that it “was found encapsulated in London clay on the Naze beach, odd as this is a Miocene period fossil and the clay is Eocene. The meg teeth found at the Naze originate from a junction layer between the red crag and the London clay. Once the clay was washed off the tooth remained.”

In an interview with Newsweek, Jack Cooper, a PhD student who studies sharks and Megalodons at Swansea University in the U.K., said that it had a “...distinct dental band between the crown and the root and serrations along the tooth's cutting edge,” adding that “...the only area where Megalodon teeth have ever been found in the U.K. to my knowledge is indeed in the Essex area, specifically the red crag formation, although the teeth are quite rare there. If this is a find from the Naze, then it would be a very rare find indeed.” Furthermore, he noted that “...Megalodon teeth are so incredibly rare in the U.K. anyway that its finding at all is quite remarkable.”

The massive Megalodon shark, which lived from approximately 20 million to 3.6 million years ago, could grow to a whopping 20 meters in length (65.6 feet). Since it had serrated teeth, it would have feasted on large fish, whales, and possibly other sharks. And it had an exceptionally big mouth that could open approximately 2.7 meters by 3.4 meters (9 by 11 feet) with 276 large teeth. 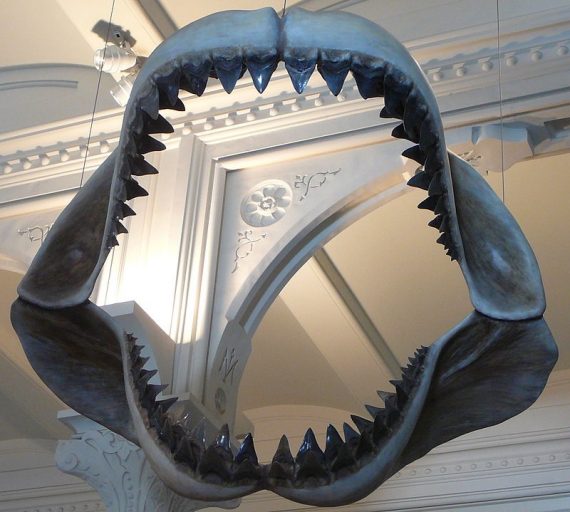 Megalodon sharks lived in warm tropical and subtropical waters around the planet. As a matter of fact, teeth belonging to the massive shark have been discovered on every continent with the exception of Antarctica.