A lake in Indiana with a very interesting history is currently for sale. For a million dollars, you could own a lake, land, and possibly a beast. Located near Churubusco, a creature called the “Beast of Busco” (also known as “Oscar the Turtle”) apparently lurks in Fulk Lake.

According to numerous reports, the gigantic snapping turtle is said to live in the lake and that legend has been around since 1898 when a farmer named Oscar Fulk apparently saw the creature. Fifty years later, in 1948, two locals named Ora Blue and Charley Wilson allegedly saw the same creature while they were out fishing and they described it as being approximately 500 pounds.

A farmer named Gale Harris who once owned the land that the lake sits on also saw the mysterious creature. Aaron Mathieu, who is the Assistant Director of the Whitley County Historical Museum and has a fascination with the beast, explained what happened years ago during Harris’ encounter when he was “...on his roof with his pastor,” and they “...supposedly saw a large turtle in the middle of the lake. He went and told some friends and they set out to capture this ‘Beast of Busco’.”

Mathieu went on to say that the locals “...set up traps, tried to drain the lake, numerous operations to try to capture the turtle,” but nothing was ever found. Harris’ stories of the beast got many locals interested so they parked their cars in the field, waiting to witness the enormous turtle. Numerous other people have reported seeing the creature as well but nobody has ever been able to capture any proof of it. The legend, however, still lives on and many believe that the “Beast of Busco” still resides in Fulk Lake.

“I think that’s the best thing that they didn’t capture the turtle,” Mathieu said, adding, “that story can go on forever without the capture. It becomes the Loch Ness monster, or another folk lore story that grows with the community.” 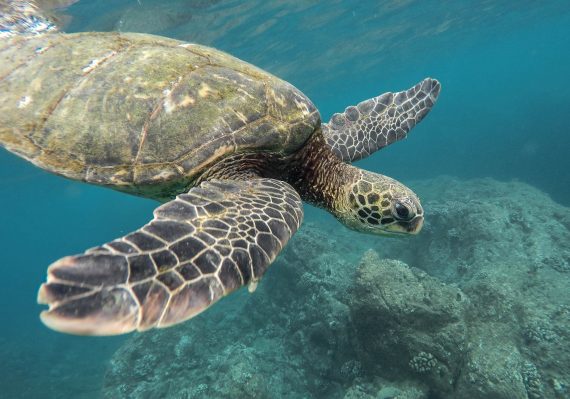 Justin Griffin, a realtor at Whitetail Properties who is selling the property, weighed in on the legend by stating, “I actually just learned that there was a 500 lb. turtle.” “He could’ve been a myth, he could’ve been as big as a dinner table. I read stories and it’s kind of fun to see what people said and what people believe.” It remains unclear whether or not the beast lives in the lake, but for a million dollars, someone can purchase the property with the lake and sit out there all day long waiting for it to show itself.