Fried eggs, Easter chicks, young fryers, henhouse raids, cockfights, Buffalo wings, roasts, soups – is there ever a good time to be a chicken? Turns out there once was – archeologists have discovered that chickens lived unusually long lives in the Iron Age and the reason was that the feathered fowl of that time were considered sacred birds too special to eat. If the hens in your backyard coop have suddenly switched from clucking to chanting, you may be in trouble.

“Using this method, we reconstruct the demographics of domestic fowl from Iron Age to Early Modern sites in Britain to reveal the changing dynamics of human–domestic fowl relationships. We highlight the advanced age that cockerels often attained in their early history and how their life expectancies have subsequently declined.”

‘Human-fowl relationships’ sounds like something you should Google with care, but a new study in the International Journal of Osteoarchaeology is focused on the history of domestic chickens – specifically, how long they lived during different periods of the human-chicken relationship. Today’s chickens (in the UK, where the research took place) live for between 33 and 81 days, but it’s difficult to age ancient chickens because they have no teeth to study for wear. That’s where osteoarchaeology – the study of human bones – comes in. Dr. Sean Doherty of the University of Exeter led a team which used a new method to date the age of domestic chickens (Gallus gallus domesticus) based on the fusion and size of the tarsometatarsal spur, which only develops after chickens reach maturity. Looking at that data from the Iron Age (800 BCE to 100 CE), when domestic chickens were introduced in Great Britain, caused the researchers to let out their own squawks.

“Of the 123 Iron Age, Roman and Saxon bones analyzed, over 50 per cent were of chickens aged over two years, and around 25 per cent over three years.”

In a press release, Dr. Doherty explains his theory why archeologists have found complete skeletons of Iron Age chickens showing no signs of butchery – they were considered to be sacred birds rather than Sunday dinners. There were also no signs that hens were cooped for breakfast egg laying – in fact, there were far more cocks than hens. Why were there so many roosters in Iron Age Britain?

“The possibility that cockfighting was practiced by the Romans is supported not only by the zooarchaeological evidence but also by finds of artificial cockspurs from several Roman settlements and provisioning of a cockpit at the Legionary Fortress at Exeter. The abundance of spurred tarsometatarsi in several temple assemblages, particularly those venerating Mercury and his companion animal, the cockerel, speaks of their religious significance.” 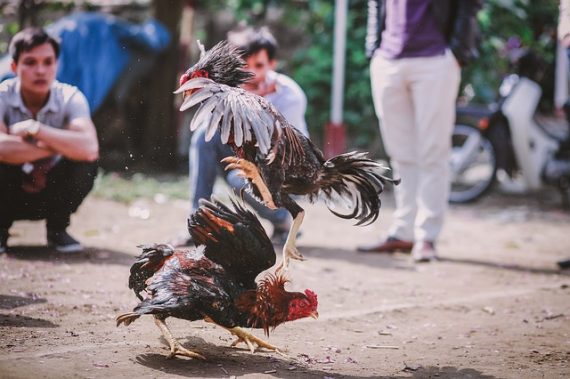 Cockfighting and Roman gods gave Iron Age cockerels their four-year lifespans, making them Methuselahs compared to today’s three-month averages due to accelerated maturity from the use of growth hormones. As the popularity of both went down, Brits undoubtedly heard from Babylonians – whose carvings show chicken-eating back to 600 BCE – and tried eating wings, breasts and those tasty legs where tarsometatarsal spurs quickly lost the long lifespan needed to grow.

Will chickens ever live those four-year lives again? It may be on their bucket list, but not ours.

Why I Think Sleep Paralysis is Paranormal: the Old Hag, the Hat Man and Werewolves