There are many people waiting for the Pentagon’s long-promised task force report on UFOs/UAPs – generally out of curiosity or fear. However, there is one group whose high anticipation is based on a need and desire for validation. That would be the Raelians – members of the International Raelian Movement (IRM) UFO religion founded in the 1970s by Claude Vorilhon, now known as Rael -- who believe humanity was created by the Elohim, an extraterrestrial species with advanced technology who have created forty Elohim/human hybrids -- the Buddha, Jesus of Nazareth, Muhammad and Rael. While some people know them for this, they get more publicity for their practice of daily sensual meditation and support for the right of women to go topless in public. Any wonder why they’re hoping for government validation?

“Whatever the conclusions of this report will be, we rejoice to the idea that 120 additional UFO sightings will be made available for the public, and for scientists and experts alike, to review—sightings that have been well documented by Army and Navy officers who are trained to recognize foreign technologies, but yet cannot arrive at a conclusion as to their terrestrial origins.”

In a press release, Brigitte Boisselier, PhD, spokesperson for the International Raelian Movement, states that Raelians are confident the report will “eliminate all possible terrestrial origins” of the unexplained UFOs encountered by military pilots and personnel. She then explains the Raelian belief that ancient science and technology was given to humanity by the Elohim, but we’re too simpleminded to see this. 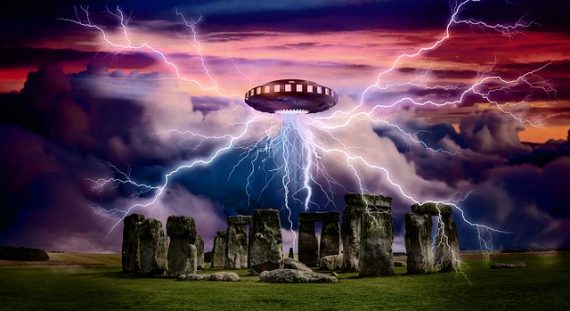 "References to these scientists and their work can be found in the ancient texts of many cultures, but our primitive ancestors—mesmerized by their technology—mistook them for gods."

For years, Rael and Raelian leaders have held international forums and petitioned the United Nations and world leaders to build an embassy for the Elohim, with a landing pad for their spaceship and a lounge and quarters befitting of their status. They want to emphasize that the Elohim are peace-loving, not conquerors, and point to the UFO encounters with Navy pilots as proof.

"The most revealing aspect of these sightings might not necessarily be the technology per se, but rather the display of maneuvers that suggest a high degree of playfulness and peaceful teasing of the Navy fighter pilots by whoever flies these crafts. Why such an alleged enemy would take so long to reveal itself over decades should be explained once and for all."

Will it? Boisselier believes that the UFOs and the report are all part of the Elohim plan to “increase public awareness on extraterrestrial life and prepare the world for their official return at the Embassy we wish to build to welcome them."

If the Pentagon report confirms what they believe, there will a be a lot of happy Raelins dancing around … topless, of course.

Mind Powers and the Strange Case of the Global Consciousness Project