With all the current debate over UFOs, their nature, and possible origins, one recurring question about their behavior reveals a sore spot for many who express doubtful opinions on the matter: why haven’t they said hello?

In other words, if UFOs are extraterrestrial visitors, why would they travel all the way to Earth from some distant location in the cosmos, but refrain from announcing their presence in some way?

An opinion piece by the staff of the LA Times recently quipped that “with all these amazing sightings, it still seems as though the biggest argument against extraterrestrial visitation is that these intelligent beings somewhere out there never want to get in touch with us. All that travel and no sushi or fried chicken or meeting Uncle Joe.”

Running with the idea that UFOs might indeed represent some form of extraterrestrial technology, it might be all the better that our presumed aliens keep their distance. As several scientists have argued in recent years, the end result of human contact with aliens might not go all that well, judging from our own historic instances involving contact between different cultural groups here on Earth.

“After we resolve our pressing scientific questions,” wrote former Army cryptologist Lambros Callimahos in a declassified research paper titled “Communication with Extraterrestrial Intelligence” now available at the NSA website. Callimahos added that “it might be appropriate to make discreet inquiries as to how we could live in harmony with our fellow man—that is, if we aren’t eaten or otherwise ingested by the superior civilization that had the good fortune to contact us.”

Writing from his own frame of reference as an Army cryptographer (and occasional contributor to entries appearing in famous Encyclopedias), Callimahos said of humanity’s eventual prospective contact with extraterrestrials that we “must keep a level head, not get excited, and be prepared to cope with problems the likes of which he has never seen—out of this world, so to speak.” 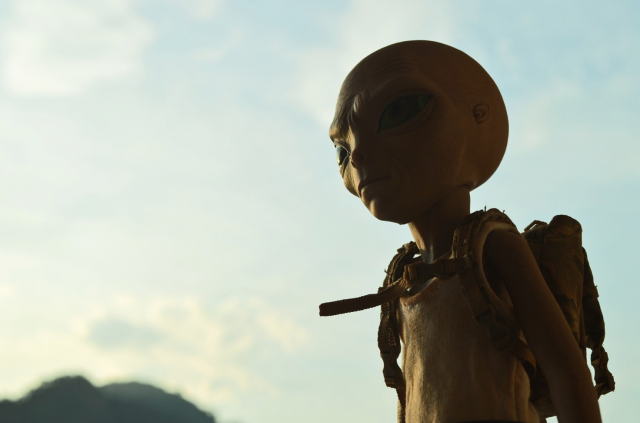 Although speculative "nightmare scenarios" like these about what could result from our eventual contact with extraterrestrials remain a concern for some scientists, this has not prevented ongoing attempts to find evidence of intelligent aliens, and many remain open to the possibility of attempting to communicate with them. If we were to presume that UFOs actually do represent intelligent visitors from elsewhere, it does raise a number of questions. These might include whether the aliens are intentionally trying to avoid us, perhaps out of fear, or for reasons involving their own unique moral standards (something akin to a "Prime Directive," in other words).

Then again, it is hard to imagine what kinds of intellectual or philosophical drives might govern an alien intelligence. The truth is, we simply have no idea how extraterrestrials might behave, and if UFOs represent such intelligent aliens, what their actual reasons for keeping their distance might be.

Indeed, as we have already seen, many have argued against the prospect of there being an extraterrestrial source behind UFOs based on the presumption that if they were aliens, it stands to reason that they would say hello. However, this argument fails to consider a number of factors, chief among them the possibility that UFOs might indeed be extraterrestrial, but still contain no actual aliens. UFOs, in other words, could very likely represent unmanned extraterrestrial probes that are either controlled remotely or can carry out their mission autonomously.

The notion that UFOs may be probes sent to Earth by advanced civilizations (that is, of course, if they do end up representing extraterrestrial technologies at all) has received some support in recent days from the scientific community. John Gertz, president of the Foundation for Investing in Research on SETI Science and Technology and former Chairman of the Board of the SETI Institute, wrote in a recent opinion piece for Scientific American that this possibility is both logical, but also represents a point of overlap between the often opposing camps of UFO proponents and SETI scientists.

“Both UFOers and SETI scientists should also agree that if some UFO sightings are genuine sightings of aliens, then they must be of robotic probes rather than vessels crewed by biological beings,” Gertz wrote. “If nothing else, such beings would be crushed by the g-forces of their purported, very large, accelerations,” he adds.

It is a fair point, but in addition to representing one of the few areas where common ground appears to exist between the UFO and SETI camps, it also brings us back around to a possible reason for the silence on part of UFOs: if they aren’t actually manned, then it would be difficult for there to be anyone around to make contact in the first place.

Granted, many UFO proponents would take issue with this possible resolution to the silence exhibited by presumed UFO occupants, and understandably so, if we take into account a sparring number of UFO cases from over the years that appear to describe observations or encounters with occupants.  Can all of these seemingly otherworldly encounters be ruled out?

Perhaps not. However, until there is a better way to document UFO observations, along with those even rarer instances involving alleged interactions with occupants, the great questions over the nature and possible origins of UFOs will persist--and likely do so very, very quietly--just as they have done now for decades at least, if not for centuries.