The Adelphi Hotel, which is located in Liverpool, England, has been referred to as the most haunted hotel in all of the United Kingdom. And the most recent ghostly evidence captured at the hotel is just more proof that it is exceptionally haunted.

The latest ghost hunt, which was conducted by Lee and Linzi Steer, left the couple “shocked” with startling evidence of swearing ghosts and spirit children. The couple stayed at the hotel on June 22nd and specifically booked room 105 because of its paranormal activity.

During their investigation, they attempted to make contact with the spirits as Linzi explained, “We asked if there were any spirits present and didn't really get a response.” “But after I asked what their names were we heard somebody say you b****** to us.” “We've never heard anyone say anything like this to us before, most of the time they tell us or don't speak at all.”

Lee added that the ghosts would not do anything that they asked and what they did do, it was purely the spirits that decided on their own. “We placed machines around the room we were staying in and they would wait until we weren't expecting it to touch the machines.” Also in their room, the door opened up on its own three different times.

While they were live-streaming their investigation to their Ghosts of Britain Facebook page, one viewer spotted what appeared to be two ghostly children. “To me it looks like two children and I feel like one of them is a girl,” Linzi stated, adding, “It reminded me of the twins out of The Shining.”

Additional paranormal activity they experienced was seeing lifts moving on their own and even the doors opening up; sudden temperature changes in their room; and hearing unexplained scratching sounds and whistling.

A picture of the ghostly children as well as a short video of the investigation can be seen here. 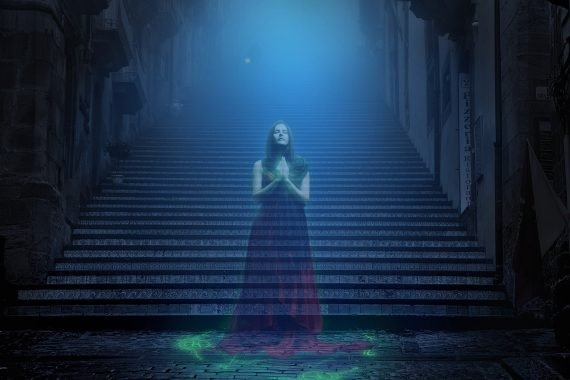 Another recent ghostly encounter at the Adelphi Hotel captured an apparition on video. Amanda Riddock and Maria Elliot were shooting a video in the hotel corridors when they captured what appeared to be a female apparition with long dark hair and wearing a white nightgown.

The women didn’t see the ghost while they were filming and only noticed her when they were reviewing their footage. What was so unusual about where the ghostly female was situated was that she was looking through the window of an unused stairwell that was blocked off to hotel guests so there wouldn’t have been anyone in there. A still photo of the female ghost can be seen here.