Lying out in the Australian wilderness, about 100 km south of the town of Longreach, in central Queensland, is a fairly unremarkable water hole along the Barcoo river called the Wilga Waterhole. It is pretty much in the middle of nowhere, and is so inconspicuous and mundane that most people would walk right on by it without giving it a second thought. Yet, this particular waterhole has achieved quite the reputation for being an ominous and haunted place that has terrified locals and travelers for hundreds of years with its eerie wailing and other strange phenomena.

According to the local legends, tales of something spooky going on at the Wilga Waterhole have been going on since at least the mid-1800s, when bushmen would often tell of “blood-curdling screams and devilish, unearthly shrieking” at night from the vicinity of the hole, usually rising in volume until they were nearly ear-piercing before stopping to bring silence crashing down again. Most people in the area knew better to avoid the cursed waterhole, but according to the lore, one of the most well-known stories of the hole involve a couple who actually decided to build a shack at the hole sometime in the 1890s. Author Bill Beatty would write of this tale in his 1960 book A Treasury of Australian Folk Tales, saying:

A new hand employed at Ruthven station built a slab and bark hut near the waterhole. He brought his wife to live there. She was a typical bush woman, sensible, practical and accustomed all her life to the loneliness of the outback. The couple had been there for a short time when one night the husband arrived home late, having been delayed, to find his wife in a state of collapse. She could tell him of nothing she had seen, but the most appalling shrieks had come from the waterhole. He felt she had imagined the cries of some nocturnal bird to be ghostly shrieks and yells. Soon after this episode the station hand was away for two nights. On arrival home he found his wife hysterical. Crying and sobbing, she told him of the terrible screaming and wailing at the waterhole that had caused her to almost lose her reason. He arrived at the hut early on the morning of his return to find that his wife was in a semi-demented condition. Again she told between fits of hysterical sobbing of the shrieking and wailing and screaming from the waterhole. Forthwith he took her away from the hut and after that no one ever lived in it again. 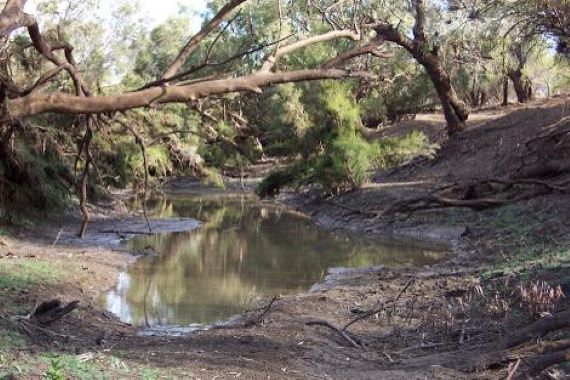 Another popular account from the Wilga Watering Hole also comes from the 1890s, and was also written about by Bill Beatty, this time in a 1947 article he did in the Sydney Morning Herald. On this occasion, it was claimed that a pair of two shearers who camped there had had a rather terrifying experience at the hole. They had heard the stories about the haunted watering hole, but didn’t believe any of it until they experienced it for themselves that evening. Beatty writes of the account:

Over a roaring log fire they sat and swapped stories and waited, their skepticism growing with each hour that slipped by. About 11 o’clock a wild bellow brought every man to his feet, and the party spread out to see what manner of beast had uttered it. There was laughter … when it was found that the bellow had come from an old bull wandering in the neighborhood. Billies were put on the fire and the panacea for all bush crises was brewed. After drinking their tea and smoking and yarning for some time longer, it was announced by one man that midnight was almost with them and that if anything was going to happen it would, following all ghostly tradition, happen soon. It was unanimously decided that once midnight passed all would declare the ghost of the Wilga Water hole to be non-existent, turn into their blankets and sleep. Midnight passed. Not even the voice of the old bull broke the bush silence. Accordingly, yawning and stretching, the shearers put away their pipes, rolled themselves in their blankets and settled down beside the dying fire.

Every man was soon asleep. None of them heard the first distant wail, but in a few seconds as the wailing increased in pitch every man was out of his blankets and on his feet. Suddenly there came a soft, distant walling that grew rapidly nearer and louder … the cries appeared to be in different keys – devilish, unearthly shrieking, such as no human voices ever uttered… The screaming, now ringing in their ears at deafening pitch, was coming from the waterhole. The shearers thought their eardrums would burst, but they were too terrified to move. Then, to their fervent relief, the shrieking diminished in volume until it was merely a weird wailing. Moments later, it ceased utterly, and once more the bush was deathly silent. When the men told their story at the shearing shed it was received with derision by most, but others mentioned that the Wilga waterhole was a notorious spot, and that the Aborigines always avoided it. Some of the old shearing hands said that horses were scared of it and drovers admitted that they never could get cattle to rest there. There were instances where cattle driven from distant parts had arrived there almost exhausted but had stampeded at sundown.

Indeed, one commonly reported phenomenon associated with the mysterious hole is that animals avoid it. There are apparently no birds here, no wildlife of any kind, and cattle, sheep and horses refuse to go anywhere near it, going as far as to forcefully break out of any paddock placed anywhere near it. In one 1942 edition of the Longreach Leader one rancher said of this animal aversion to the hole:

I do not believe in ghosts, but I have heard the screams which have been so much discussed where ever Western men congregate, and I know for a fact that stock will not camp on the banks of the Wilga waterhole. On one occasion I tried to camp a mob of old cows quite close to the waterhole. Most of them were milkers and I thought that nothing would frighten them. Everything went well until about 9pm. then they started to rush and ring. In the morning we were a good three miles from camp… The horses had also made a break during the night and were found, badly rung with the hobbles, standing shivering in a corner about five miles from the camp. 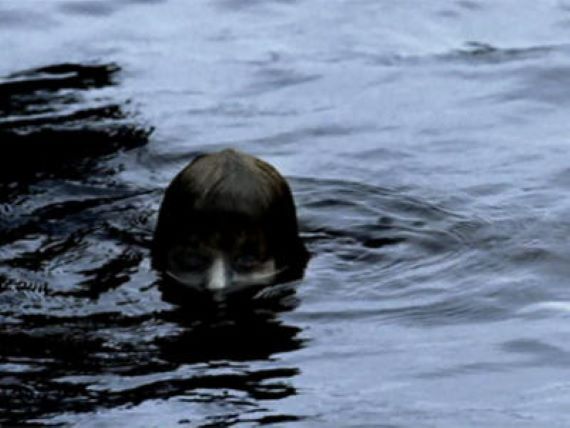 Over the years the sightings and accounts would continue, and there would be many attempts to explain what was causing the wailing and screaming at the Wilga Waterhole, with various stories put forth, most of them involving ghosts. In another tale a boundary rider also went mad and murdered his wife and kids, after which his restless spirit lurks about screaming out of either despondency or madness. Still another is that a young man was mobbed and lynched to be thrown into the Wilga Waterhole. One is that a woman who lived at a shack near the hole went insane and killed her child, and that her remorseful ghost now wanders about screaming out in torment over killing her baby. There is at least some corroborating evidence that at least the shack really did exist and that the murder of the child might have really happened, as author Phil Shields investigated the Wilga Waterhole personally and wrote of the shack:

I was surprised to find the ruin of the building that was mentioned in the story. The hearth and some of the forked bearers which held up the little stockyards still remain. Bits and pieces of discarded rusty horse gear litter the site. Even a greater surprise, was that there are two graves down a ways from the ruin. Local legend has it that these circular graves are the final resting place of the mother and her child. The grave perimeters are ringed with hand hewn ancient weathered wooden stakes. One is larger than the other and Ruthven’s owners are quite sensitive to possible damage that visitors may cause the graves, so please be respectful.

There are other ideas that the sounds are issued by the legendary Australian cryptic the Bunyip. More mundane explanations revolve around the idea that this is all merely the call of an owl or some other natural phenomenon. Beatty himself would muse:

Of the many theories that have been formed as to the origin of the unearthly noises, one is that they are caused by a subterranean channel. The channel perhaps connects the Wilga to others, and, under certain conditions when the water rushes through, it causes the shrieking and yelling. Nevertheless, an exhaustive examination has failed to prove this theory or, for that matter, any other.

Indeed, the mystery has never really been solved, and reports of strange goings on at the waterhole have continued right up into the present. It is all a very bizarre and little known local oddity that leaves us with many questions. Just what is going on here? what is causing this strange paranormal phenomena out in this remote area? Is it ghosts or something more mundane in nature? The answers remain unclear, and the Wilga Waterhole has continued to be a strange mystery of Australia.