The British Bigfoot: Guardians of Ancient Sites? They Just Might Be

One final thing for the controversy surrounding the thought-form/Tulpa issue: I thought that today I would expand on the matter of the "British Bigfoot" connection to all of this. As I mentioned in my previous article, there is a theory that the "creature" is a thought-form designed to guard ancient sites - and that has done so for millennia. Some might dismiss such things as nonsense, but the fact is that sightings of Bigfoot-type creatures in the U.K., and where ancient sites can be found, abound. And I don't exaggerate. The main reason why most people don't know of the strange phenomenon is because, simply, it doesn't get a great deal of publicity. And even when it is highlighted, the whole thing is dismissed or laughed at. Too bad. There is a British Bigfoot phenomenon; but it's certainly not a flesh-and-blood equivalent of something like an African gorilla. We're in totally different territory. With that said, let us now have a look at some of these strange cases in which stone circles and hairy hominids cross paths. Situated near to the picturesque, ancient hamlet of Milford, Staffordshire, Shugborough Hall is both a large and renowned country house that serves as the ancestral home of the Earls of the city of Lichfield. And its spacious grounds are connected to the nearby village of Great Haywood by the Essex Bridge, which was built during the Middle-Ages. Around 1750, the hall was greatly enlarged, and then yet again at the beginning of the 1800s. 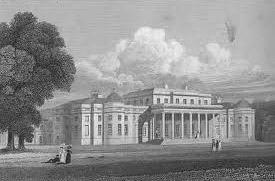 Today, Shugborough Hall is open to the general public and boasts a working farm museum that dates back to 1805, and which is complete with a watermill, kitchens and a dairy. Interestingly, the grounds of Shugborough Hall are also home to something known as the Shepherd’s Monument, upon which can be found a very strange and baffling inscription, and one which, many students of the puzzle believe, contains a secret code that identifies the alleged resting place of none other than the legendary Holy Grail. The Shepherd’s Monument is not the only such construction of note on the grounds of the sprawling old hall: The Tower of Winds, the Cat’s Monument, and the Doric Temple also have pride of place. But, get this: The thick and mysterious woods that surround Shugborough Hall are said to be the domain of nothing less than a diabolical, hairy wild man, or perhaps even several of them. Now, let's move onto another example.

Late one evening in September 1986, Mick Dodds and his wife were driving his mother-in-law back to her place of abode, which was a small but picturesque cottage in the Staffordshire village of Stowe-by-Chartley. All was completely and utterly normal until Dodds passed by the ancient and ruined Chartley Castle that overlooks the A518 road. Constructed on land that came into the possession of the Earls of Chester as far back as the 11th Century, Chartley Castle is a stone motte-and-bailey fortress founded in the thirteenth century by Ranulph Blundeville, the then Earl of Chester. Supported by the motte are, today, the still-standing remains of a rare cylindrical keep, with the inner bailey curtain wall still strongly flanked by two huge half-round towers, a gate-house, and an angle-tower. A strong counter-scarp bank and cross-ditch divides the inner and outer baileys, with another ditch and bank encasing the whole castle. Notably, Chartley Castle is to where – on Christmas Eve, 1585 – Mary, Queen of Scots, was taken before being moved to Fotheringhay for execution on February 8 of 1586. And, according to Mick Dodds, Chartley Castle just might be home to a literal British Bigfoot...

Mick Dodds says that after dropping his mother-in-law off at her home, he and his wife began the journey back to their own abode, and what they assumed would be a stress-free, night-time drive through Staffordshire’s engaging countryside. How completely and devastatingly wrong the pair was. According to Dodds, as they drove along the road, and with Chartley Castle rapidly closing in, he was forced to violently and suddenly slam on the brakes as a huge stag ambled slowly – yet majestically, too – across the road directly in front of them. The sight of the massive beast was enough to both amaze and gob-smack Dodds and his wife in equal amounts. But that was nothing at all compared to what supposedly happened immediately thereafter. A hair-covered man-beast charged across the road, provoking total terror for husband and wife. Moving on...

Reports of hairy wild men absolutely abound throughout the English county of Staffordshire, but there is one area of the county that seems to attract a great deal more than its fair share of such activity. Its name is deeply familiar to one and all throughout the area as Castle Ring. Located near to the village of Cannock Wood, Castle Ring is an Iron Age structure commonly known as a Hill Fort. It is 801 feet above sea level, and its main ditch and bank enclosure is fourteen feet high and, at its widest point, 853 feet across. It has to be admitted that very little is known about the mysterious and long-forgotten people who built Castle Ring, except to say that they were already in residence at the time of the Roman invasion of A.D. 43 and remained there until approximately A.D. 50. Some suggest that the initial foundations of Castle Ring may even have been laid as early as 500 B.C. Moreover, historians suggest that the creators of Castle Ring might have represented a powerful body of people that held firm sway over certain other parts of Staffordshire, as well as significant portions of both Shropshire and Cheshire at the time in question. Red-eyed, ape-like monsters have been seen late at night, and in the early hours, in the direct vicinity of Castle Ring. 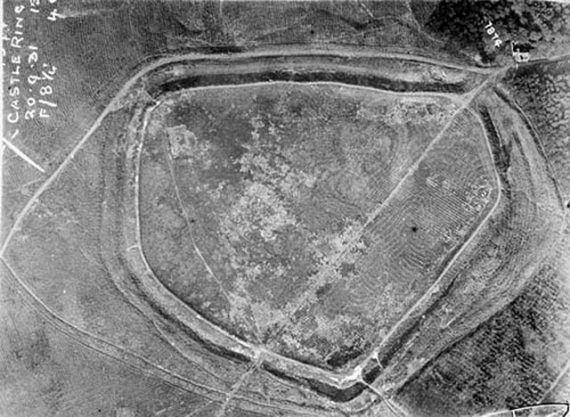 Castle Ring from above

Neil Arnold, an expert on strange creatures in the U.K.,  says that the county he lives in (Kent, England) "...has had sporadic reports over the years. [It] still harbors forest area and also heavy woodland, and these woods are steeped in history and folklore [and] figure quite heavily with some reports. But a majority always seem to come from already eerie and mystical places, where in the past there have been ghost sightings, rumors of other strange creatures and also areas that seem to attract legends of black magic, ancient stones [italics mine], white witches, pagans, etc." Now, onto our final example. Possibly of relevance to the theory and observations of Neil Arnold is the story of a noted Devon folklorist and acclaimed writer, Theo Brown. The author of such titles as Devon Ghosts and Family Holidays Around Dartmoor, and someone who - as we have seen - had her very own experience with Devon’s notorious Hairy Hands, Brown collected a number of deeply similar stories to those cited by Neil, including one chilling recollection by a friend of hers who had been walking alone at dusk near the Neolithic earthworks at the top of Lustleigh Cleave, which sits on the extreme east side of Dartmoor, in the Wrey Valley.

Lustleigh Cleave is an extraordinarily strange place at the best of times, and it appears to be one of those ‘window areas’ that Ronan Coghlan described earlier, and where an inordinate number of unexplained incidents and anomalous phenomena seem to take place on an amazingly regular basis. Moreover, the remains of prehistoric stone huts can be seen in the direct vicinity, and an ancient burial monument, Datuidoc’s Stone - which is estimated to have originated at some point around 550 to 600 A.D. - still stands to this very day, pretty much as it did all those thousands of years ago. Jon Downes says of the weirdness that dominates Lustleigh Cleave: "I have got reports of sightings of a ghostly Tudor hunting party, of mysterious lights in the sky, and even the apparitions of a pair of Roman Centurions at Lustleigh Cleave." But, adds Jon, getting to the most important aspect of the story, "Theo Brown`s friend saw, clearly, a family of 'cave men,' either naked and covered in hair or wrapped in the shaggy pelts of some wild animal,  shambling around the stone circle at the top of the cleave."

As you can see from the examples above, in the U.K. cases of monsters and ancient sites having a connection are not at all rare. In fact, I could write an entire book on the subject - if I wanted to. Could all of these supernatural creatures be Tulpas? I think so.