The Curious History of the Miraculous Healing Royal Touch

The power of healing hands has sprung up throughout history in a variety of far-flung cultures. The idea that someone might have the power to lay hands upon someone who is sick or injured and instantaneously heal them seems to be irresistible. Such tales are many, with as many different ideas as to what lies behind these seeming miracles as there are people who have believed in them. One prominent case of this belief that managed to spread throughout Europe for centuries is that royals have the power to heal with their touch, and there is much talk of this going back hundreds of years.

The idea that monarchs were imbued by a sort of divine healing power goes back centuries into the histories of many European countries. It was long thought that these rulers had the ability to cure by touching or stroking the diseased, evidence of God’s power working through them and their positions as above and beyond normal humanity. One of the first recorded occasions of using this royal healing touch was made in the 11th century, with the Anglo-Saxon king Edward the Confessor (1042–1066), who used it to cure an affliction called scrofula, also known by its more scientific sounding name tuberculous cervical lymphadenitis and commonly called “The King’s Evil,” which was basically swollen and discharging tuberculous lymph glands of the neck. He would lay his hands upon these patients, put a stamp around their necks, and they would give a penny donation for his troubles, with the effects reportedly being instantaneous and miraculous. William Shakespeare himself would write of Edward the Confessor’s royal touch in Macbeth, writing:

A most miraculous work in this good king;

Which often, since my here-remain in England,

I have seen him do. How he solicits heaven,

Himself best knows: but strangely-visited people,

All swoln and ulcerous, pitiful to the eye

The mere despair of surgery, he cures,

Hanging a golden stamp about their necks,

Put on with holy prayers: and 'tis spoken

To the succeeding royalty he leaves 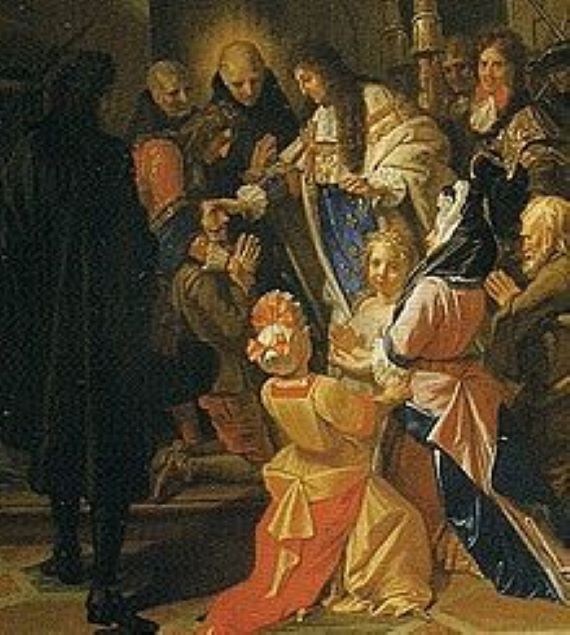 The practice would become more widespread among royalty all over the continent, and would branch out to be used to cure all manner of problems, including rheumatism, convulsions, fevers, blindness, goitre, and other ailments, usually on Holy days and with Henry VII introducing the tradition of a gold coin called an “Angel,” which had emblazoned across it an image of the archangel Michael defeating a dragon. These coins would be given out to those who received the royal touch, often with the coin pierced and attached to a ribbon that could be placed around the patient’s neck, all a part of an elaborate ritual that included reading passages from the Gospel of Mark (16: 14–20) and the Gospel of John (1: 1–14), as well as other prayers. The patients were then instructed to wear the coin constantly, in order for the healing to more fully take lasting effect. Whether these patients were ever really sick or not, the coins were valuable and much appreciated by the poor who came to be healed.

By the time of Charles I, the use of the very expensive Angels was replaced with that of smaller silver coins. The royal touch was for a time so common that some monarchs would touch up to well over a thousand people a year, and it was especially popular in France, where it was embraced, and where Louis XIV of France is said to have touched 1600 persons on one Easter Sunday. Indeed, the practice was particularly popular in France, where it was used far more often than in England and was given a certain extra paranormal boost, with the effects even more impressive and far-reaching than ever before. The demonologist Pierre de Lancre (1553–1631) would even claim that dead French monarchs could perform the healing touch from beyond the grave, and many desperate people came to France from all over Europe and beyond to be healed by its kings. 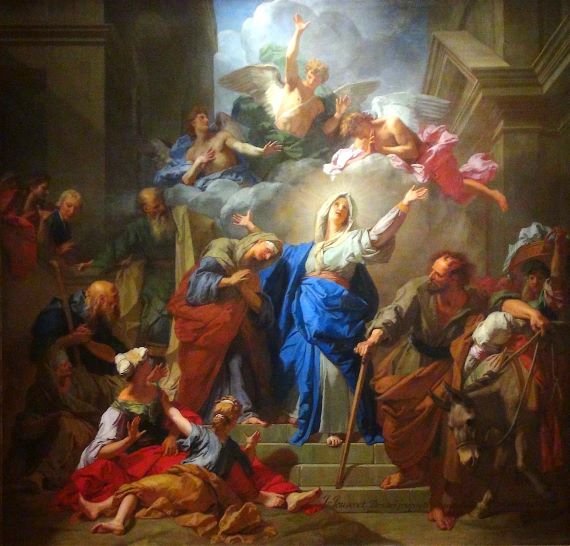 Meanwhile, in England some monarchs were not keen on performing the ritual, while others used it only sparingly. Gradually, it fell out of favor and was used less and less frequently, but the English monarch Charles II would bring it back in a major way during his reign from 1660 to 1685, having already warmed up giving frequent healing touches while he was in exile in the Netherlands in the 1650s. When he came back into power during the Restoration of the Monarch, Charles II not only brought back his own version of the Angel coin, but also spent hours and hours of each day tending to the sick, most often those with scrofula, as it was experiencing a surge at the time, and it would be claimed that during his 25-year reign he laid hands on about 100,000 of his subjects. It is not known exactly why Charles II pushed so hard to make this royal healing a thing, but he is widely considered to be the one who performed the ritual more than any other.

In later years, the practice would go through periods of popularity and remission, until when monarchs such as William III (r. 1689–1702) and Mary II (r. 1689–1694) were refusing to take part in it, calling it all superstitious mumbo jumbo, and George I (r. 1714–1727) permanently discontinued the practice, calling it a “superstitious and insignificant ceremony.” The ceremony would eventually disappear in England in 1732, when it was struck from the Book of Common Prayer. Even in France, where it remained popular, the ritual was being used less and less frequently, its last known official usage being when Charles X (r. 1824-30) touched 121 of his subjects at his coronation on May 29, 1825. After this the practice sort of faded into history and has been forgotten. There is no way to know why anyone thought this actually worked, or why there are so many accounts of miraculous cures using the Royal Touch, and it remains a curious historical oddity.

Spies, Secret Agents and a Connection to UFOs and Monster-Hunters