The Fantasy Writer Who Bought a Haunted Mansion in Ireland

The majestic Hollybrooke Hall, also known as Hollybrooke House, has an imposing and grand presence. Located just outside Bray, Ireland, it sits at the end of a long drive through quaint gardens, ancient stands of mature trees, grass and flower beds, and stately gothic granite posts. Built in in the 1830s and designed by William Vitruvius Morrison for the Hodson family, the house itself is an impressive cut-granite Gothic structure with numerous high chimneys, pointed gables, gothic arches, crenelated battlements, and massive stained-glass windows, and a vaulted grand hall, giving it the appearance of being like something out of some dark fairy tale. The original occupant was Sir George Hodson, 3rd Baronet and a hereditary knight, who lived there with his family and also designed some of the outbuildings himself, adding extensively to the house and its property all the way up to his death in 1837, after which it passed through several owners and was separated into five separate residences in the 1970s. However, according to the stories, Hodson has never really left, and Hollybrooke Hall has become known as very haunted.

The ghost of Sir Hodson has been sighted by many over the centuries wandering around the grounds or standing in the windows looking wistfully out over the countryside, and some of the reports of hauntings here are pretty intense, indeed. One of the best accounts is that of the popular fantasy author Katherine Kurtz, most well-known for sixteen historical fantasy novels in the Deryni series. Kurtz has written numerous novels and short stories, including those on the occult, and spent decades in Ireland as a naturalized citizen. It seems somewhat fitting that a fantasy and occult writer should come into possession of a haunted Irish mansion, and that’s what happened, with Katherine taking up residence here in May of 1987 with her husband Scott. Things started off a little weird from the beginning, when they found a mint-condition 1886 gold half-sovereign lying under a coating of grime on the edge of the bathtub in the bathroom they were intending to renovate. There was no explanation for why it should be there, and the only thing that they could figure was that it had something to do with a rumored lost treasure in the house that the previous owner had told them about. But why was that coin just sitting there in the bathtub? It was certainly odd, but the real strangeness was about to begin.

The couple sort of just filed it away as a strange coincidence and went about continuing their renovations in the old house, which at the time was without electricity or plumbing. Much of their initial work involved cleaning out the old, cobweb infested house, as it had not been occupied in years, and as they went through the old gothic structure it would have had a spooky enough vibe without the sudden appearance of disembodied voice singing. Both of them heard it, and when they stopped what they were doing they could tell that it was a voice singing the song “It's a Long Way to Tipperary.” As that voice echoed through the halls they were rather baffled, as no one else was there but them, and Katherine would say of it:

There was no mechanical or electrical apparatus in the house at the time to account for any such rendering of any song, much less “It's a Long Way to Tipperary.” Furthermore, the version we both heard had the tinny quality of an old gramophone recording. We do own an old gramophone, but it was still in our rented house, several miles away.

They did an entire sweep of the house and the grounds, but could find no one else there and nothing to account for the eerie singing. After this, the paranormal phenomena would graduate in intensity. They would frequently hear anomalous noises like voices, whistling, or the sound of footsteps, and doors would sometimes open and close by themselves. On occasion, they would hear a door open or close, only to go to it to find it firmly closed and locked. The back bedroom of the house seemed to have the most activity, and Scott and their housekeeper Lucy would even claim to have seen shadow figures lurking about there. Whatever presence was there apparently scared their cat, who would sometimes hiss or become agitated for no discernible reason, which was rather out of character. Katherine would say that on one occasion she was sitting having a chat with a friend when her cat had jumped into her lap in a very upset state, obviously scared, and that was when she herself had the distinct sense of something unseen in that room with them. She says of this:

Now, I had absolutely no sense of personal fear. But when it became clear, from Edgar's staring, that whatever it was, was approaching, about to pass between us and the TV, I told “it” that it was perfectly welcome if it was friendly, but please not to scare my cat! At which point, it simply wasn't there anymore—much to Edgar's amazement and lasting suspicion. I think it took him half an hour to stop looking for it, whatever “it” was. 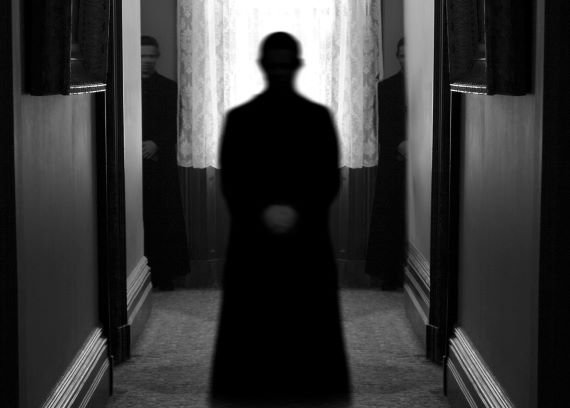 According to Ketherine, guests to the house have often been spooked at night by the strange phenomena that occur there, to the point that on at least one occasion a friend of theirs had been convinced there was an intruder in the house, but no one was there. The most frightening paranormal activity is the appearance of actual apparitions, including that of a man presumed to be Sir Hodson, as well as a “tall, elegant woman in a long grey or fawn-colored skirt, a white blouse with leg-o-mutton sleeves, and her hair done up in a Gibson-type coiffure.” It seems that Scott and the housekeeper Lucy have seen the apparition the most, and Katherine says of this:

Scott's first sighting was a classic one. He was on the phone to America one night, sitting in the library with a clear view toward the great hall stair that crosses from the first half-landing to the second, when he saw a long-skirted woman walk up the stairs and disappear from sight as she turned the angle. A week or so later—and we hadn't mentioned Scott's sighting—Lucy was hoovering on the upstairs landing just outside my office when she saw the lady pass the doorway arch that leads from the landing to the bedroom corridor, heading from the direction of that bedroom into the master bedroom. Since Lucy only caught a glimpse of the woman, though her later description pretty much tallied with what Scott had seen, she initially mistook the woman for me.

Katherine herself claims that she has not seen any apparitions, much to her disappointment. It doesn’t seem as if any of the paranormal activity here has been malicious in any way, and it looks as if Katherine and her husband sort of came to a peaceful coexistence with the entities. They would eventually move back to the United States in 2007, to an historic house in Virginia, and the Hollybrooke House would once again go back onto the market. It seems that this is some sort of residual haunting, meaning that these are perhaps scenes from history playing out in our reality like images upon film, which would seem to explain the total lack of awareness the apparitions seem to display, merely mindlessly going about their routines, although it is hard to say for sure. Whatever the case may be, it is all certainly a bizarre sequence of events surrounding a very old and creepy place, and we will see what any new owners encounter there.

UFOs: What the U.S. Government Knows and What it Doesn’t Know