Lying just southwest of Escondido, in San Diego County, California, is a rural unincorporated residential community called Elfin Forest. Among the scattered houses are rolling hills, unspoiled campgrounds, and numerous hiking trails through winding pathways through ancient gnarled and twisted trees, and the whole of it covering around 700 acres of forests and hills. The area is home to chaparral and coastal sage scrub, much of it endangered and found nowhere else on earth, as well as many unique native bird species, reptiles and amphibians. The area is very popular for hiking and horseback riding along the many serene trails to be found in the Elfin Forest Recreational Reserve, as well as for the picnic areas and scenic mountain viewing points, and much of it possesses a charming and at times otherworldly or eerie ambiance like something out of a fairy tale. It is perhaps this quaint mixture of natural beauty and the surreal atmosphere that has helped propel the many spooky ghost stories that pervade this place, and Elfin Forest has gained a reputation as being one of the most haunted places in the world, with all manner of tales of ghosts and other paranormal entities lurking within the twisted trees.

There are so many weird stories and legends orbiting the area that it is hard to even know where to begin. One of the most well-known tales concerns an area called Harmony Grove, where in the 19th century a group of mystical Gypsies supposedly set up a commune. As soon as they moved into the area, rumors began that they were holding rituals and séances out there in the forest, and the story goes that they had an underground cavern and cave system where they would engage in all sorts of perverse and weird occult activities, including human sacrifices. It did not help at all that they dressed very eccentrically, with long flowing gowns and various cryptic amulets and charms. There were also stories that the Gypsies were conjuring up the spirits of Indian children who had died, with locals increasingly reporting that they could see the apparitions of these children roaming about at night or the early hours of morning, or could hear their disembodied giggling or shouts. There would also be found anomalous footprints from the ghost children as well, and this was all said to be because of the Gypsies.

According to the lore, none of this sat very well at all with the increasingly frightened locals, who finally managed to conjure up the bravery to form a mob to drive the Gypsies away. This mob then descended upon the mysterious commune to viciously attack the Gypsies, killing a few of them before they could escape. Those who lived then allegedly placed a curse on the land, and one of them allowed herself to be killed so that she may become the protector of the area. This Gypsy would then from then on be sighted as a spectral woman dressed all in black and riding a black steed, with the supposed power to be able to kill with a glance. She will supposedly spiritually mark trespassers, and if they ever come back she causes them to drop dead. Another purported power of this black-clad witch is the ability to cause insanity or to incite a primal fear that forces visitors to flee screaming in abject terror, and she continues to be sighted to this day.

Other phenomena reported from Harmony Grove to this day are sudden cold chills, shadow figures, the ghosts of the Indian children, and rather oddly the ghost of a man in a coat and bowler hat with a cane, looking like “a proper Englishman.” Who is he? Who knows? Interestingly, in more modern times, this place has had another commune of occultists and spiritualists spring up in the area, who started the Harmony Grove Spiritual Center and claim to have made frequent contact with the ghosts of the Indian children, Gypsies, and even the English gentleman. Whether Harmony Grove is really haunted or not, it is apparently a very spooky place to be, which has made it popular with paranormal investigators, occultists and curiosity seekers.

Another popular story from the Elfin Forest is that of the White Witch. Her story begins back in the 19th century, when a young woman was found aimlessly wandering around in quite a state. Her clothes were in tatters and she was wild eyed and terrified, claiming that bandits had attacked and killed her husband and child. The woman was found to be one of the local villagers, and her and her family had disappeared the day before, so this was very alarming news for everyone if such bloody killers were in the area. The woman was nursed back to health, and after that apparently went a bit off the deep end, ravenously studying about magic and the occult, as well as supposedly going off at night to meet with witches and Indian shamans. According to the tale, she was studying to be a magic user and witch in order to get the power she needed to get revenge on those who had killed her husband and child. One day, she told the villagers that her training had been completed, and that she was going to go kill the perpetrators, after which she walked off onto the woods to never be seen again. At least not alive. 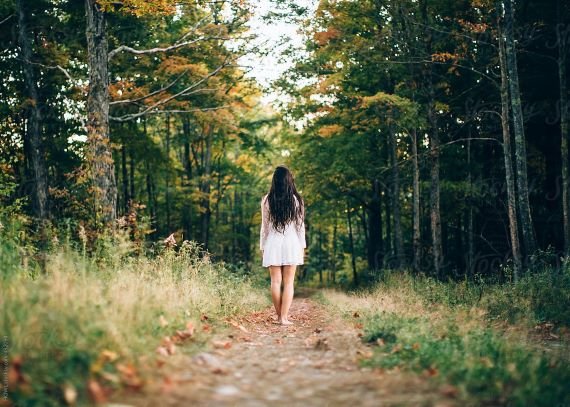 In the years after this, people began to report seeing a spectral woman dressed all in white, who witnesses were sure was the witch. The White Witch has been spotted by campers and hikers at Elfin Forest to this day, usually described as floating above the ground and ignoring witnesses completely, simply wandering around as if she is looking for something, perhaps her family or maybe the bandits who killed them. Although the White Witch seems to be innocuous and is not typically considered to be a sinister presence, she has the unsettling habit of appearing along roadways at times, in particular along Quest Haven Road, causing automobile accidents when she startles drivers. Indeed, many of the car crashes that happen in the Elfin Forest area have been blamed on the White Witch, and she has become entrenched in local lore.

Right nearby the White Witch’s favorite haunt is the abandoned ruins of a large building sitting in the rough behind rusted gates in 640 acres of wilderness called Questhaven, which sits right up against Elfin Forest. The building is not much more than some crumbling foundations, but it is said to have once been an insane asylum where patients were frequently tortured and died. The paranormal stories surrounding this place and its surrounding area are diverse. Everything from the apparitions of former patients, ghosts of Native Americans hanging from trees, roving black hellhounds with glowing eyes, and even a giant 10-foot-tall white owl have been reported from here, making it by far one of the most haunted areas of all. However, much of Questhaven is now private land owned by a non-denominational religious retreat, called the Questhaven Retreat, Church of the Holy Quest, making investigations difficult. This has not stopped trespassing thrill seekers from entering and coming back with all kinds of wild tales. Considering that records show there was never an insane asylum here, it is easy to assume this aspect of the tale is just an urban legend, but the land of Questhaven seems to be haunted nevertheless.

Most of these are probably urban legends that have sprouted out of the undeniable eeriness of this place. Yet, what if there is anything to them? What could we be dealing with here and why should this place draw to it such an intensity of such stories? Whatever the answers to such questions may be, walking through these woods it is hard not to imagine there is something perhaps lurking out past the trees, and the Elfin Forest remains a perplexing unexplained mystery.

When Bigfoot, UFOs and Aliens Clash: The Elephant in the Room