Lying out in the grey, storm lashed seas of the southernmost point of the Nova Scotia peninsula, Canada, is Cape Sable Island. The region is known for its strange phenomena, notably the “Shag Harbor UFO Incident,” and it is also known for its many shipwrecks over the centuries, with the frequent fog and storms that pass through being responsible for a number of them, many unexplained. Yet, while poor weather conditions and treacherous rocks are likely the major cause of most of the many shipwrecks here, there have long been tales that these murky waters may be the home to a particularly vicious breed of sea serpent that may have been responsible for at least some of them.

There have long been sea serpent sightings in the area, and some of these have been rather harrowing. In 1943 there were some fishermen who claimed that their vessel had been chased by a sea monster, and there have been several tales of crews claiming to have been attacked by something mysterious in the murky waters here. The creature is typically described as being over 50 feet long, with a head “like a wild boar,” a mouthful of tusks or fangs, protruding snail-like eyes, a frill on the back, and a vertical, segmented tail, the whole of it often said to be encrusted with barnacles. It is also said to be enormously aggressive and territorial, not appreciating boats coming into its space and making it very obvious they are not welcome. 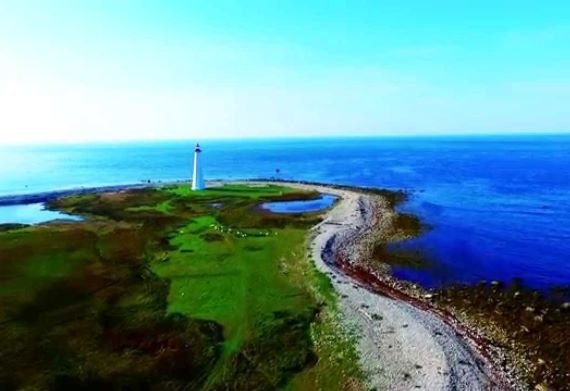 Some of the most spectacular and well-known such accounts come from the year 1976, during which at least four different vessels were allegedly attacked by a sea monster in the area over July of that year. One of these was a fisherman named Elsner Penney, who was fishing just off the coast at a place called the Pollock Shoal when he noticed a gargantuan mass slowly rising from the water and descending again not far away. He was very familiar with whales, and immediately knew that this was no whale. According to Penney, as soon as it became aware of him it began lumbering threateningly towards his vessel, and he would say of it:

He would claim that he was sure the thing had been acting in a threatening manner, and that he had opened up his boat to full throttle to get out of there, the thing hot on his heels. He was allegedly only able to shake it when he took the risk of going towards the shallow waters of a place called the Horse Race, where the depth is only two or three fathoms deep. This apparently worked, and the massive creature drifted off to leave him alone. Not long after this is the even more harrowing report of a fisherman named Rodney Ross, who was fishing in the very same area along with his father, Keith. The day had been a very successful one, with the two managing to haul in over 500 pounds of cod, but then the catches suddenly stopped. They went from pulling in fish one after another to absolutely nothing without warning, and it was seen as a bit weird. Rodney’s father decided to take this as a chance for a break and went below decks to have a bite to eat, and that was when Rodney had a rather odd experience when he saw something so strange that he called his father back up to the deck. He would say of this:

Everything got right quiet except for a swishing noise. I couldn’t see very far in the fog, so I kept listening and by and by seen this thing in the water. I thought it was something adrift in the water. I looked, and it was moving like a hump with big huge eyes on the top of its head. I mean huge, probably 10 inches across. not once looking at our boat and we were right there. Except for this one time. It stopped and turned and looked right at us. I could feel the hair stand up on the back of my neck. It started coming at the boat and coming and coming and coming until it was just a few feet away and it reared about 10 or 12 feet out of water and opened its mouth and there were row and rows and rows of teeth sort of like fangs or tusks. You could see its body was full of barnacles and corals and big bunches. It was probably 50 to 60 feet long. Its head was much bigger than its body.  I never seen crocodiles other than on television, but its head was sort of like that coming out of the water. Peaked at the top, with a big wide mouth. Its neck was full of things that looked like gigantic barnacles. Its eyes weren’t in sockets, but popped out of the side of its head, and it had two tusks maybe two of three feet long and four inches or so round. It was a frightening thing to see. I’ve never seen nothing like it in my life. It was like something out of this world. A very frightful thing. Dad put it in gear wide open and I looked back and it came within inches of smashing our boat. I know in my heart if it wasn’t for my father’s quick thinking, I wouldn’t be here to tell this story. He saved our lives that day. 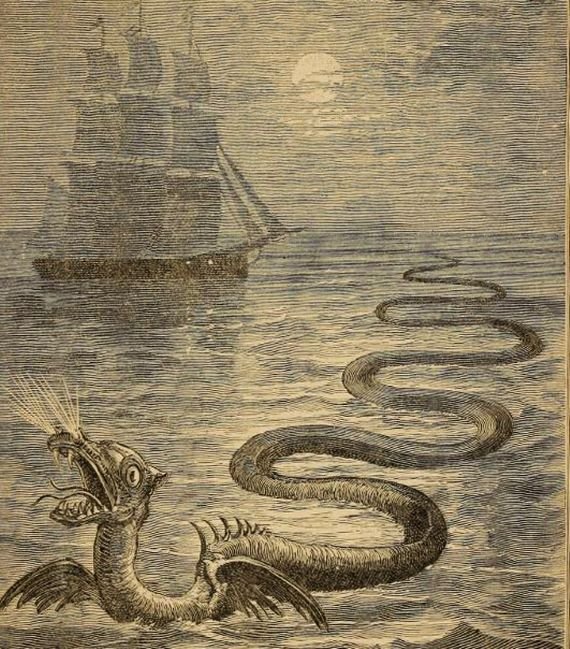 His father, Keith Ross, would also give an account of what happened, elaborating by saying:

It started coming at the boat and Rodney ran towards the cud. It didn’t hit us, but it came within a couple feet of us… It had eyes as big around as saucers and bright red-looking. I mean, you could see the red in its eyes like they were bloodshot. It had its mouth wide open and there were two big tusks — I call them tusks — that hung down from its upper jaw. It passed astern of us, so close. And we could see its body, about forty or fifty feet long with grayish, snake-like looking skin, full of lumps or bumps and barnacles. And it appeared to us to have a fish’s tail, an up-and-down tail, not flat like a whale’s. I tell you, nothing like that was ever supposed to be in those waters.

In another close encounter with the menacing creature, a fisherman and friend of Ross named Edgar Nickerson and his son Robert went fishing to the same Pollock Shoal. By this time, the rumors of the sea monster had been doing the rounds and most fishermen were too scared to go anywhere near the place, but Nickerson was skeptical, indeed he had laughed off the other reports. On this day, he was pleased that no one else was there, but his skepticism about the monster was about to evaporate. Ross would say of what happened to his friend next:

Edgar was bragging on the set, ‘I guess I got the Pollock Shoal all to myself. Everybody is scared of this fish. He no more than said it and up came this thing close to his boat. It was a scary creature.

Nickerson himself would say of the monster:

It kept coming up. At first I thought it was a whale and I kept kidding my boy that it was coming after him. I turned on my sounder. That usually scares whales away, but not this thing. It kept coming and coming. It was a horrible thing. I tell you, if there’s a devil that was it.

What are we to make of such encounters? Was there some sort of misidentification made here, and if so, how could such seasoned seamen do such a thing? Or is there perhaps a very aggressive and grumpy type of sea monster lurking about the area, for whatever reasons terrorizing ships and maybe even causing some of the many shipwrecks that dot the area? There is no way to really know, but such accounts are certainly bizarre and worth thinking about.