Over the decades, numerous people in the UFO field have become the subjects of government files. And no, that's not a case of being paranoid. Dozens upon dozens of well-known people in the UFO scene really have had their lives scrutinized, and all in the name of little green men. Well, not quite. Yes, the files do exist. But, the reasons for why such dossiers have been put together might surprise you. Indeed, most of the people in the subject have been watched because of something far more inflammatory than aliens: politics. Take the most controversial Contactee of all, George Adamski. He claimed to have had meetings out in the wilds of California with peace-loving ETs. He even claimed flights in Flying Saucers. Yeah, right. And, his FBI file runs to hundreds of pages. And I'm not kidding. The FBI, however, wasn't particularly bothered about Adamski's claims of extraterrestrial contact. What the Bureau was concerned about , however, was his politics. In the early 1950s, in his usually packed lectures, Adamski said that communism was the way of the future and that Russia could destroy the West, if it chose to. The fact that all of this was influencing the minds of hundreds upon hundreds of gullible people was of deep concern to the FBI. Hence, the reason why the "Adamski file" was opened.

Likewise, fellow Contactee George Van Tassel had a lengthy file opened on him. It ran to 319 pages. Again, the Bureau cared not a bit about Van Tassel's alleged alien contacts. They were very interested, though, in Van Tassel's words on American politics, religion, the U.S. government, the economy and more. For years, literally thousands upon thousands of people headed out to Giant Rock, California to hear Van Tassel talk. And the FBI listened carefully. Now, onto George Hunt Williamson. Certainly, he was a well-known figure in the world of the Contactees and the Space Brothers. And, an FBI file was opened on the man. The reason? Nothing to do with aliens. The primary reason why Williamson had a file on him was because he was suspected of smuggling ancient artifacts over the Mexico border and into the United States. Something like that is all but guaranteed to ensure a file will be opened on you. For a while the FBI deeply pondered on whether or not they should get further involved in the pursuit of a potential crime that had occurred outside of its jurisdiction and in another country – Mexico – but finally dropped the matter; rather fortunately, it must be said, for Williamson.

Now, let's jump forward almost half a century after the antics of the "Three Georges." Certain people in Ufology laughed and were highly skeptical when, in 2006, I wrote a book called On the Trail of the Saucer Spies, in which I mentioned how a retired British police source told me that, back in the 1990s, the British Police Force's Special Branch opened files on two UFO researchers in the UK, namely Matthew Williams and Robin Cole. Those same certain people should have kept their mouths firmly shut. The files on Cole and Williams (or, rather, some of the files; others still remain classified to this day) were finally officially released in 2012, showing that Special Branch was indeed watching both men, demonstrating that the data provided to me years ago was accurate. When, in 2012, the documents were declassified, the National Archives prepared the following statement concerning their contents: 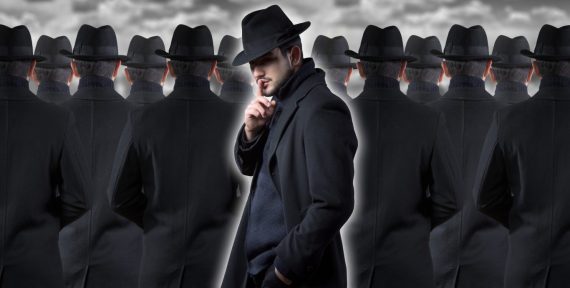 "File DEFE 24/1984/1 (p294) contains a 1996 Parliamentary Question from Martin Redmond MP asking on how many occasions MI6 and GCHQ have monitored UFO investigations. This was interpreted to mean 'have the agencies been keeping watch on UFOlogists.' A background briefing says 'neither agency in fact undertakes such activity, though GCHQ cannot rule out the possibility' they had monitored 'in other contexts individuals who have made a study of UFOs'. The MP was told the government do not comment on the intelligence and security agencies (p298). File DEFE 24/1987/1 (p262-65) reveals that in 1997 Special Branch took an interest in a UFOlogist who became obsessed with rumours of a secret UFO facility beneath RAF Rudloe Manor in Wiltshire. The base had become known as the British equivalent of the secret US military airbase 'Area 51' among conspiracy theorists. An internal note said 'Special Branch…do not believe he poses a specific threat to security, but they are alert to the risk that others may use him as a conduit for their activities.'"

Well, since the summary failed to note the names of the people in question, I will. They were, of course, Cole and Williams - as I had been told during the course of writing On the Trail of the Saucer Spies. Back in 1997, Robin Cole, of Cheltenham, England - the home to GCHQ (the Government Communications Headquarters) - wrote a fascinating report on the agency's involvement in the UFO phenomenon. And, for those who may not be aware, GCHQ is the UK equivalent of the US National Security Agency. After Cole's report was published, he was visited by two representatives of the UK's Special Branch. And since the pair announced their visit in advance (via a phone-call), Robin had the good sense to clandestinely and quickly set up his tape-recorder in his living-room and taped the entire conversation, much of which revolved around Special Branch's interest in a UFO researcher and Crop Circle maker named Matthew Williams - who just happens to be the "UFOlogist who became obsessed" with RAF Rudloe Manor, as referenced by National Archives staff above. Special Branch's concerns that both the UFO controversy and the people that investigate it could be used as tools of manipulation by hostile groups with controversial, political agendas.

Since the 1950s, files have been opened on Ufologists. On every occasion, though, UFOs were shown not to have been the primary cause for concern on the part of government agencies. But, politics, in particular, was. In all likelihood, it still is.