The Strange Saga of the Men in Black of Loch Ness

One of the lesser known aspects of the Loch Ness mystery is the fact that it's not just strange creatures that have been seen at Loch Ness. There's also a connection to the loch and nothing less than the Men in Black of Ufology. It may sound strange, but there are a number of reports that go to show the MIB have lurked around the loch - and for many years, too. It was halfway through 1968 when one Alistair Baxter - who had a deep interest in the issue of the Loch Ness Monsters - had an encounter of absolutely bizarre proportions. Like many people who pay a visit to the legendary loch, Baxter took a camera and a pair of binoculars with him. By Baxter's own admission, he never did see any evidence of the Loch Ness Monsters - and despite having been in the area for a significant number of weeks. Day and night, the monsters eluded him on every occasion possible. Admittedly, Baxter did his best, though. Unfortunately, his best was just not enough. Now, we come to the weirdest part of Baxter's time spent at Loch Ness. And, it had nothing to do with the Nessies, but everything to do with one of the most macabre and legendary aspects of the UFO subject: none other than the aforementioned Men in Black. 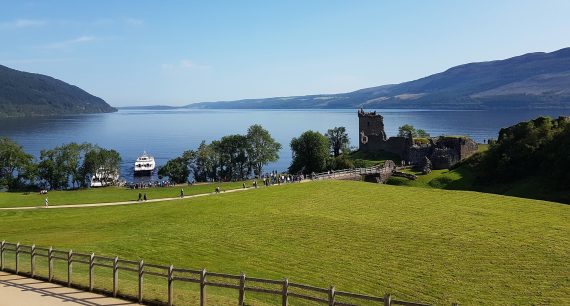 It all began in the early hours of the morning, and well into Baxter's vacation, when he was jolted awake by two things: one was a deep humming noise and the other was the sight of a small, ball of light. It was roughly the size of a soccer ball and slowly moving through the trees. And it was bobbing up and down around those same trees where Baxter had made his home for a while. Before Baxter barely had the opportunity to figure out what was going on, the ball of light soared into the starlit heavens and briefly hovered over the loch. It was gone in seconds. That the humming sound was gone, too, suggested to Baxter that the noise was coming from that strange ball of light. Most people would probably stay awake after seeing such an amazing phenomenon. Oddly, however, Baxter was overwhelmed by a need to sleep. That's exactly what he did. Things weren't over, though.

It wasn't long before breakfast that something else just as weird happened - but in a very different way. A trio of men, all dressed in black suits, approached Baxter and asked him if he had seen anything strange the night before. Feeling uneasy, and getting a strange vibe from the man who asked the question, Baxter said that, no, he hadn't seen anything strange, at all. The same MIB gave Baxter a "strange smile," adding that: "We might return." Baxter simply sat there, somewhat unsettled, and watched as the well-dressed trio vanished into the trees and were gone. They did not return. Things were still not over, though. For no less than three nights afterwards, Baxter had the very same dream. Or, rather the very same nightmare. It was of a tall Bigfoot-like beast that paced outside of Baxter's tent and that then headed down to the shores of the loch, whereupon, under a star-lit sky, it tilted its head back, wailed loudly and stared at the ink-black water. The nightmare always ended the same way: with a vision of a gigantic, nuclear "mushroom" cloud exploding in the distance and the beginning of a Third World War and the end of our civilization. As strange as Baxter's story certainly was, it was not alone. Others have seen Men in Black at the loch. One case goes back more than a century.

Of equal fascination – and of deep relevance to this story – way back in September 1866 there occurred the sighting of a mournful-looking man in black attire on hills near Lochindorb, which is only roughly 50 miles from Loch Ness. He was seen – by a terrified farmer – strapped to the back of a large, fiendish dog that was prowling the same hills. The farmer didn’t wait around to see what might happen next. He fled the hills for the safety of his home, fearful that the thing was a shape-shifting Kelpie that might wish to make him its next victim. It was probably a very wise move. Can it be mere coincidence that two encounters involving Men in Black – separated by a time-span of more than 100 years, it should be noted – both had Man in Black components attached to them? I strongly suggest that no, it cannot be a coincidence. And, there's a third case, too. And, there's a third case, too. It revolves around F.W. "Ted" Holiday, a man who spent near-endless time at Loch Ness in the 1960s and 1970s and whose books included The Orm of Loch Ness, The Dragon and the Disc, Sea Trout: How to Catch Them, Fishing in Wales, and The Goblin Universe. On the night of June 2, 1973, Loch Ness played host to something truly extraordinary. It was nothing less than a full-blown exorcism, one that was designed to forever banish the malignant monsters from the deep and dark waters. It was all the work of Donald Omand, both a doctor and a reverend. He was a man who had substantial knowledge on, and experience of, the domain of all things supernatural. Along with Omand, among others, was Ted Holiday.

As dawn broke on the following morning, Holiday took a walk down to the loch. What a catastrophic mistake that was. As he did so, Holiday could not fail to see a man, at a distance of around ninety feet, standing atop the slope that led directly down to Loch Ness. This was no normal man, however. It may not even have been a man, at all. Whoever – or whatever – this curious character was, he was dressed entirely in black, from head to toe. Whereas most people who go to Loch Ness focus their attentions on the deep waters, in the hope they just might be lucky enough to see something monstrous rear its head, this character had his back to the loch and was staring directly at Holiday, who later commented that as the figure focused on him, "I felt a strong sensation of malevolence, cold and passionless."

The man appeared to be dressed in what Holiday described as black plastic. His hands were gloved (black, too), and his head was covered by something that looked like a motorcycle helmet. No surprises on its color. Goggles covered his eyes, and even his nose and mouth were covered – by a black band, possibly made of cloth. Holiday tentatively walked towards the definitive Man in Black. Even when Holiday was mere feet away, the MIB neither moved nor acknowledged his presence. Most terrifying of all, there appeared to be no eyes behind the goggles. Shocked, Holiday continued walking for about ten feet and then stopped. It was Holiday’s quickly thought out intention to pretend to fall on the grass and reach out to the man for support as he did so – specifically to see if he was physical in form, or some kind of intangible specter. Holiday was prevented from doing so, however, when the sounds of whistling and unintelligible whispering filled the air, and the MIB vanished – as in dematerialized, literally. As Holiday – now petrified out of his wits – shakily scanned the half a mile of open road that dominated the landscape, it became clear to him that there was simply no way the man could have made good a stealthy escape in conventional fashion. Stunned to his core, Holiday tried to reconcile the whole thing as nothing but a bizarre hallucination – a theory that, he knew deep down, simply wasn’t viable.

Bones May Show First Humans Arrived in North America by Boat 33,000 Years Ago