It is hard to get a lock on the true beginning of the UFO craze in the United States, but there are some old standbys. The Kenneth Arnold sighting of 1947 often crops up, as of course does the supposed UFO crash at Roswell, New Mexico that same year. These are the cases that launched the UFO phenomena into the mainstream consciousness and started the whole "flying saucer" fad, but there have been sightings and incidents going back well beyond these commonly held milestones. Indeed, the earlier UFO reports from America predate Arnold or Roswell by quite a good margin, and have served to carve out their own bizarre corner of the UFO landscape.

In 1628, the English Puritan settlers of the New World established the Massachusetts Bay Colony, which was the second major settlement in New England following the Plymouth Colony. A very important figure at the time was a lawyer named John Winthrop, who was in charge of a huge wave of settlers coming to America, and he would serve as the governor of the colony for 12 years starting from 1629. Winthrop would also be the founder of various other communities along Massachusetts Bay and the Charles River, and was also known as an authoritarian and religiously conservative leader, known to be against pure democracy, once calling it “the meanest and worst of all forms of government.” Despite this, he was still a well-respected leader and politician who has made his mark upon the early history of the United States, with some of his writings serving to influence politicians to this day, but a lesser-known aspect of the man is that he also wrote some pretty weird stuff in his journals, including what is thought to be among the very first UFO accounts in the New World.

Tucked away between the pages of various mundane accounts of colonial life is a very curious entry dated March 1, 1639, in which Winthrop writes of a very bizarre and outlandish  incident involving a man named James Everell, who he describes as a “discreet, sober man.” According to Winthrop, Everell had been rowing with two other men up a section of the Muddy River, about two miles from the village of Charlestown, when they saw a “great light in the sky,” which seemed to dart about back and forth. He would describe the account as follows:

When it stood still, it flamed up, and was about three yards square; when it ran, it was contracted into the figure of a swine: it ran as swift as an arrow towards Charlton [Charlestown], and so up and down about two or three hours ran as swift as an arrow, darting back and forth between them and the village of Charlestown, about two miles away. They were come down in their lighter about a mile, and, when it was over, they found themselves carried quite back against the tide to the place they came from. Diverse other credible persons saw the same light, after, about the same place.

The men claimed that after the sighting they had inexplicably found themselves transported about one mile upstream, with no idea or memory of how they had gotten there, nor any sense of the time that had passed. This is an odd detail, as it would mark this incident as not only the first report of a UFO in America, but also the first account of missing time and possibly even the first of alien abduction. One of the explanations at the time was that the men had merely seen illumination from a light phenomenon springing from swamp gas, called ignis fatuus, caused by the combustion of gas from decomposed organic matter. Others thought it was just a misidentified meteorite, and one skeptic was a man named James Savage, who added his own footnote to the sighting in a published version of Winthrop’s journal in 1839, saying:

This account of an ignis fatuus [pale light over marshy ground] may easily be believed on testimony less respectable than that which was adduced. Some operation of the devil, or other power beyond the customary agents of nature, was probably imagined by the relaters and hearers of that age, and the wonder of being carried a mile against the tide became important corroboration of the imagination. Perhaps they were wafted [carry lightly], during the two- or three-hours’ astonishment, for so moderate a distance, by the wind; but, if this suggestion be rejected, we might suppose, that the eddy, flowing always, in our rivers, contrary to the tide in the channel, rather than the meteor, carried their lighter back. 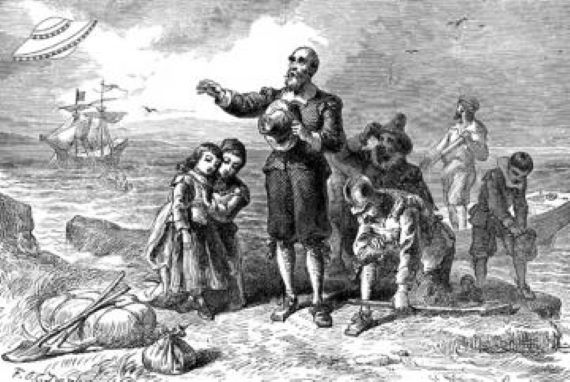 In the end, neither swamp gas nor meteorites really seem to adequately explain what the men reported as written in Winthrop’s journal, and considering that it is only mentioned in one entry and happened so long ago, we will probably never know for sure. Interestingly, this isn’t even the only weird such account to be found within Winthrop’s journals. Five years later there is another entry dated January 18, 1644, which makes mention of a light rising from the water that was witnessed by several boatmen near Boston. This light was apparently “in form like a man,” and “went at a small distance to the town, and so to the south point, and there vanished away.” A few weeks after this yet another journal entry mentions another strange report from Boston Harbor, in which Winthrop writes:

A light like the moon arose about the N.E. point in Boston, and met the former at Nottles Island, and there they closed in one, and then parted, and closed and parted diverse times, and so went over the hill in the island and vanished. Sometimes they shot out flames and sometimes sparkles. This was about eight of the clock in the evening, and was seen by many. About the same time, a voice was heard upon the water between Boston and Dorchester, calling out in a most dreadful manner, ‘Boy! Boy! Come away! Come away!’; and it suddenly shifted from one place to another a great distance, about 20 times. It was heard by diverse godly persons. About 14 days after, the same voice in the same dreadful manner was heard by others on the other side of the town towards Nottles Island.

Winthrop would muse that the voice heard was perhaps from the ghost of a sailor who had died several moths prior to the UFO sighting when his ship had exploded when gunpowder had accidentally been ignited. Whatever the case may be, it is a pretty bizarre report, and it is hard to know what might be going on here. Once again, it only appears in one entry and is never brought up again, leaving it firmly and forever in the realm of speculation. It is all quite the strange case and series of events, and we are left to try and make sense of it all. Was any of this real, and if so what was it? Or was this just a gag thrown into an important historical figure's journal, and if so, why? It is all certainly a bizarre historical oddity, which has definite repercussions on the UFO discussion and which many are not aware even exist at all.

The Planet Mars: Its Anomalies and Mysteries