The Strange Story of Wycliffe Well: The UFO Capital of Australia

Driving along the dusty stretch of the Stuart Highway between the towns of Alice Springs and Tennant Creek, in the Northern Territory, Australia, you may be held in awe by the sheer expanse of completely flat and barren sun-parched desert all around you. This is an arid realm seemingly devoid of life for large stretches, save some scattered brush and bushes, seemingly like the surface of some alien world, uninhabitable to humans. It is this sheer desolation and lack of any civilization as you meander along the bumpy, unkempt road that may cause you to be surprised to see spring up a sign that boldly states “Caution: Alien Landing Site Ahead." As you drive on you may pass another sign with a prominent alien head on it welcoming you, as well as plastic statues of aliens. Then a ramshackle collection of shacks, a tiny gas station, and a roadhouse in the middle of nowhere, adorned with murals of aliens, UFOs, and with more alien statues standing around staring at you, the whole of it sitting within this inhospitable realm of dust, dirt, and sun. Welcome to the outback settlement of Wycliffe Well, the self-proclaimed “UFO Capital of Australia.” 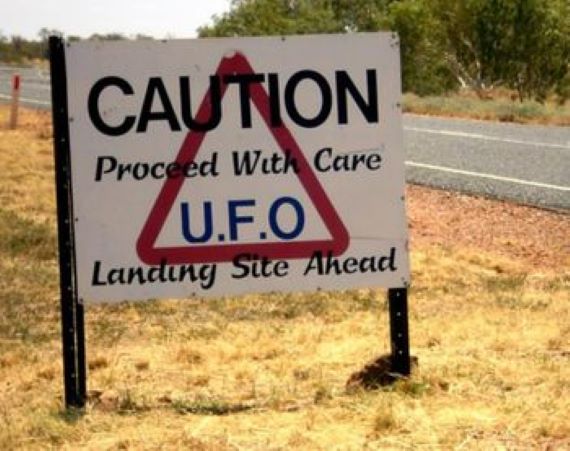 The remote, only partially inhabited roadside settlement originally began its life as a watering point along the stock route for the Overland Telegraph Line in the 1860s, going on to serves as a way-station for servicemen during World War II. During this time the area became well-known for its intense UFO activity, with soldiers reporting all manner of sightings nearly constantly. Before long, the area was attracting not only soldiers, but curiosity seekers and UFO buffs as well, who came here hoping to see strange things in the sky and for the most part rarely coming away disappointed. In the years after the war the visitors kept coming, and so a man by the name of Lew Farkas decided to capitalize on the region’s UFO craze by purchasing the local roadhouse in the 1980s to turn it into the Wycliffe Well Holiday Park. A gas station was put up, a bar installed on the premises to serve what he says is the best selection of beers found anywhere else, with about 300 different labels when fully stocked for all of those thirsty alien hunters, and the roadhouse turned into a sort of gas- food- lodging- general store- curio shop one stop shop for the many UFO nuts coming through, even setting up a campground, a large artificial lake for fishing and recreation area, a souvenir shop full of alien-themed oddities, and a sort of UFO museum with all manner of alien paraphernalia, all covering around 60 acres and creating a sort of oasis in the desert for those looking for aliens. He has said of the genesis of this strange place in an interview with Vice Magazine:

I read a journal, it might have been an American journal, that called Wycliffe the "UFO Capital of Australia." I picked up on that and went with it. Originally, Wycliffe Well was just a fuel stop. When the highway opened, I started working on the idea that rather than tourists leaving Alice Springs and just heading blindly north, they'd be heading to me. I first arrived in Wycliffe in 1985. It was supposed to be a five-year experiment but five years turned into 25. The problem being that during that time, I just kept on investing in the place. There was already UFO activity in the area. I came here to discover that tourists were coming in just to have some sort of memento for this UFO spot. That's how I started making up the souvenirs. Then, we made a mural of a UFO based on a sighting we had in the area. People would come and take a picture of that mural and nothing else. That's how we started converting everything—every wall, every bit of space in the area—to do with space, to do with aliens, to do with UFOs. It got famous very quickly and it put Wycliffe Well on the world map.

Farkas made sure that the roadhouse was as alien-themed as possible. The roadhouse features a wide array of gimmicky plastic alien statues and mannequins, UFOs made out of junk, pictures of flying saucers and aliens everywhere. There is even an impressive UFO observation deck called “Mount Wycliffe," which is built from corrugated iron nailed to the side of the machinery shed painted to look like rock and accessible by a stairway on the side. In the main lobby is a logbook for visitors to report any UFO sightings they’ve had, and it is bursting at the seams with hundreds of sightings reports and newspaper clippings of accounts from the area. Indeed, UFO reports have proven to be so frequent here that the Sun Herald newspaper and Time Magazine both ranked Wycliffe Well as one of the best spots in the world for seeing UFOs. In its heyday, it was claimed that you were more likely than not to see UFO activity here to some degree, and current owner Arc Vanderzalm has said of taking over the place and the many sightings here:

I don't know what I was thinking when I arrived. My mind was boggling. There's been four of five occasions when all the people out of the restaurant have gone out and observed something very unusual. It's never the same twice. All types of different lights, changing direction, and colourful.

The original owner, Lew Farkas, said that during his decades-long tenure at Wycliffe there were hundreds of sightings, ranging from the odd to the truly fantastical, including people claiming to have seen aliens lurking about in the desert, and there were also some odd visitors to the site as well. Farkas has said of some of his weirder experiences during his years there:

On a lot of occasions people were getting chased down the highway by lights. They would pull up and be panicking so much that they would say, "Quick give us a room, we can't stay out there." So that was good for business… It chased people away at times, but it brought customers in too. One scientist came from England. He turned up with just a briefcase. He told us when he arrived that he was coming to investigate the sightings and that he could tell if there was anything in the atmosphere without even looking. When he opened up his briefcase, it was just like an old school lab. All these things would just fold out: little things zipping around, glass tubes, electronics. I don't know how it worked, but he left happy. 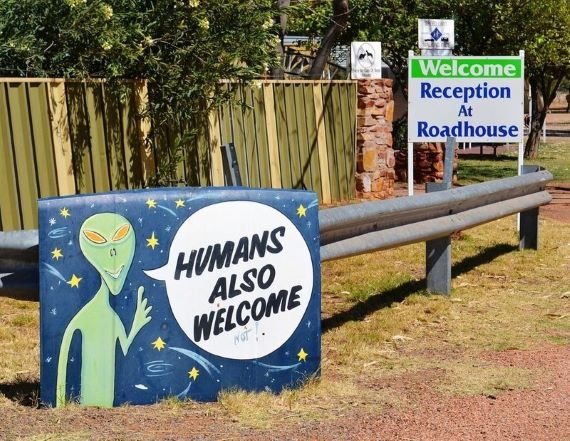 The establishment has only a few permanent residents, but this little oddity out in the middle of nowhere still manages to pull in droves of visitors all the time. We are left to wonder just why this place should boast such nonstop UFO activity, and there have been plenty of theories, including that it is just headlights in the distance viewed over the flat landscape, misidentified planes, some sort of atmospheric or geological phenomenon, or of course actual alien spaceships. If these are truly alien UFOs, then what would draw them so heavily to this spot? Is it just the remoteness away from prying eyes? Is there some sort of base there? Perhaps it is a feature of the landscape or geology here that attracts them? Farkas has his own ideas, saying of it to Unexplained Australia:

Scientists say the sky is full of Ley Lines, which act like highways for the UFO’s to travel along. But these energy lines must meet somewhere and one of those crossroads or intersections lies directly above the middle of Australia. That’s why we see so many here.

What is going on here? Is there anything to this, or is it all just a cheesy marketing scheme? People continue to swear that they have come across UFOs here in this remote oasis of weirdness far from civilization, so it is hard to say. Whether there are any aliens and spaceships here or not, it is all a rather odd and wild ride, as well as an incredibly weird and yet undoubtedly charming roadside attraction in the badlands of Australia, perhaps worth checking out if you are ever passing through.

The British Bigfoot: Guardians of Ancient Sites? They Just Might Be