The Strange Vanishing of Kristi Krebs

In 1990, 22-year-old Kristi Krebs seemed to be doing alright for herself. She had a job at a local restaurant in Fort Bragg, California, and was described by family, friends, and co-workers as cheerful, friendly, and optimistic. She had no history of mental health problems and was not a sullen or depressed person at all. Yet, shortly after starting work at her new job at the restaurant her entire demeanor would change. She started to daydream constantly, and it would soon become apparent that she had become obsessed with a married man she worked with. According to her friends, she was absolutely infatuated, constantly daydreaming and thinking about him, and although it is not known how much of an effect this had on what was to come, Kristi’s life was about to get very strange, spiraling into obsession, bizarre behavior, and ultimately a weird disappearance that has never been solved.

On April 30, 1990, Kristi got into her car to go take a drive, and at some point ended up on a lonely rural road, where her car apparently got stuck in mud and somehow had caught fire. The car would be reported to police by a passing motorist, and when it was examined it had been completely gutted by flames. Authorities expected the worse, thinking they'd find someone dead inside, but Kristi was nowhere to be seen and there were no human remains at all. It would not be until the following day that any sign of the missing woman would turn up, when some railroad workers saw her aimlessly wandering alone in some sort of zombie-like trance. When her parents came to pick her up, she was still disoriented and in this daze, and she displayed some very strange and uncharacteristic behavior. Kristi’s father, Bob Krebs would say of this:

Initially, we thought things were o.k. But as we were driving back into town, the behavior we were getting from her was very bizarre, chanting and doing very weird things. And I looked at my wife and said, ‘We’re not going home. We’re going to the hospital.' At first they thought she might have been on drugs, but they were able to test her and see that there were no drugs in her system.

The main theory was that Kristi had intentionally crashed her car and set it on fire during some sort of psychotic break, possibly due to the trauma of her obsession with the married man, and she would spend the next 6 months undergoing intense therapy and drug treatment for emotional issues. She actually made good progress, seeming to return somewhat to her old self, and so she was released from the hospital to go back to work. In fact, she ended up working nearly constantly, taking two jobs and working 10 to 12 hours a day, but despite her parents’ worries she insisted she was fine and that the work was cathartic for her. On August 9, 1993, she was described as being in good spirits, back to her old cheerful self, so when she left her job at a pizza joint that evening no one would have had any reason to suspect that dark clouds were looming. After leaving work, she was seen at a nearby public beach, where she was told to leave by a park ranger. She got into her car and drove off, apparently going on to drive off right off the face of the earth.

The following day, Kristi’s car was found abandoned in a shallow creek in MacKerricher State Park, an isolated area of redwood forest just east of Mendocino, California, and eerily only around 7 miles from where she had crashed her car 3 years earlier. Kristi’s wallet and driver’s license had been left behind, and oddly in the backseat were found her bra, panties, and her work clothes neatly folded and sopping wet. She might have wandered off into the forest wearing pink shorts and a white top, which were the gym clothes she was known to carry around with her and which she likely had had in the car with her. There were other oddities as well. Strewn about in the car and around it were photographs and identification papers that had been torn up and scattered about, and for some reason the car radio had been removed and was missing. More ominous were the small traces of blood on the dashboard and the front seat, which did not indicate a major injury but were still unsettling. Where had she gone and why had she ended up in the redwood forest? What was the meaning of the torn up papers and the clothes and missing radio? Kristi’s father would speculate on what had happened to his daughter out there:

I think that she probably had flashbacks. It was like reliving that nightmare. And all of that, I think, just overloaded all the circuits. In my mind, the last thing she did, she went through her wallet in total frustration, whether she’s looking at pictures of family and friends, she ripped them up and scattered them around. Whether she was destroying her past and trying to get away from it, I really don’t know. 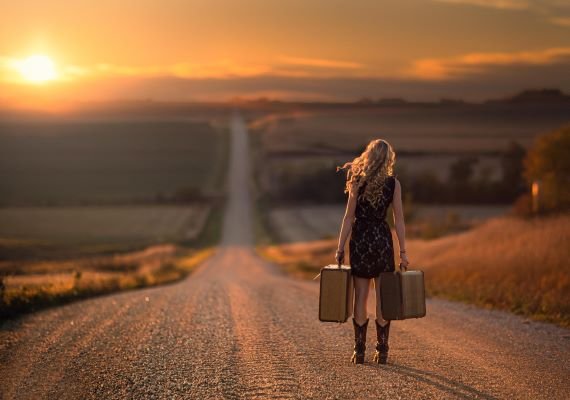 A massive search was launched for the missing woman, and in the meantime, mysterious alleged sightings of her began to come in, usually describing her as hitchhiking and with several people claiming to have actually given her a ride. A very credible such report was made by an off-duty highway worker named Mike Case, who says that on June 30, 1994, he picked up a woman who strongly resembled Kristi Krebs just outside the farming town of Visalia, California, a full 300 miles from where she had gone missing. Case would say of the young woman he picked up:

At first, I thought possibly she was on some type of drugs. But talking with her a little bit at the beginning, I knew that possibly she was in a world of her own. I did happen to notice that there were two slash marks on her wrist. And I asked her directly, ‘Well, what happened there?’ And she said, ‘I had a breakdown.'

It would not be until a week later that he would see an article on the disappearance and realize who it had been, and Case is convinced the woman he picked up was Kristi Krebs. Sightings would continue to come in from California, Texas, and Salt Lake City, although none of these would lead anywhere. One very compelling report came from a woman who claimed to have given a ride to a woman who matched Kristi’s description in Salt Lake City just two days after the disappearance, complete with the pink shorts and white top. The witness claimed that the mystery woman introduced herself as “Kris,” and told her that she was “the happiest woman in the world” and that she was being chased by police, as well as spinning a yarn about how she was off to marry a trucker she had met. This particular sighting was very promising, because the witness had driven with her for a half an hour to Park City, and so was able to go into great detail on Kristi’s mannerisms and behavior. Kristi’s mother, Susan Krebs, would say of this sighting:

She told us about conversations and mannerisms that were completely credible, that anyone who knew Kristi would recognize. This is the only positive sighting we have had of Kristi, but we know she hitchhiked out of Fort Bragg and made it to Salt Lake City in a very happy, though delusional, state. She felt she couldn’t come home because her family would be in danger.

Nevertheless, even this promising lead didn’t ultimately lead anywhere. The case of Kristi Krebs has gone completely cold, and there have been no further leads or clues. What happened to this poor young woman? Was this foul play, and if so, by who? Did she just have a psychotic break again, and if so, where did she go? Or did she simply choose to go off to live another life for whatever reasons? The many sightings of her seem to hint that she is still alive, and her family would like to think so, so is she just hovering out on the periphery, lost in a world that no one understands? Whatever the case may be, the case of Kristi Krebs remains unsolved and just as mysterious as ever.