Underwater UFOs, Sea Monsters, and the Start of the Vietnam War

The Vietnam War, also known as the Second Indochina War, was fought between the years of 1955 and 1975, officially between North Vietnam and South Vietnam, but as most know America was pulled into it starting from 1964. The catalyst for America’s entry into the war revolves around a mysterious and disputed incident that happened in early August 1964 in the Gulf of Tonkin, also known as the USS Maddox Incident, in which a U.S. destroyer was said to have been put under attack by with North Vietnamese fast attack craft. It would help serve to force the U.S. Congress to pass the Gulf of Tonkin Resolution and give President Lyndon B. Johnson great authority to increase American military presence in Vietnam. This would result in a horrific trial of attrition in the jungles of Vietnam that would see an estimated 58,220 U.S. service members killed in the conflict and a further 1,626 remain missing in action by the time they pulled out in 1973, but what really happened during this initial incident has long been wrapped in mystery and controversy, and one of the weirder ideas is that this might have been the doing of underwater UFOs, also called USOs (Underwater Submersible Objects) or even mysterious sea beasts.

The official version of the Gulf of Tonkin incident is that on August 2, 1964, the American destroyer the USS Maddox had been out  performing a signals intelligence patrol as part of DESOTO operations when they were aggressively approached by three North Vietnamese Navy torpedo boats. In the ensuing melee, the USS Maddox was assailed by machine gun fire and torpedoes, and when the smoke cleared one U.S. aircraft was damaged, three North Vietnamese torpedo boats were damaged, and four North Vietnamese sailors were killed. This first attack is not in dispute, but there would then be an alleged second incident on August 4, 1964 that would really rile the Americans up, this time involving the USS Maddox and another destroyer called the USS Turner Joy, and which furthered the U.S. resolve to enter the conflict, but there has long been some amount of doubt that the US forces had ever been under fire at all, or whether this had just been an excuse to escalate the efforts to enter the war.

The North Vietnamese immediately denied that a second attack had ever happened, and in later years former United States Secretary of Defense Robert S. McNamara also admitted that there was never any second attack. Indeed, it was found that there were not even any North Vietnamese vessels in the area during the August 4 incident, but personnel aboard both the USS Turner Joy and USS Maddox begged to differ, insisting that it had happened, so what was going on here? According to some testimony from aboard the vessels involved, some pretty weird stuff.

In 1966, a Navy sonar engineer assigned to the destroyer USS Turner Joy came forward with a rather odd version of the events of that day. He claimed that on the day of that supposed second Gulf of Tonkin attack, he had picked up signatures on his radar that appeared to be enemy torpedoes, but which behaved erratically and as if under intelligent control, approaching the ship, even going under it, only to dart off. Both vessels reported detecting small, fast-moving objects on radar, both above and below the surface, which they took to be torpedoes and torpedo boats, but visibility was low due to a storm that had brought heavy clouds and fog. There would apparently by over 20 signatures of torpedoes on sonar, but they did not behave like torpedoes, seeming to move about at will rather than a straight line, and none of them actually hit. Some frightened crew members reported that the torpedoes seemed to be illuminated, while others swore they had seen the cockpit lights of the enemy vessels out in the gloom. Others saw what they took to be the wakes of torpedoes and there were even strange sounds heard that sounded a lot like the propellers of torpedoes, yet no impacts ever occurred.

Taking no chances at all, the two American destroyers allegedly performed evasive maneuvers and unloaded almost 650 cannon shells and several depth charges, blowing the area to absolute hell, yet when the smoke cleared there were found to be no enemy vessels, no wreckage or debris, nothing. This was despite the accounts of crew aboard the destroyers who were adamant that there had definitely been something out there and that they had been under attack. At the time it was convincing enough to propel America full on into the war, only in later years being found to have been perhaps a phantom attack that had no evidence of ever having happened at all. In 2005, the National Security Agency would declassify a trove of documents that revealed there was no second Gulf of Tonkin attack, and the at the time U.S. Secretary of Defense, Robert McNamara himself would concede that there had been no enemy attack on that day. Even then president Johnson would say “For all I know, our navy was shooting at whales out there.” 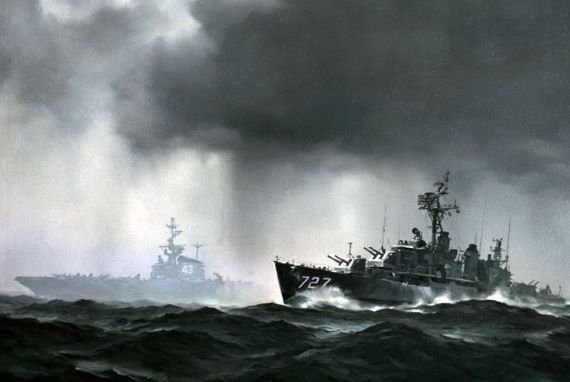 Despite this, crew members aboard the two destroyers have continued to insist that there was something out there menacing them, leading to all sorts of theories. One of the main ideas is that a combination of weather, schools of fish near the surface, birds, or sensor problems had all conspired to make them misidentify phantom targets as actual ones. Another idea is that these ships were being circled by USOs, or underwater UFOs, and just as strange is the idea that the signatures and sightings were caused by underwater creatures. Todd Newberry, a professor emeritus of marine biology at the University of California, Santa Cruz, believes that this can be blamed on bioluminescent cousins of sea squirts called giant pyrosomes, which are basically massive colonies of filter-feeding organisms that form long blunt-ended tubes that can propel themselves along and reach up to 60 feet in length. They also tend to light up when disturbed, and the idea here is that the crews of these ships were freaked by these giant, decidedly torpedo shaped colonies of organisms shooting about. Newberry has said of this:

These things are the size of torpedoes, so they produce the same sonar image. It all fit together, as far as the character of the colony and its behavior. They could certainly have shown up on sonar. I can totally see that if you didn’t know that something like them exist and you were looking at them in the water, your imagination could go pretty crazy with what you were seeing. Imagine telling your commander who thinks you’re being attacked by torpedoes, ‘No sir, those are Pyrosoma!’ You’d be put in the brig immediately. Here’s an angle that was never picked up at the time. It could be a perfectly natural phenomenon. It was a misunderstanding by people who had never heard of pyrosomes. It’s an irresistible story to bring up.

Whatever the case may be, this alleged second Gulf of Tonkin attack is undeniably one of the reasons America entered the Vietnam conflict. Was this just propaganda spun by a government eager to staunch the spread of communism? Or was it something else? What happened to those men out there? What were they picking up and even seeing zipping around out there in those dark waters? Was this all just a misunderstanding, USOs, sea creatures, or something even more mysterious still? Whatever the answers to these questions, it all had heavy weight on the history of war, and remains a curious historical oddity that has never seen any real concrete answers, leaving it to the realm of speculation.

From Folklore to Footprints: Ivan Sanderson and Bigfoot at Bluff Creek