Unidentified Billionaire Object? Jeff Bezos Will Fly Into Space in July on His Own Ship

Sir Richard Branson may be the billionaire trying to get into space the longest, while there’s no question Elon Musk is the most successful billionaire space entrepreneur. Dennis Tito was the first billionaire space tourist in 2001, paying his own way to an eight-day stay at the International Space Station, but his vehicle was a Russian Soyuz capsule. As of this writing, no billionaire has flown his or her own ship into space. That may change on July 20th, when Amazon billionaire Jeff Bezos is scheduled to fly on the first crewed flight of the New Shepard suborbital vehicle built by his space company, Blue Origin. Does that date ring a bell?

"Ever since I was five years old, I've dreamed of traveling to space. On July 20th, I will take that journey with my brother. The greatest adventure, with my best friend."

MacKenzie Scott is probably glad she’s now the billionaire ex-wife of Bezos and not his best friend anymore, while Amazon’s lawyers and stockholders are undoubtedly happy Bezos will retire as CEO two weeks before the flight. Did you guess the significance of the date? Here’s hint – Bezos will be taking one small step for a billionaire, one giant leap for space tourism. That’s right – it’s the 52nd anniversary of the Apollo 11 astronauts setting foot on the Moon. Bezos won’t need eight days to complete the trip – the flight, from takeoff from Blue Origin's West Texas base to parachute landing in the West Texas desert, will take all of 11 minutes.

"To see the Earth from space, it changes you. It's an adventure. It's a big deal for me."

Of course, it is … even if it’s just 11 minutes. The Bezos brothers will be joined in the six-person capsule by the winner of a million-dollar auction for the third seat plus a crew – which will not include a pilot because the New Shepard is pilotless. That’s right -- New Shepard will reach an altitude of more than 340,000 feet (more than 100 km), considered the boundary of space, where it will spend a few minutes in zero gravity while the passengers gaze out the windows (or wipe the vomit off of them) before free-falling back down until the parachutes open for a soft landing. Meanwhile, the rocket booster will have already landed on a concrete pad. 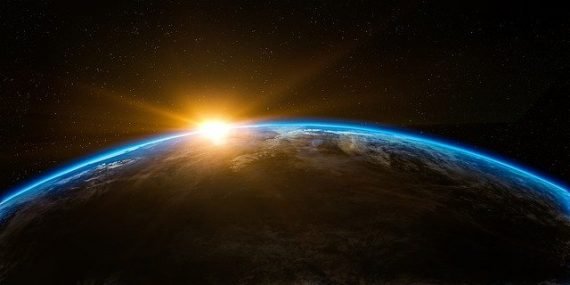 Even if Musk or Branson don’t agree, Bezos’ flight into space will be a big deal – although more on par with the flight of America’s first person in space, Alan Shepard (New Shepard is named after him), than Apollo 11. As hard as it is to fathom that Bezos went from shipping books out of his garage in 1994 to the world’s richest man in 2021, it’s even harder to believe that U.S. space travel became dominated by three billionaires so quickly.

Let’s hope that the trip is a successful one for Jeff Bezos. While we wait for July 20, here’s something to ponder – if we have been visited by extraterrestrials, are they the equivalent of billionaires on their own planets? Will the Pentagon UFO report address this?