Will Our Astronauts be Replaced by Cyborgs?

One of the biggest stumbling blocks when it comes to sending astronauts into space is the distance. Sending the Apollo 11 team to the Moon in July 1969 wasn't overly problematic for the time. The distance from the Earth to the Moon is impressive. When it comes to planning on sending astronauts to Mars, however, that is a very different thing. Mars, our nearest planetary neighbor in the Solar-System, is approximately forty million miles from the Earth and one hundred and forty two million miles from the Sun. Those are incredible distances when we compare things to a trip to the Moon. So, how might we successfully achieve a manned flight to some of the worlds in our solar-system? Well, that question brings us to one of the most controversial possibilities of all. Namely, "altering" people to allow them to be able to successfully make such an incredibly long journey.

Consider the following words of Vice: " We could modify men on Earth to prepare them for life on Mars. We could start selectively breeding men right now to have favorable generic mutations such as a need for less oxygen or higher starting bone density, increasing life spans such that a single crew could make significant headway in setting up a base on Mars. Once on Mars, our custom-made astronaut would adapt to his new life much more easily than the run-of-the-mill human."  Let's see what Gizmodo say about all of this: "Humans are built to thrive on Earth, but even a yearlong round-trip mission to Mars could pose major medical risks. If we want humans to colonize the solar system, we may have to fundamentally alter our biology and become cyborgs. That's the argument put forward by Smithsonian National Air and Space Museum senior curator Roger Launius, who believes unmodified humans won't be able to survive the unforgiving off-world environment. Between cosmic radiation, low gravity levels, and the constant threat of running out of the most basic resources like water or oxygen, the challenge might be too great for humans as they are now, which raises the question of using tactical mechanical enhancements to create cyborg colonists." 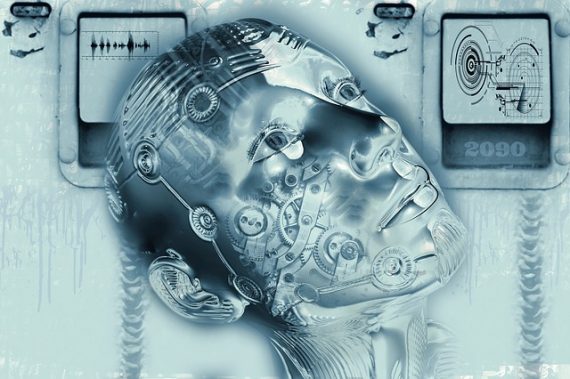 The U.K.s Daily Mail newspaper have also got into the issue of, perhaps, turning people into cyborgs: "The space environment is inherently hostile for humans. Being ill-adapted to their new habitat, the pioneer Martian explorers will have a more compelling incentive than those of us on Earth to redesign themselves. They'll harness powerful genetic and cyborg technologies that will be developed in coming decades. These techniques will be, one hopes, regulated on Earth, on prudential and ethical grounds. We should wish them good luck in modifying their progeny to adapt to alien environments. It's these space-faring adventurers, not those of us comfortably adapted to life on Earth, who will spearhead the post-human era."

Seeker gives us a great deal to think upon when it comes to the matter of humans who, one day, may not be quite human, after all: "If you've been following some of the recent developments in the world of medicine, you know that humans today can use their thoughts to manipulate machines, ]artificial limbs which interact with their nervous systems, and even use voice synthesizers to quite literally speak their mind if their ability to talk has been take away from them. Much of this technology is still experimental, but as it's proving to be effective and safe, we can use it to re-engineer the bodies of astronauts to handle the rigors of space other worlds. Basically, imagine space being explored not by people in space suits, but by cyborgs who were specially modified to cope with just about everything alien environments can throw at them."

Of course, the likelihood is that scenarios such as those presented above will take some time to take place. There are also the moral aspects: should we alter people to make incredible distances in our solar-system? Will our astronauts of the future be considered humans or cyborgs? The questions are fascinating ones. And way out ones, too.

Police Stop Exorcism in the Lumber Isle of Home Depot