A Young Earth Was Bombarded With City-Sized Asteroids

Many years ago when Earth was in its young stages, numerous asteroids hit our planet – many of which were the size of a city. It’s hard to imagine such large rocks bombarding the planet, as the asteroid that killed the dinosaurs and caused destruction to the Earth around 66 million years ago was about 6 miles across (almost 10 kilometers).

Researchers were able to determine these events by analyzing spherules which are tiny bubbles of vaporized rock that were sent flying into space during each impact but ultimately fell back down to Earth after they became solidified. These spherules were found in layers of bedrock. If the layer of spherules was thicker, it meant that a larger asteroid struck the Earth.

When the experts compared the ancient layers of spherules to modern estimates of previous impacts, they noticed significant differences as explained in the statement by Simone Marchi who is a principal scientist with the Southwest Research Institute in Boulder, Colorado, “We found that current models of Earth's early bombardment severely underestimate the number of known impacts, as recorded by spherule layers.” “The true impact flux could have been up to a factor of 10 times higher than previously thought in the period between 3.5 and 2.5 billion years ago.”

Additionally, the massive asteroid impacts could have potentially affected the planet’s ability to sustain life as well as the oxygen levels. “We find that oxygen levels would have drastically fluctuated in the period of intense impacts,” Marchi explained, adding, “Given the importance of oxygen to the Earth's development, and indeed to the development of life, its possible connection with collisions is intriguing and deserves further investigation. This is the next stage of our work.” 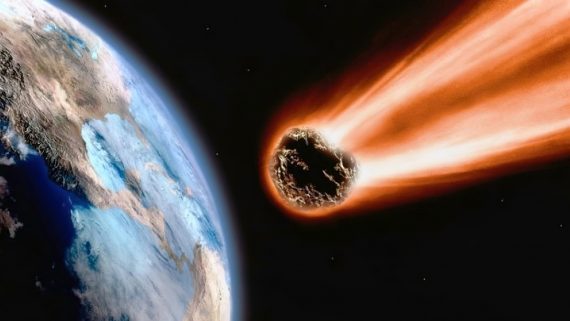 As for what type of destruction these massive impacts would have had on Earth, it is hard to know for sure but it’s highly probable that some major damage would have happened. Rosalie Tostevin, who is from the University of Cape Town but was not involved in the study (she does specialize in ancient geology), reiterated this by stating, “These large impacts would certainly have caused some disruption.” “Unfortunately, few rocks from this far back in time survive, so direct evidence for impacts, and their ecological consequences, is patchy. The model put forward by Dr. Marchi helps us to get a better feel for the number and size of collisions on the early Earth.”

It’s a good thing that we don’t have any more of these city-sized asteroids impacting Earth as the destruction they would cause today would be catastrophic.