The UFO phenomena and its alien abduction cases go way back. In the late 1800s, a strange series of events would begin to play out across the skies of the United States, in such far-flung places as of Texas, Oklahoma, Nebraska, Missouri, California and Arizona. People were seeing bizarre airships of some sort, usually described as massive, anywhere between 30 to 200 feet long and moving at speeds of roughly 135 to 150 mph, far beyond the dimensions and capabilities of anything at the time. One of the first sightings of these mysterious ships had been a mass sighting in November of 1896 at Sacramento, California, with hundreds of witnesses describing a giant cigar-shaped body with wheels at the sides, some calling it an “electric arc lamp propelled by some mysterious force,” with two human-looking figures seated upon an apparatus. Sightings would pour in after this, moving steadily eastward as far as Chicago, and it would reach peak weirdness with an alleged attempted alien abduction by the pilots of these mysterious vessels. 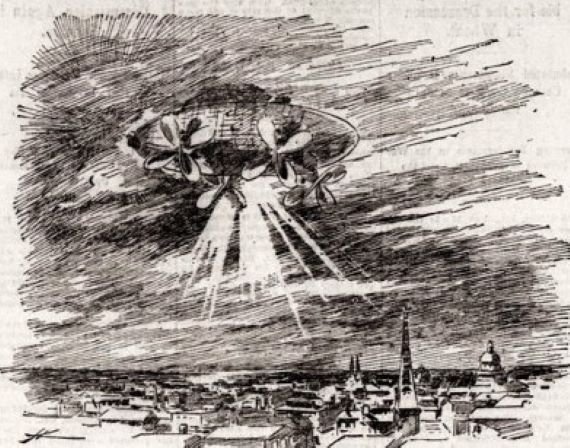 From between November 1896 and April 1897 there were thousands of reports from across a vast area of 18 states of these strange, cigar-shaped airships that resembled a flying dirigible of some sort, in some cases described as having revolving wheels, rudders, motors, sails, and a powerful beam they could project in front of them or towards the ground. In some cases, the pilots of the vessels were seen and even heard talking, although it could never be made out what they were actually saying. Some were described as having wings, others with propellers, some with no noticeable form of propulsion at all. Strange intricate machinery and contraptions were often mentioned, and all of them were completely bizarre things that no one had ever seen before, which served to sow fear in the regions where they appeared. People were truly baffled because this was an era when airships and blimps were still very rudimentary and primitive, and the Wright Brothers were years away from their flight of the Kitty Hawk. One report printed in the Quincy Morning Whig of April 1897 described a sighting at Quincy Illinois as follows:

At times it did not appear to be more than 400 or 500 feet above the ground. Men who saw the thing describe it as a long, slender body shaped like a cigar, and made of some bright metal. On either side of the hull extending outwards and upwards were what appeared to be wings. At the front end of the thing was a headlight similar to the searchlights used on steamboats.

As all of this was going on there was plenty of speculation on what was going on, ranging from the rational to the outlandish. Meteorites, Venus or other planets, stars, kites, floating Chinese lanterns, birds, and atmospheric phenomena were all mentioned, as was as pranksters and the idea that there may have been some mad inventor at work designing advanced flying machines. It got to the point that even the famous inventor Thomas Edison was questioned on his possible involvement, to which he laughed and said “I prefer to devote my time to objects which have some commercial value. At best, airships would only be toys.” Another idea was that they were aliens, “Martians” as people liked to call them at the time, and there would be at least one bizarre report that would suggest this was the case. 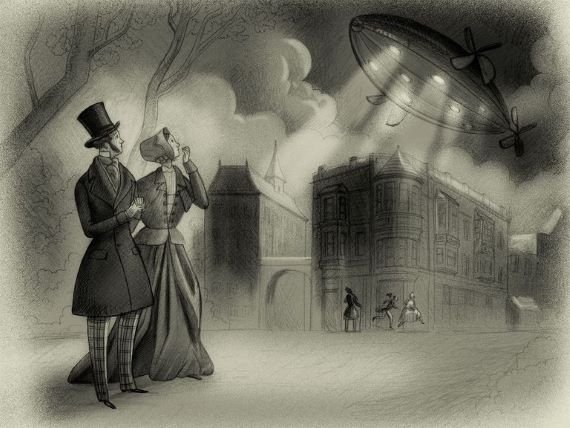 The very strange account was given in 1896, when a Colonel H.G. Shaw was travelling with a companion by the name of Camille Spooner in a horse and carriage in Lodi, California when the horse stopped in abject terror and refused to continue on. In a report on the incident in the Stockton Evening Mail of November 25th, 1896, Shaw would say of what happened next:

Looking up we beheld three strange beings. They resembled humans in many respects, but still they were not like anything I had ever seen. They were nearly or quite seven feet high and very slender. We were both somewhat startled, as you may readily imagine, and the first impulse was to drive on. The horse, however, refused to budge, and when we saw that we were being regarded more with an air of curiosity than anything else, we concluded to get out and investigate. I walked up to where the strange looking persons were and addressed them. I asked where they were from. They seemed not to understand me, but began – well, "warbling" expresses it better than talking. Their remarks, if such you would call them, were addressed to each other, and sounded like a monotonous chant, inclined to be guttural. I saw it was no use to attempt a conversation, so I satisfied myself with watching and examining them. They seemed to take great interest in ourselves, the horse and buggy, and scrutinized everything very carefully.

While they were thus engaged, I was enabled to inspect them as well. As I have already stated, they were seven feet in height and very slender. I noticed, further, that their hands were quite small and delicate, and that their fingers were without nails. Their feet, however, were nearly twice as long as those of an ordinary man, though they were narrow, and the toes were also long and slender. I noticed, too, that they were able to use their feet and toes much the same as a monkey; in fact, they appeared to have much better use of their feet than their hands. I presently discovered that this was probably a provision of nature. As one of then came close to me I reached out to touch him, and placing my hand under his elbow pressed gently upward, and lo and behold I lifted him from the ground with scarcely an effort. I should judge that the specific gravity of the creature was less than an ounce. It was then that I observed him try to grasp the earth with his toes to prevent my lifting him. You can readily understand that their slight weight made such a provision necessary, or they might be blown away.

They were without any sort of clothing, but were covered with a natural growth hard to describe; it was not hair, neither was it like feathers, but it was as soft as silk to the touch, and their skin was like velvet. Their faces and heads were without hair, the ears were very small, and the nose had the appearance of polished ivory, while the eyes were large and lustrous. The mouth, however, was small, and it seemed to me that they were without teeth. That and other things led me to believe that they neither ate nor drank, and that life was sustained by some sort of gas. Each of them had swung under the left arm a bag to which was attached a nozzle, and every little while one or the other would place the nozzle on his mouth, at which time I heard a sound of escaping gas. It was much the same sound as is produced by a person blowing up a football. From the description I give I do not want you to get the idea that these creatures were hideous. In appearance they were markedly the contrary. They were possessed of a strange and indescribable beauty. I can express myself in no other way. They were graceful to a degree, and more divinely beautiful than anything I ever beheld. 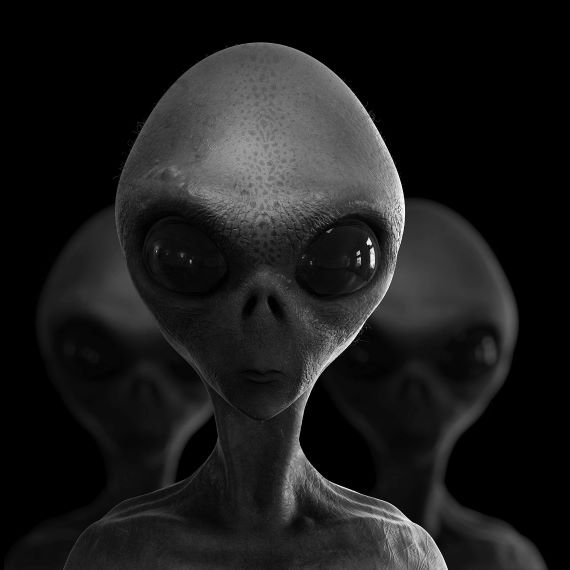 Shaw also made mention of very strange tools the creatures held, the size of a “hen’s egg,” and which could project “the most remarkable, intense and penetrating light one can imagine.” The mysterious beings apparently examined the horse and buggy with great interest, but this was apparently only the beginning of the weirdness, and it would soon escalate into what sems to have been a very early account of alien abduction. Shaw would say in the newspaper account of this:

Finally, they became tired of examining us and our horse and buggy, and then one of them, at a signal from one who appeared to be the leader, attempted to lift me, probably with the intention of carrying me away. Although I made not the slightest resistance, he could not move me, and finally the three of them tried it without the slightest success. They appeared to have no muscular power outside of being able to move their own limbs. Well, after trying in vain to move either of us they turned in the direction of the Woodbridge canal, near which we were, and as they flashed their lights towards the bridge we beheld a startling sight.

There, resting in the air about twenty feet above the water, was an immense airship. It was 150 feet in length at least, though probably not over twenty feet in diameter at the widest part. It was pointed at both ends, and outside of a large rudder there was no visible machinery. The three walked rapidly toward the ship, not as you or I walk, but with a swaying motion, their feet only touching the ground at intervals of about fifteen feet. We followed them as rapidly as possible, and reached the bridge as they were about to embark. With a little spring they rose to the machine, opened a door in the side, and disappeared within. I do not know of what the affair was built, but just before it started, I struck it with a rock and it gave no sound. It went through the air very rapidly and expanded and contracted with a muscular motion, and was soon out of sight. I have a theory, which, of course, is only a theory, that those we beheld were inhabitants of Mars, who have been sent to the earth for the purpose of securing one of its inhabitants.

What had gone on to be called the “Great Airship Mystery of 1896-97” would continue on after this, generating thousands of sightings of these aircraft but no further attempted abduction accounts, not even any detailed descriptions of the shadowy figures often reportedly standing atop them. It has all been written off as the product of some sort of collective delusion or mass hysteria, but does this really explain the myriad sightings made across many states? What are we to think of Shaw's bizarre account, and how does it fit in to the larger mystery that was going on at the time? There is no way to know, and it remains a curious and very odd historical oddity.

H.G. Wells and His Very Own New World Order