Black Helicopters and Their Multi-Tasking Pilots

Ever given thought to how long the phenomenon of the black helicopters has been around? It's a long time. A very brief document held in the National Archives of the United Kingdom references the sighting of a "little dark helicopter" seen flying over Beckenham, Kent, England in June 1957. According to the witness, he saw the helicopter around 9:45 p.m. flying silently at a low level - and in complete silence, no less. Interestingly, the witness also said that, briefly, all of the immediate area where he was standing went completely quiet. Total silence. It was as if the man was in a dream. This sounds very much like the "Oz Factor" that ufologist Jenny Randles coined a few decades ago. A few seconds later the helicopter was gone - as was the eerie silence. With that said, let's look at a number of other cases that span the decades. We'll begin with  the well-known writer Dame Rebecca West, who had an encounter with a mysterious helicopter on January 7, 1966.  She contacted the U.K. Ministry of Defense and wrote the following: "As I was going down the steep hill to the farm buildings I noticed a man walking on my property at some distance to the right of the path I was following. Presently, he reached a point when the wood stopped and there is a hedge which runs down to the valley along a sharp ridge. There is a gap in the hedge and the man stopped just past this and turned around, facing in the reverse direction, and stood still." Expressing concern about "what he was going to do," West watched in amazement as what she described as "an aerial construction" appeared out of nowhere. "One moment it was not there, the next it was," Rebecca West explained. "It seemed to come down quite rapidly, on the other side of the hedge from the man, but very close to it." And what, precisely, was it that Dame Rebecca West saw? Her description was curious, to say the least."

Stressing to the MoD that the object was "strangely shaped," she stated: ‘It consisted of something like a metal band, grey-blue in color, flattened at one point so as to seem almost leaf-like, crossed with a sort of herringbone system of metal strips.’ She elaborated further: "There was also somehow attached to these an odd object like a bag with an opening that had points, made of yellowish material. As I looked the whole thing collapsed toward the ground.  I saw it crumpling downwards, but crumpling is not quite the word. The metal band seemed to cut backwards and disappear..." West wrote that a farm laborer had informed her that he had seen a helicopter flying in the vicinity earlier on that same day. West ventured the possibility that it was "some gadget sent out by the Meteorological Office." She added: "I should put it as something [between] fifteen and twenty [feet long]." The MoD concluded, after looking at her report: "Dame Rebecca West saw a helicopter, possibly of the Bell 47 or similar type, which in conditions of poor visibility appeared to have some unusual characteristics." It has to be said, however, that the helicopter was never completely identified. Weirdest of all, West said: "There was at this time complete silence." Just like the June 1957 story.

Now, let's jump ahead and take a look at a few fascinating stories from the United States. On October 11, 1966, for example, a notable UFO encounter occurred at the Wanaque Reservoir, New Jersey. It involved a group of police officers who all had a very close encounter with a classic, saucer-shaped UFO which hovered over the reservoir for a brief period, thus allowing the astonished officers to see the craft up close and personal, before it vanished in the vicinity of nearby woods. Within minutes, half a dozen unmarked helicopters – presumed by the officers to have been military in origin – were seen flying in the direction where the UFO disappeared. Moving on: it was late on the evening September 26, 1974 when the Richley family of Lynchburg, Ohio saw a strange object high in the sky above their home. That it was stationary and appeared to be circular in shape prompted Walter Richley to hit the UFO with the beam of a large searchlight that was affixed to his truck. The UFO responded by doing likewise: the truck was bathed with an eerie, red glow. Not surprisingly, the Richley’s raced for their home and locked the doors. Things were not quite over, however. A little more than twenty-four hours later, Walter’s son, Dan, was reading in bed when he heard the unmistakable sound of rotor-blades – seemingly almost outside the window. He flung open the curtains. Sure enough, a large helicopter was in view. Not only that, it was sitting on the ground, just a short distance from the family home. Dan quickly roused his father, who later told UFO researcher Leonard Stringfield: “I think I put my light beam on something that was a military secret. That ‘copter came here to warn me. I’m not about to press it; I’d rather forget it.”

Now, it's time to take a look at the phenomenon of cattle mutilations and mysterious helicopters. The FBI reported on this subject in February 2, 1979: "For the past seven or eight years mysterious cattle mutilations have been occurring throughout the United State of New Mexico. Officer Gabe Valdez, New Mexico State Police, has been handling investigations of these mutilations within New Mexico. Information furnished to this office by Officer Valdez indicates that the animals are being shot with some type of paralyzing drug and the blood is being drawn from the animal after an injection of an anti-coagulant. It appears that in some instances the cattle's legs have been broken and helicopters without any identifying numbers have reportedly been seen in the vicinity of the mutilations. Officer Valdez theorizes that clamps are being placed on the cow’s legs and they are being lifted by helicopter to some remote area where the mutilations are taking place and then the animal is returned to its original pasture." 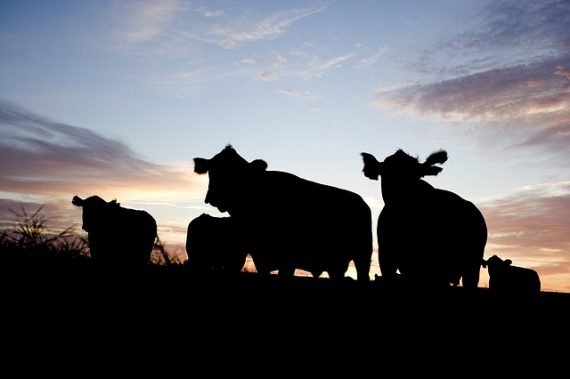 One of the most famous of all alien abductees is Betty Andreasson, whose encounters with large-eyed, diminutive extraterrestrials have been chronicled in a number of books, most notably The Andreasson Affair. For years, Andreasson and her family have been plagued by unwanted visits from black helicopters. Lawrence Fawcett and Barry Greenwood, who, in the early 1980s, spent a great deal of time addressing the many and varied intricacies of the Andreasson case, said of Betty and her husband, Bob Luca: "They reported that their home was over flown numerous times by black, unmarked helicopters of the Huey UH-1H type and that these helicopters would fly over their homes at altitudes as low as 100 feet. The Luca’s described these helicopters as being black in color, with no identifiable marking on them. They noticed that the windows were tinted black also, so that no one could see inside. During many of the over flights, Bob was able to take close to 200 photos of the helicopters."

The late Jim Keith – a conspiracy theorist who died under controversial circumstances in 1999 – was an acknowledged expert on black helicopters and someone who penned two books on the subject. He recalled one incident that demonstrated sightings of black helicopters were occurring well into the 1990s: "On May 23, 1994, at the Big Meadows on the Blue Ridge Parkway, Virginia, a citizen came upon a blocked-off road leading into the Shenandoah National Park. He observed a black chopper coming in for a landing a short distance away, and took photos of the craft. When he asked a park ranger what the black choppers were doing there, the ranger said, ‘They help us with search and rescue.' When the man pointed out to the ranger that the helicopter was equipped with a grenade launcher and added that this hardly seemed to gel with the 'search and rescue' comment, the ranger suddenly became noticeably hostile."

As to who, precisely, is overseeing all of these classified helicopter-based operations, perhaps the most likely scenario is the one that was offered to a long-time UFO investigator named Tommy Blann. In the early 1980s Blann had the opportunity to speak with a confidential, U.S. military source that was willing to share at least a limited amount of solid data on the black helicopter phenomenon. Blann said that his informant told him of "underground installations, as well as isolated areas of military reservations [that] have squadrons of unmarked helicopters, which have sophisticated instrumentation on board, that are dispatched to areas of UFO activity to monitor these craft or airlift them out of the area if one has malfunctioned."

Just maybe, Blann's source was right. After all, mysterious helicopters are still seen. In fact, I had my own encounter one afternoon in March 2018. Not only were the two, black helicopters circling above my apartment at a very low level; they had no identifying markings - at all. I took a number of photos of the helicopters, one of which you can see below. The mystery of the black helicopters is still with us. 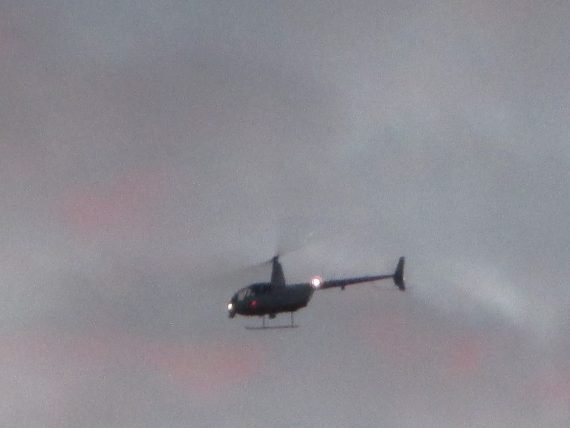