The keeper of the bucket list of billionaires in space just checked off another name today as Amazon founder and world’s richest man (even after his divorce!) Jeff Bezos lifted off from the Blue Origins space center in Texas atop a New Shephard rocket, traveled 66 miles up, spent four minutes on a parabolic path of weightless wonder gazing out the windows, and returned successfully and safely via parachute back to Earth with fellow passengers 82-year-old Wally Buck, now the world’s oldest astronaut, 18-year-old Oliver Daemon, now the world’s youngest astronaut, and Mark Bezos, now the world’s first rode-with-my-brother in space. To cap it off, the rocket also returned successfully to Earth for a soft vertical landing. The late Alan Shepard, its namesake and first American to reach suborbital space, would likely be proud. (CNBC feed of the launch and touchdown.)

“You have a very happy crew up here, I want you to know.”
Jeff Bezos during descent

At less than 11 minutes, the suborbital flight was not revolutionary in length; at 66 miles in altitude, it will be best remembered for achieving flight about 12 miles higher that billionaire Richard Branson reached less than two weeks ago. In space travel circles, it will likely best be known for setting the two oldest and youngest age records. With its more traditional rocket launch of a capsule ship and parachute landing, it’s not as versatile as Branson’s space plane, which can land on a conventional runway. However, Bezos’ flight needed no pilot onboard – it was completely controlled by computers and a ground mission control team.

Ecstatic and healthy, the crew exited the capsule approximately 11 minutes after takeoff at just after 9:30 a.m., embracing family, friends and the support crew and popping champagne before driving off into the sunrise. 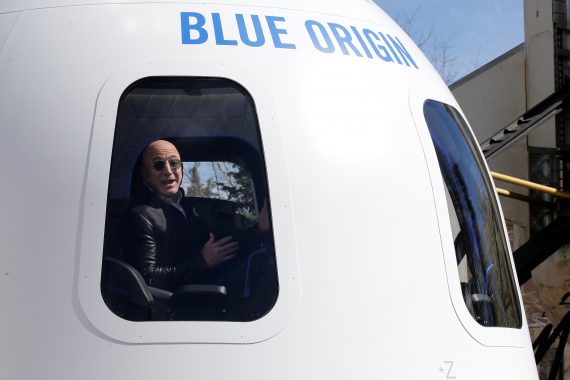 So, what does this mean for Blue Origin, space tourism and private space companies in general? It certainly legitimizes Blue Origin as a player in both tourism and in competing with Elon Musk’s SpaceX for NASA and private satellite launches. Beyond that is anyone’s guess.

What does it mean for the rest of us? As this writer has said before, while the technology is impressive, the money spent could certainly be better used getting and keeping launch pad Earth in shape.

Be that as it may … congratulations Jeff Bezos!

The Mysterious and Tragic Vanishing and Death of Amber Tuccaro